How many guns are in America? A web of state secrecy means no one knows 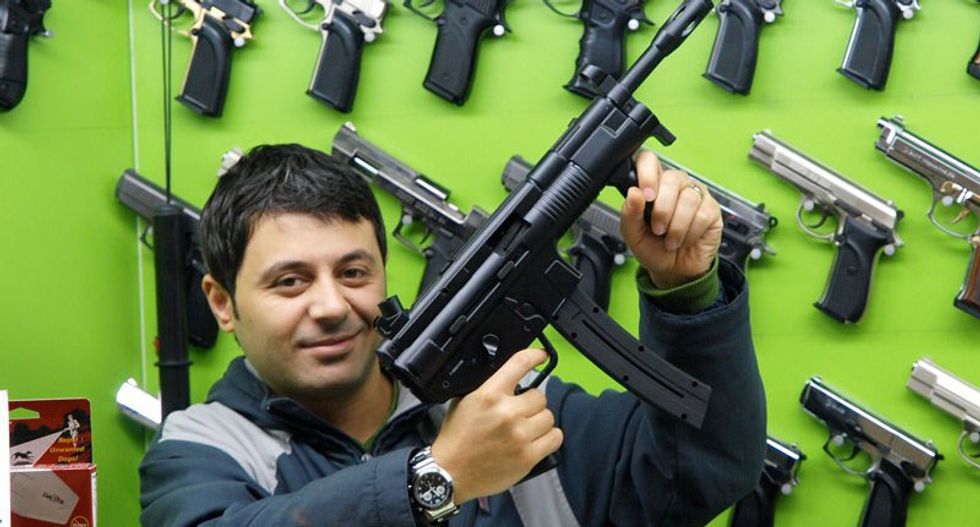 The American Public Health Association joins the Brady Campaign to Prevent Gun Violence in a national summit in Washington DC to tackle gun violence. They describe the issue as “one of the biggest public health issues facing America”.

But you wouldn’t know it from looking at the state of gun research.

Ask one of the dozen or so active firearms researchers in the United States, and they won’t be able to answer the fundamental question: how many guns are in America?

In addition to a 1996 ban on federal funding for firearms research that is cited as one of the most onerous obstacles to treating gun violence as a public health issue, states have passed dozens of laws that make once-public data on gun ownership confidential.

The best available data comes from a private survey by the University of Chicago , not the federal government, and that is still an estimate.

“There are lots of holes in actually having any data on the number of guns in our communities,” said Fred Rivara, head of pediatrics at the Harborview Injury Prevention and Research Center and Seattle Children’s Hospital and a firearms researcher for almost three decades. “You look at, well, are people with mental health problems more likely to have guns, or are people with past problems more likely to have guns, we don’t know because we don’t have that data.”

States have not made the job easier.

From Florida to Maine to West Virginia to Wyoming, a variety of provisions have exempted concealed-carry permit data from public disclosure or stopped permitting altogether. For researchers, these provisions make it impossible to study guns within a given zip code or cohorts of owners who might have run-ins with the law.

“When I first started in gun research back in 1987, we could actually go down to the state capitol in Olympia [Washington] and identify through state records at that point who owns guns,” said Rivara. “That ability was subsequently removed.”

As of 2013, 28 states , including Washington, don’t allow access to gun permit records. Some states, such as Vermont, Wyoming and Kansas, removed permitting requirements. Iowa has worked for years to make gun permit data more secretive. Two counties in the state lent the legislature a hand by destroying all permit applications . New York tightened public access to gun permits after a newspaper north of New York City published a map of permit holders’ names and addresses . In the past five years dozens of laws have exempted concealed-carry permits and applications and gun licenses from public disclosure or made them confidential.

Take one state as an example: Louisiana.

Louisiana has the second-worst firearms death rate in the country, according to the Kaiser Family Foundation , topped only by Alaska. In 2013, 19.3 people per 100,000 died because of a firearms-related injury for every 100,000 people in the state. That rate is equivalent to 14.7 people dying at a single New Orleans Saints football game (where the stadium seats roughly 76,000).

But that wasn’t far enough for legislators in the state. Louisiana lawmakers also made it a misdemeanor criminal offense to release information about concealed-carry permit holders – levying a $500 fine and up to six months in jail for any department of public safety and corrections employee who releases such records, and a $10,000 fine and six months in jail for anyone else who releases that information.

Firearms dealers in Louisiana are also not required to retain background checks or sales records , meaning that if a dealer chooses not to record such transactions there is no way for researchers (or anyone else) to trace guns or oversee the efficacy of background checks.

Some federal data has also disappeared. A firearms trace database operated by the Bureau of Alcohol, Tobacco, Firearms and Explosives once used to publicly shame gun retailers who sold to criminals was made confidential in the early 2000s. And the FBI is required to destroy all background checks .

These state and federal restrictions have compounded challenges for the already-barren field of gun research, which has been barred from federal funding.

In 2013, following the massacre of 20 children and six staff members at Sandy Hook elementary school in Connecticut, Barack Obama signed an executive order that was supposed to lift the ban on firearms research. Congress, however, turned down the president’s request to fund the research.

In firearms violence research, this has been the state of affairs since 1996. At a time when gun violence was among the highest in American history, Congress defunded firearms research and passed a provision many researchers believe had a deep, chilling effect on the pursuit of answers.

At the time, a series of papers funded by the Centers for Disease Control and Prevention became a hot-button issue after scientists began to view gun violence as a public health issue.

One such paper was co-authored by Rivara in 1993. Gun Ownership as a Risk Factor for Homicide in the Home was published in the New England Journal of Medicine, and found that gun owners were more likely to be the victims of homicide, than protected from it. This research drew particular ire in Congress.

“We have here an attempt by the CDC, through the [National Center for Injury Prevention and Control] a disease control agency of the federal government [trying] to bring about gun control advocacy all over the United States,” Arkansas Republican representative Jay Dickey told colleagues during a hearing on his namesake amendment.

The rider, stipulating that “none of the funds made available for injury prevention and control at the [CDC] may be used to advocate or promote gun control”, would stop research into gun violence for the next two decades.

The CDC, Dickey argued, was trying “to raise emotional sympathy for those people who are for gun control”. Congress also yanked $2.6m in funding from the CDC, even as 1.1 million Americans fell victim to gun crime that year alone (In 2011, 439,100 were victims).

“The NRA opposes the CDC injury control research because it wants to suppress the awful truth about gun violence. The NRA simply does not want the facts getting out. It is no more than censorship. It must be stopped,” Lowey said.

Despite her efforts, Dickey’s amendment passed, and firearms research ground to a halt. Nineteen years later, in the wake of a mass shooting inside a church in Charleston, South Carolina, Lowey lobbied for the removal of the same rider she had once been willing to live with to restore funding.

“Preventing research because you worry about the outcome is cowardly,” she said at a hearing , before Congress re-upped (again) the requirement that the CDC not lobby for gun control.

Now, despite $130m in “ violence research ” grants awarded by the National Institutes of Health , no studies explicitly looked at firearms. Nor did any of the $59m in grants devoted to “ youth violence ” or the $16m that went to “ youth violence prevention ”.

“The lack of research has been so detrimental because not only do we not have the research funding, another thing I think that’s really important is that it’s been a huge blow to the trained workforce,” said Susan Sorenson, a researcher at the University of Pennsylvania who studies gun violence as a public health issue.

In the United States, researchers are required to generate their own grant funding for projects, including for lab time, salaries and equipment.

“If there’s no funding, that researcher simply is not going to have a job, so they go into fields that are more heavily funded – cancer, tobacco, HIV – simply because they too need to be able, like all humans, to eat, to have a place to live,” Sorenson said.

As scientists struggle to rebuild a field Sorenson called “nascent”,

The Seattle city council funded research studying whether people who go to the hospital for gunshots were likely to later be the victims of violence (they are). The Chicago-based Joyce Foundation is cited by researchers as one of the only private foundations willing to provide money for research and firearms researcher Dr Gary Wintemute donated about $1.1m of his own money to fund his research.

“Better data, and data systems, are needed. Interventions must be evaluated, and those evaluations must help guide further efforts,” wrote Wintemute in an editorial for the Journal of the American Medical Association . “Until we revitalize firearm violence research, studies using available data will often be the best we have. They are not good enough.”