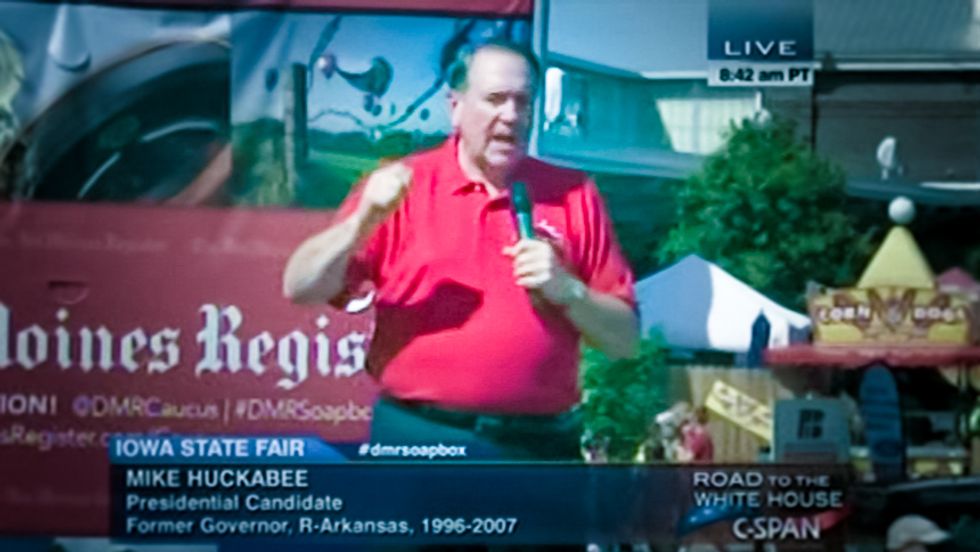 At Wednesday night's GOP presidential debate on CNBC, former Arkansas Gov. Mike Huckabee gave something of a solipsistic answer to question of how to solve America's health care crisis.

“We don't have a health care crisis in America, we have a health crisis,” he said, according to Right Wing Watch. “And until we deal with the health of Americans and do what we did with polio  -- when I was a little kid, we eradicated it. You know how much money we spent on polio last year in America? We didn't spend any. We’ve saved billions of dollars.”

Right Wing Watch's Brian Tashman noted, however, that vaccines for polio and other diseases were created through the use of fetal tissue.

Earlier this year, when the fracas generated by a series of deceptively edited Planned Parenthood "sting" videos was at its height, CNN published an article explaining exactly how fetal tissue is used in medical research.

"One of the earliest advances with fetal tissue was to use fetal kidney cells to create the first poliovirus vaccines, which are now estimated to save 550,000 lives worldwide every year," wrote Carina Storrs.

"In the early days of making the vaccine, researchers infected fetal kidney cells in Petri dishes to produce a large amount of virus that they could then harvest, purify and use to vaccinate people," she explained.

"Many of our other common vaccines, such as chicken pox, rubella and shingles, have been produced in tissue derived from fetuses, particularly two electively terminated pregnancies from the 1960s.”

Tashman said, "Seeing that Huckabee has floated the idea of using the National Guard to raid abortion clinics and promised to outlaw abortion by executive fiat, he should probably give a close look into the development of the polio vaccine."

At one point in the 1960s, the U.S. attempted to move away from fetus-derived polio vaccine by researching animal-derived vaccine formulas. Some researchers and outsiders were squeamish about the dependence upon aborted fetal tissue.

However, the animal-derived vaccine cell lines became contaminated with a simian virus, prompting a return to the human cell lines researchers originally favored.