Mike Huckabee: Mass shootings are 'not so much a gun problem... we have a problem with sin' 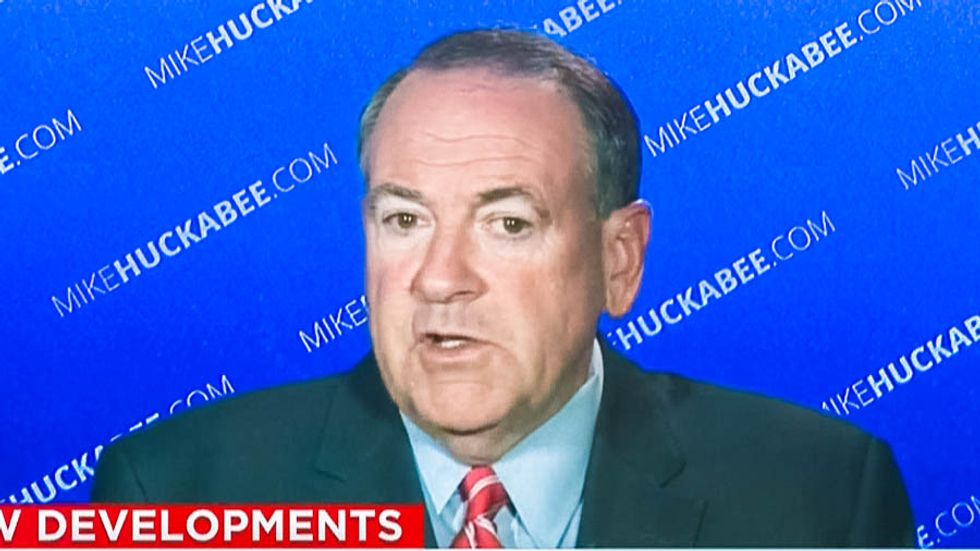 Republican presidential candidate Mike Huckabee asserted on Monday that gun safety laws could not curb mass shootings because the real problem was "sin and evil."

During an interview on CNN's New Day, the former Arkansas governor told host Alisyn Camerota the Umpqua Community College gunman who killed nine people could have been stopped if his family had intervened.

"He exhibited some traits and attitudes that were warning signals but nobody acted on them," Huckabee explained. "And he was able to obtain those weapons, some of which came apparently from his mother, some that he obtained."

"We always talk about what the weapon was, but whether it's a pressure cooker or whether it's a gun, we're dealing with people who are either deranged or they're very focused because they want to kill people in the name of terrorism," he continued. "We have not so much a gun problem, we have a problem with sin and evil."

Huckabee added that the massacre could have been prevented if his family had reported the shooter to authorities.

Camerota, however, pointed out that authorities did not have the ability to take someone's guns based on reports of odd behavior.

"There is no law that on the books that would allow the police to show up and do anything with that person," she noted. "That's the problem. We can all agree that there's a mental health component here with the latest mass shootings that we've seen, but there is no law to stop it."

"I think you are in a very dangerous zone," Huckabee replied. "There is no law which prevents people from doing things that are violent. There are a lot of crimes that nobody sees coming until it's too late."

"This is a matter of evil, it's a matter of culture in which some people, this guy for example, wanted to be famous," the GOP hopeful opined. "We could stop most of the car wrecks if we restricted speeds down to 25 miles per hour. There would be very few car accidents if no care was allowed to go faster than 25 miles per hour."

Instead of restricting the ability of people to get firearms, Huckabee argued that more guns should be allowed on campuses.

"Every one of these shootings happened in a gun free zone," he observed. "We can say we're going to have more gun free zones but that ends up being the worst thing because it just gives the shooter real confidence that he walks into that environment and he's the only one armed."

"Seven hundred people a year get killed because somebody beats them up with their fist," Huckabee concluded. "We don't make a big deal out of that because there's a lot of people that get killed in a lot of ways, but a gun crime gets most of the attention."

According to the Center for Disease Control, firearms kill more than 30,000 people each year in the United States.