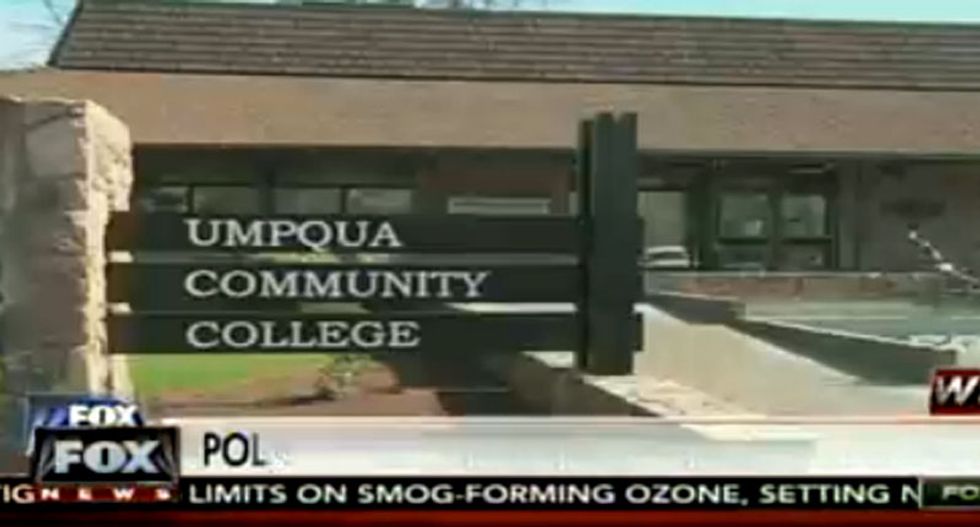 Students were welcomed back on Monday by grief counselors and comfort dogs to the small Oregon community college shattered by a shooting rampage that left 10 people dead, though classes were to remain canceled through the week.

The campus of Umpqua Community College in Roseburg, about 180 miles (300 km) south of Portland, was reopened to registered students and staff four days after the massacre, allowing them to retrieve vehicles and other belongings left behind in Thursday's pandemonium.

The reopening also was aimed at helping restore a sense of normalcy on campus before classes and other activities at the college of some 3,000 full-time students were due to resume next Monday, school officials said.

While the bucolic college, situated on a bend in the North Umpqua River, appeared peaceful as staff and students milled about, an atmosphere of trepidation prevailed among some of those returning on Monday.

"The anxiety of walking back on campus is very real," student Jared Norman said in a text message to Reuters, adding that his campus visit "begins the road to recovery."

He and other students met with the college student-life director on Sunday night in preparation for their return.

Students were greeted by teams of volunteers with six golden retrievers from the national K-9 Comfort Dogs network run by Lutheran Church Charities.

The group has worked at the scenes of various recent tragedies, including the Sandy Hook Elementary School massacre in Newtown, Connecticut, where 20 children and six adults were shot to death by a gunman in December 2012, said Richard Martin, a volunteer from Northbrook, Illinois.

The college bookstore also was reopened, and an outdoor amphitheater on campus was set up with tables adorned with bouquets of flowers flanked by wreaths on stands, one with the message: "We Will Always Remember."

Law enforcement was not readily visible in the center of campus, but a mobile command post of the Douglas County Sheriff's Department remained set up in the parking lot.

A permanent billboard along the main road leading onto campus greeted returning faculty with the message: "Welcome back staff" in black capital letters.

The sunny, quiet tranquility stood in stark contrast to the fear that gripped the campus last Thursday in the midst of the deadliest U.S. mass shooting in two years and the bloodiest in Oregon's modern history.

A gunman, later identified as Christopher Harper-Mercer, 26, stormed into his writing class in Snyder Hall, shot the professor at point-blank range and began picking off cowering classmates one at a time as he questioned them their religion, according to survivors' accounts.

The assailant ultimately died of a self-inflicted gunshot wound after exchanging shots with police officers who arrived on the scene to confront him. Besides the English professor and eight students slain in the rampage, nine other people were wounded, three of them critically.

Parents of two survivors revealed over the weekend that the gunman had handed an envelope to one of the male students in the class, whose life the suspect deliberately spared. CNN reported on Sunday that the envelope contained a computer flash drive that the surviving student turned over to authorities immediately afterward.

Authorities said Harper-Mercer, who moved from the Los Angeles suburb of Torrance, California, to Oregon with his mother in 2013, carried six guns, five magazines of bullets and body armor with him to campus the day of the killings.

Another eight firearms and a stockpile of ammo were recovered from the apartment he and his mother shared a short distance from the college, officials said.

Authorities have revealed little of what they may know about Harper-Mercer's motives. The FBI and local sheriff have declined to comment on media reports that he left behind racist writings.

People who knew him casually have described Harper-Mercer as a withdrawn, socially awkward loner. After a brief, failed stint in the U.S. Army that ended with an administrative discharge, he graduated from a nonprofit school in Torrance that catered to students with learning and emotional disabilities.

He was by all accounts preoccupied with guns, a passion he was reported to have shared with his mother, who spent time with her son at target ranges.

The head of a private firearms academy in Torrance has said Harper-Mercer sought to register for classes there in 2012 or 2013 but was turned away because he was found to be "weird" and overly eager for high-level weapons training at his age.