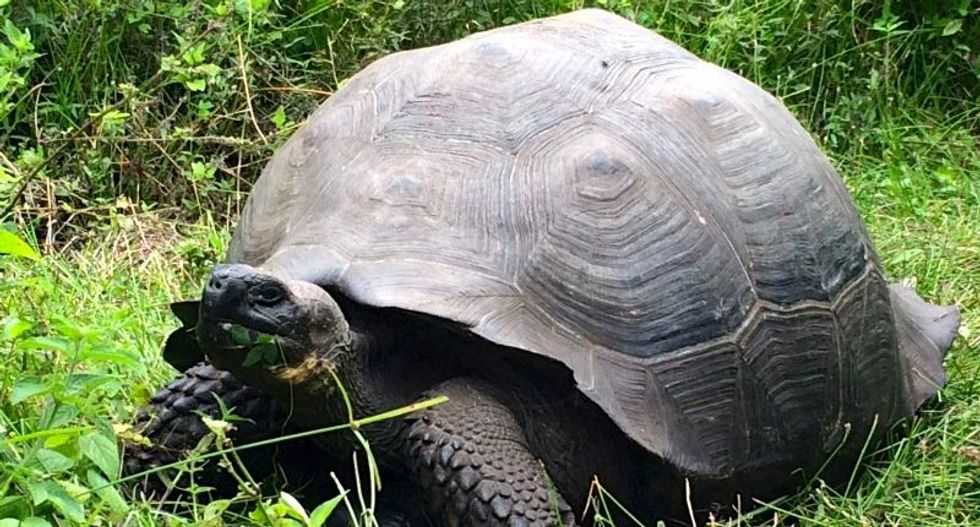 An Eastern Santa Cruz tortoise, Chelonoidis donfaustoi, is pictured on Santa Cruz Island in the Galapagos Islands in this undated handout photo obtained by Reuters October 21, 2015 REUTERS/Adalgisa Caccone/Handout via Reuters

Scientists have identified a new species of giant tortoise on the Galápagos Islands, using genetic data to determine that a group of 250 of the slow-moving grazing reptiles was distinct from other tortoise species residing in the Pacific archipelago.

The newly identified species lives in a 15-square-mile (40-square-km) area of Santa Cruz Island and is as different genetically from the other giant tortoise species on the island as species from other islands, the scientists said on Wednesday.

The research differentiated the new Eastern Santa Cruz tortoise, given the scientific name Chelonoidis donfaustoi, from a larger population of about 2,000 tortoises living about 6 miles (10 km) away on the western part of the island that belong to the species Chelonoidis porteri.

Scientists long had thought all the giant tortoises on the island were from the same species.

"Its closest relative is not the species on the same island but a species from the neighboring island to the east, San Cristobal," Yale University evolutionary biologist Adalgisa Caccone said.

The researchers used two types of genetic data to determine that it merited being recognized as a separate species, bringing to 15 the number of Galápagos giant tortoise species.

In addition to genetic differences, the two Santa Cruz Island species also differ in the shape of their shell, with the Eastern Santa Cruz tortoise having one with a more compressed shape, Caccone said. The newly identified species lives in a drier part of the island, Caccone added.

Giant tortoises, which can reach some 500 pounds (225 kg) are among the famous creatures of the Galápagos Islands closely studied by 19th century British naturalist Charles Darwin.

"It is part of the process of understanding the evolutionary history of this iconic group that inspired Charles Darwin when he visited the islands and certainly contributed to the development of his theory of evolution via natural selection," Caccone said.

The Galápagos Islands are one of only two locales inhabited by giant tortoises, along with the Indian Ocean's Aldabra Atoll. Galápagos tortoises graze on grasses, leaves, cactus and fruit but can survive up to a year without food or water.

The tortoises, classified as endangered, were hunted almost to oblivion by sailors who stashed them in the holds of ships as food during lengthy sea voyages.

The findings were published in the journal PLOS ONE.