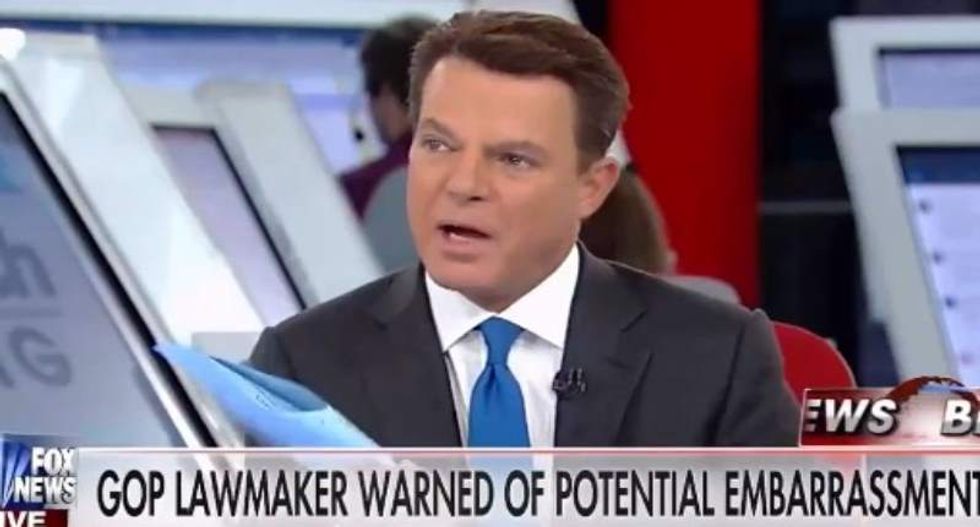 Fox News host Shepard Smith had Rep. Walter Jones (R-NC) on the ropes on Thursday, as Smith pushed the congressman to reveal why he alluded to rumors that then-House Speaker candidate Kevin McCarthy (R-CA) was hiding an affair.

"When you said, 'I'm asking that any candidates for Speaker of the House, Majority Leader or Majority Whip withdraw himself from the leadership election if there are any misdeeds that he has committed since joining the Congress, and then you wrote, 'I believe this is important to the integrity of the House,' you've written and now I have to ask; what did you know?" Smith asked. "Who writes such a thing in a vacuum? Who fishes in such a way?"

"Shep, this is the first time I've been on your show," Jones replied. "You don't know me."

"No I don't," Smith countered. "But I know what you've written, and that's why I'm asking the question."

"I will tell you this," Jones said. "if you ask any member of Congress in either party, 'Do you think Walter Jones is a man of integrity?' I'd be very disappointed and surprised if anybody said other than I try to be a man of integrity."

"Oh sir, I have never questioned your integrity -- I would never do so," Smith responded. "What I've done is read your words of warning and asked why they were written."

“You've written something so serious I have to ask the question again because you just didn't answer," Smith said at one point. "Since you wrote this, I feel like we all deserve an answer."

But another conservative host, Erick Erickson, noted that the email also contained links to Internet posts regarding rumors of an affair between McCarthy and Rep. Renee Elmers (R-NC).

"It is worth noting that the two deny a relationship," Erickson wrote. "But the email began circulating pretty heavily. Conservatives were buzzing about it. The first line pointed to the current scandal about Denny Hastert and concluded suggesting that if the rumor about McCarthy and his personal life were true, he was a national security risk."

On Thursday, Jones repeated his statement from the letter saying it came out of a desire to avoid controversies involving the next House Speaker that would generate "chaos" similar to the kind that followed Newt Gingrich's resignation from the post in 1998. But Smith pressed him throughout the interview.

"This doesn't sound like a man who is on a fishing expedition," the host said. "This sounds like man who knows something he's not talking about, doesn't it? I mean, If you didn't write this, wouldn't you think that?"