Spare me this sanctimonious Australian self-congratulation after US gun massacres 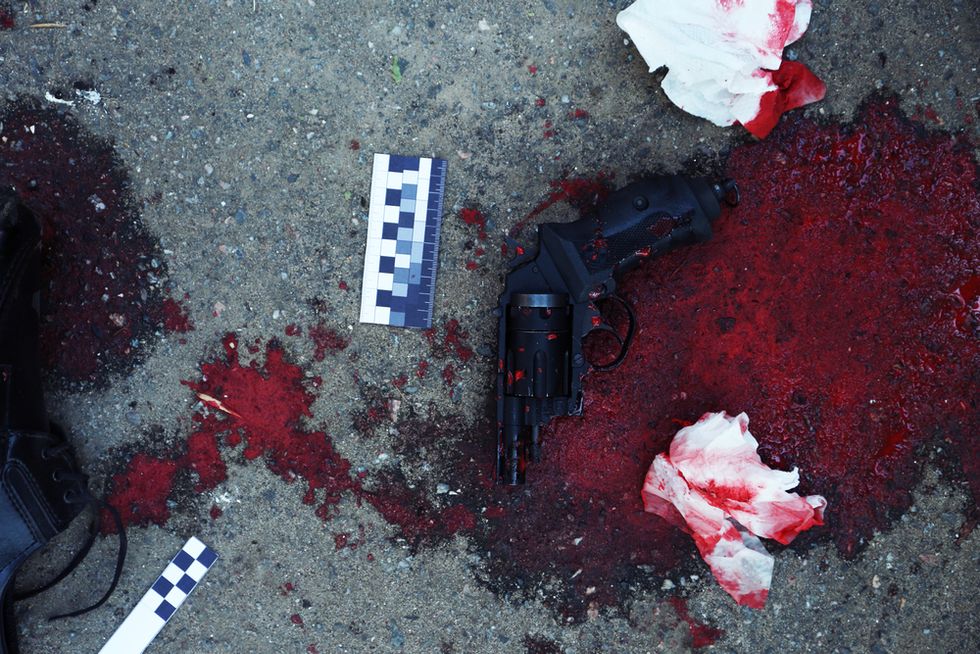 Image: Gun and blood at crime scene via Shutterstock.com

Barack Obama remarked last week that gun massacres have attracted a “routine” response. I found no such response was available to me when I drove down to Roseburg from Portland last week to help cover the shooting at Umpqua Community College in Roseburg for Guardian US. The impact of such a horrific event in a small, conservative, quite religious community was too messy.

A routine response is also true of international reaction to US gun violence, especially in Australia, where mass murders provoke self-congratulatory commentary on the gun laws passed in 1996 by the conservative government of former prime minister John Howard.

Like all Australians, I’m familiar with this genre of commentary. But up close the reality of gun violence in the US seems too complex for mere homilies. People in Roseburg were brittle, suspended between the event and a full awareness of its consequences.

Further away, the temptation to fall into the routine of moral grandstanding proved too strong. You may have read the Fairfax and News Corp editorials. You may have heard calls from Gun Control Australia to boycott the US. Or you may have read Michael Pascoe’s column the other day, where he rejected Obama’s comparison of the US to Australia in his impassioned speech about gun law reform.

“Australia is not like the United States,” Pascoe wrote. “We decided not to be.”

We decided to grow up instead and become a more reasonable, rational society that explicitly values human life and prefers to think the best of people, rather than the worst.

The US is too immature a society to be allowed to play with guns. It has never shed its Wild West mythology.

In the midst of a shellshocked community which was yet to fully absorb its losses – Pascoe’s remarks, and a lot of social media commentary with a similar tone, seemed to me sanctimonious, useless and mostly wrong.

For one thing, rational societies that value human life probably ought not lock up refugee children in camps as a matter of political expediency. A truly mature society might have found time to reconcile itself with the Indigenous people whose land it stole.

Jumping on foreign tragedies as a means of talking up Australia’s enlightened political culture always risks blinding oneself to our own affronts to human life and human dignity.

More immediately it glosses over the fundamental reason that Australia was able to introduce strict gun control where the United States was not. It was not that the nation “grew up”, whatever that could possibly mean. It’s that there were fewer structural impediments to introducing the necessary laws at an opportune moment, a process which was almost entirely top-down.

John Howard was able to do what Barack Obama cannot because, while Australia’s workmanlike constitution prescribes few individual rights at all, the US supreme court recently interpreted the Second Amendment as protecting the individual right to gun ownership.

The most crucial decision, affirming the right of individual citizens to keep handguns for defending their homes, came in 2008 . compYet as recently as the 1970s, it was taken for granted that the Second Amendment only allowed for citizens to keep guns in connection with military purposes (as part of a “well-regulated militia”).

The changes here are not as a result of inborn national immaturity, or frontier psychology, but an extended and successful political campaign from activists, including the NRA, which includes lobbying, disbursing cash to political candidates, and broader PR efforts.

These activists only redoubled their efforts when they saw the regulations that countries like Australia developed. Howard faced opposition, but not of that scale, depth, and intensity. Australia’s gun lobby had no constitutional leverage to work with.

Furthermore, in the political aftermath of the Port Arthur killings, Howard was able to implement uniform national laws with the cooperation of all state governments.

The reason Obama appealed directly to voters in his speech last Thursday is that he knows he couldn’t get this kind of buy-in from most states, nor from the other branches of government in Washington.

Part of the reason that some of these other politicians won’t go along with Obama is, no doubt, that they are funded by pro-gun activists or manufacturers. But part of the reason is that they don’t want to get too far out of step with their constituents.

(This isn’t necessarily owned by the Republican party, either. Even Oregon’s liberal Democrat governor is not saying or doing anything dramatic about further gun control.)

Many Americans are apt to defend their right to have weapons. As Guardian US reporter Rory Carroll found , Roseburg’s gun store saw a spike in sales following the shooting.

“There’s always a rush on them after a big shooting. We can’t keep the stuff on the shelves,” the owner told Carroll. This is not reducible to some “Wild West mythology”.

A significant part of America has a different value system through which events like mass killings are interpreted. Guns represent safety for those who feel their values are under attack. That’s only reinforced in conservative communities when killers specifically execute Christians, as was the case in Oregon.

While I utterly disagree with their perspective, it needs to be recognised that these values are compelling and coherent for those who hold them. They may not be a majority of the country’s citizens, but they do vote. They’re a majority in enough communities to ensure the current deadlock.

A massive conservative media apparatus caters to this constituency; it too thrives on the sense that they are under siege by the federal government, elites, the liberal media, and foreigners. It’s a major obstacle to reform entrenched further by the kind of mocking, berating tone of much satirical criticism of gun violence – like John Oliver’s widely-shared interview with John Howard.

It may be better for Australians to respond to mass shootings by checking their own complacency. In the NSW parliament and in the Australian senate, there are people successfully chipping away at gun control laws. No political settlement is invincible.

We should also think about the other contributing factor in such events. The profile that has emerged of the Roseburg killer is strikingly similar to that of Port Arthur massacre shooter Martin Bryant. Again and again, in the US, such outrages are perpetrated by alienated, socially disconnected young men.

They often have serious mental health problems that fester once they disappear from the deteriorating network of social services. It is a very good thing that it is difficult in Australia for people like this to get hold of guns in a moment of crisis. Too often this means that they are simply ignored, and succeed in doing harm to themselves or those who are close to them, especially their domestic partners.

In the midst of a domestic violence epidemic, can we say that mental health and social welfare services are any better in Australia’s provincial towns – Mackay, Mandurah, Mildura – than they are in Roseburg, Oregon?

If, as Michael Pascoe wrote, we were capable of “growing up” over gun violence we would take action again, rather than emptily pontificating on distant tragedies.