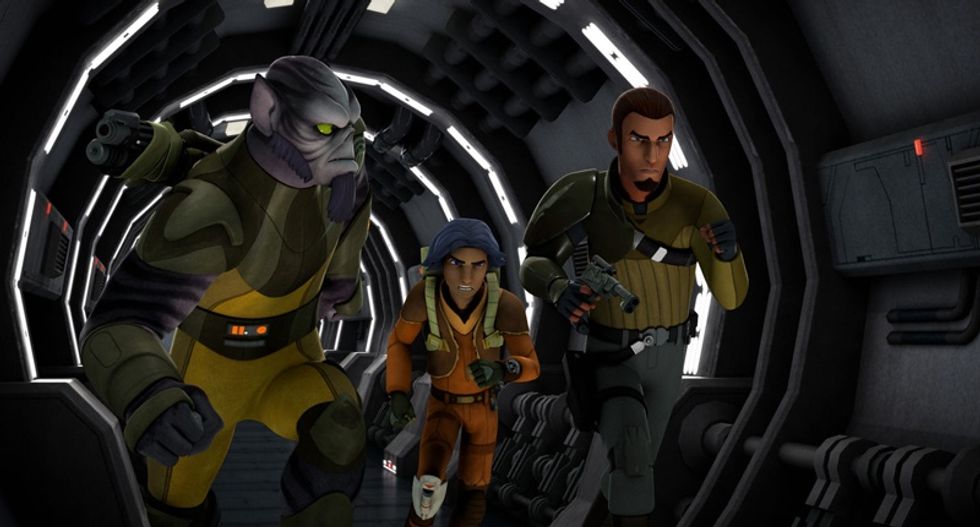 The Force is calling to moviegoers, and they are eager to let it in.

"Star Wars" mania reached a new high as fans overwhelmed cinema websites selling advance tickets for the next installment in the blockbuster intergalactic saga, and the new trailer for the film instantly went viral.

The huge demand from keen fans in the United States and Britain seeking to secure their seats for the first screenings of "The Force Awakens" -- which hits US screens on December 18 -- led to site crashes and loading issues.

"Certain cinemas are being overwhelmed with requests," said Odeon, a leading cinema chain in Britain. "The website has taken a battering today.

"We're trying to fix the problem as quickly as possible. Please bear with us as we summon the Force."

Vue Cinemas in Britain said Jedi fans snapped up 10,000 tickets in the first 90 minutes of tickets going on sale.

"Star Wars: Episode VII -- The Force Awakens" is one of the most eagerly awaited films of the year, and the first in the series in a decade.

The trailer, which premiered during Monday Night Football on Disney-owned ESPN, quickly set Twitter -- which even created special emojis for certain "Star Wars" hashtags -- and other social media sites alight.

The preview -- which runs about two and a half minutes -- features black-clad villain Kylo Ren looking at a crushed mask of Darth Vader and vowing: "Nothing will stand in our way. I will finish what you started."

A damaged Tie-Fighter spins through space. The Millennium Falcon and X-Wing Fighters zoom through the air. Epic battle scenes erupt on a desert planet and over snowy mountains.

The trailer ends with a female voice -- possibly Princess Leia (Carrie Fisher), who appears for the first time in this preview -- saying, "The Force -- it's calling to you. Just let it in."

Disney had previously released two "teaser" trailers for the film and on Sunday released the poster. Monday's trailer is the last before the film comes out.

"The Force Awakens" takes place 30 years after "Return of the Jedi".

In the trailer, the events of the original films seem to have become the stuff of legend. Han Solo (Harrison Ford) tells some of the new characters, "It's true... all of it."

The new film will feature some new faces but also several members of the original cast including Fisher, Ford and Mark Hamill (Luke Skywalker).

The two beloved droids, C-3PO and R2-D2, will be back, as will Chewbacca, Han Solo's co-pilot.

The absence of Skywalker from the movie's poster has fueled speculation as to what role he will play in the new movie. Many on Twitter suggested Monday that he is the cloaked figure with a robotic hand touching R2-D2 in the trailer.

"Star Wars" has attracted generations of loyal fans ever since the first film arrived nearly 40 years ago, creating a signature moment in the history of popular culture and launching one of the biggest movie franchises ever.

Walt Disney Company bought the rights to the saga created by George Lucas when it purchased Lucasfilm three years ago for $4 billion.

Disney soon announced plans for a new trilogy in the series, with acclaimed Hollywood director J.J. Abrams being entrusted with "The Force Awakens." Other standalone films are also planned -- "Rogue One" is due in December 2016.

The company has launched a carefully orchestrated mega-marketing campaign for "The Force Awakens."

Analysts expect merchandise sales to reach up to $5 billion this year, with everything from light sabers to action figures and even pet gear on offer.

Super fans of the saga will also be able to book tickets for marathon viewing of the first six installments in the series before Episode VII.

The entertainment site Deadline has predicted that the movie could rake in a record-setting $615 million when it opens during the busy Christmas season.