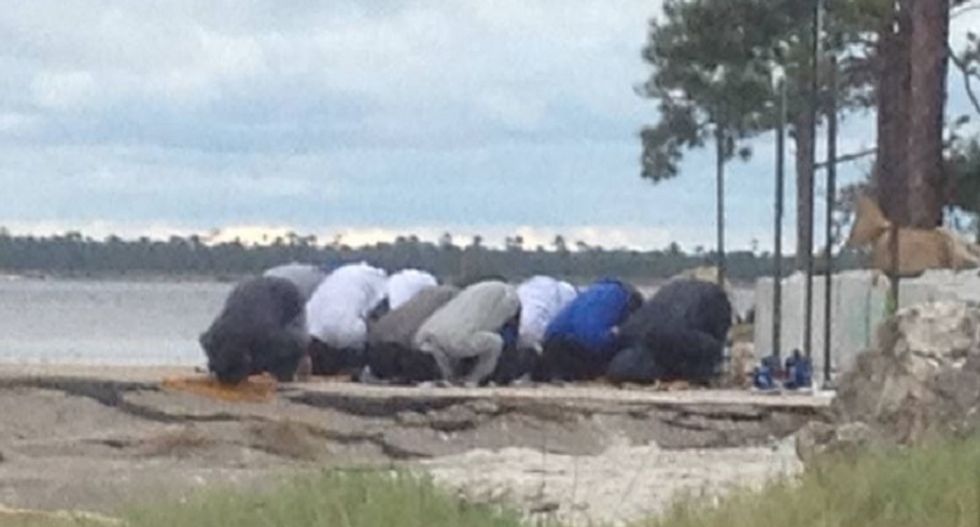 A photo taken by a Florida county commissioner of a group of men observing their Muslim faith has ignited a xenophobic backlash that spilled over into a recent government meeting, WTXL reports.

"I'm raising the question of whether or not a group of military aged Muslim men... are praying on our beach, well label me whatever you want," said Wakulla County Sheriff candidate Will Dance, according to WTXL. "The reason I brought this up is because my daughters use that beach, my wife uses that beach and gentlemen, under Sharia Law, the cutoff shorts and tee-shirts... that my family wears on that beach are considered offensive under Sharia and any Muslim man may carry out what he feels is fit punishment. And I'm sorry but that type of behavior cannot happen here."

Muslim leader Imam Amro was interviewed by WTXL and assured people that in general, no Muslim would retaliate against anyone not wearing modest clothes because it's none of their business.

"A sick brain, then you will find it in Islam and in Christianity, in any religion there is a sick brain, but this is something else," he said. He also pointed out that Sharia is a divine religious law that is not forced on people who don't know what it is or don't want it.

Devout Muslims pray five times a day facing Mecca, which is what the picture seems to portray. Responses on Thomas's post show a great deal of fear at what appears to be nothing more than routine prayer.

"This is a prophesy in the bible, that nations will go into a Religious War, but us Believers in Christ, do not fear, for we know the final outcome, Victory in God The Father, God The Son, God The Holy Ghost! And we shall all meet in Heaven!" wrote Becton Rodenberry.

"Ralph-- The WBCC needs to put up a sign: 'Warning! Bacon Grease Dumping Site,' Greg Williams wrote. He may have presumed this humorous because observant Muslims don't eat pork.

Nyle Strain questioned Thomas for posting the picture in the first place, and confronted him for not taking issue with bigoted responses to the post.

"[A]s you are a County Commissioner, and an elected representative of ALL citizens in this county, you could present yourself in a higher light by decrying the bigoted comments made by those persons above in this thread. To do otherwise could be construed as the 'appearance of impropriety', something which we, as servants of the citizens of the great State of Florida, are forbidden by law to demonstrate," Strain wrote.

Vanessa Moore is the mother of one of the men who happened to be at the beach and was caught in the photo. She says her 29-year-old son never expected to attract attention and worried about the implications of the anti-Muslim hate on display.

"He never wanted to be in anyone's spotlight, he was just out there, at a barbecue, praying," she told WTXL. "Hatred only leads to more hate, so now are you going to make every Muslim carry a card that says, 'I'm a good citizen, I'm not affiliated with ISIS, I just want to pray.'"

Dance, who hosts a radio show, told WTXL that he doesn't think the federal government is doing its job and "it's the county's responsibility to make sure that its citizens are safe." He, in turn, has received death threats, the station reports.

On Dance's Facebook page, he posts things like, "There is no Place in US Society for Shari Law, and I wrong? And if yes how so?" He included a video on "Sharia versus the Constitution" created by anti-Muslim group American Center for Law and Justice.

In another post, he says he would ask all "Sharia Muslims" to leave "my" country quickly, and also makes the claim that the Constitution is the "second greatest document ever inspired by OUR GOD."

"#Truth there it is again. It is so hard to get away from. Throughout my career of Law Enforcement, Fire Rescue, and Pirate Hunting, one #Truth was consistent. Radical Islam was always a threat to the way of life that I love," he wrote. "Are you a Constitutional Muslim, Or a Sharia Muslim? Because if you are a Sharia Muslim, I will kindly ask you to leave my country as quickly and efficiently as you can. Yes we will watch you until you leave, and will give you any assistance necessary up to and including monetary, to assist your safe and rapid departure."

"Sharia Muslims" seems to be a term invented by Dance, since in the faith there are Sunni, Shia, Sufi and other types but no "Sharia Muslims."

One woman at the commission meeting tearfully said she's seen threats on social media to lynch Wakulla residents who are not Christian.

Thomas remained steadfast in his claim that he did the right thing posting the picture.

"I am a fortunate man, blessed indeed," he wrote. "I have wonderful friends and family and I appreciate each of you! I don't regret posting that photo on Saturday! I would do it again!"