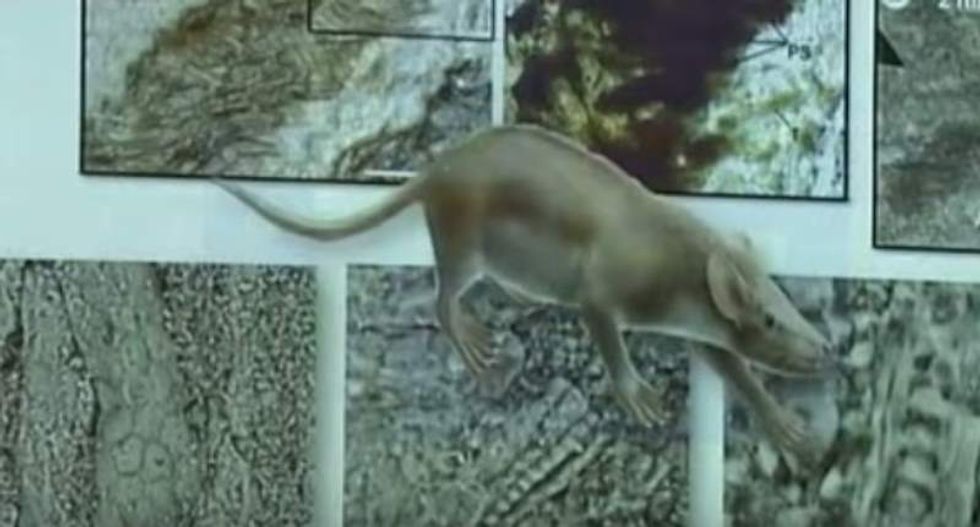 A small rat-like mammal that lived and died in a swamp 125 million years ago was so well preserved by the fossilization process that its fur, skin and organs are still visible today.

The remains, unearthed in a quarry near Cuenca in central Spain, are more than 60 million years older than other fossils that record the soft tissues of prehistoric mammals.

The animal’s ear lobe, lung and liver are all fossilized, along with its furry pelt and tiny hedgehog-like spines on its lower back that likely protected it from predators. Researchers even found evidence of a fungal skin infection in the remains.

Named Spinolestes xenarthrosus, the insect-eating furball was discovered in 2011 when fossil hunters at the Autonomous University of Madrid, were prying apart thin leaves of fine limestone sediment in the Las Hoyas Quarry.

“The preservation of its soft parts is stunning,” Thomas Martin, a professor of paleontology at the University of Bonn who studied the fossil told the Guardian. “The hairs have the same structure and diversity as those seen on modern mammals.”

Small, stiff spines on the animal’s lower back are thought to have offered some protection from predators such as pelecanimimus, a many-toothed, meter-long ostrich-like creature that lived alongside Spinolestes. The back spines may have come off easily, filling predators’ mouths with hard, rigid spikes. These defenses were bolstered by tiny scales on the animal’s lower back, much like primitive versions of armadillos’ plates.

Martin believes the creature was so well preserved because bacterial films grew over the animal within hours of its death. These biofilms can form a protective coating, preserving the soft tissues long enough for them to fossilize over much longer periods of time.

Spinolestes, meaning “spiny robber”, belongs to an extinct lineage of early mammals called triconodonts. At 24cm long and no more than 70g, it was no bigger than a modern rat.

The specimen is the first example of a Mesozoic mammal with fossilised soft tissues in the thorax and abdomen. Tiny bronchiole structures of the lung were found in the remains, along with reddish, iron-rich residues from the liver. The parts were separated by what appears to be a diaphragm. Together, they form the earliest-known record of mammalian organs.

Some of the hairs on the creature were unusually short, which the scientists describe in the journal Nature as evidence for a fungal skin infection.

In a separate report published in the journal, Plos One, researchers in Belgium describe a prehistoric nest of baby Saurolophus dinosaurs complete with prehistoric egg shells. Leonard Dewaele at Ghent University and colleagues found the remains of three or four babies with two broken egg shells at a site called Dragon’s Tomb in Mongolia.

The dinosaurs are thought to have been born into a nest on an old river bank in the Upper Cretaceous and died either in their eggs or soon after birth, only later being buried by river sediment during the wet summer season.

Watch a report on the discovery, as aired on Spain's Agencia EFE, below.