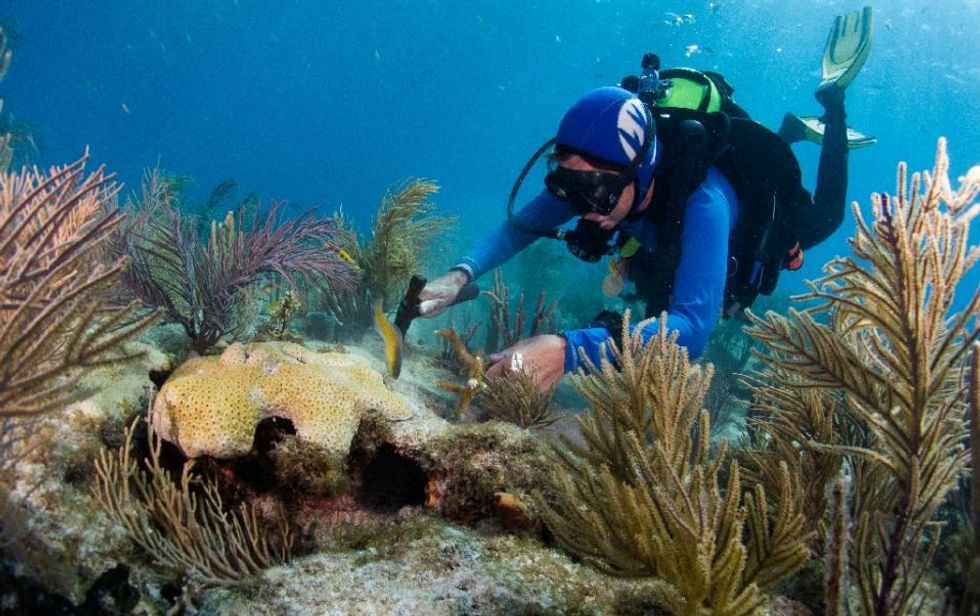 The world's coral reefs, like this outcrop being tended by diver Patti Gross in the Florida Keys on May 23, 2015, are threatened by a chemical found in thousands of sunscreen products, researchers have warned (AFP Photo/)

Oxybenzone -- also known as BP-3 or Benzophenone-3 -- is found in more than 3,500 sunscreen products worldwide, said the study in the latest edition of the Archives of Environmental Contamination and Toxicology.

The chemical gets into the water via swimmers and wastewater from coastal septic systems.

Global scientists announced earlier this month that a massive global coral bleaching event is already under way, made worse in some parts of the world by warming waters brought on by El Nino.

Coral reefs have been in decline for decades, and face multiple threats including pollution, climate change, storms and disease.

Oxybenzone, which blocks ultraviolet rays, causes "gross deformities" in baby coral, "damages their DNA, and, most alarmingly, acts as an endocrine disruptor," said the study.

The effect is forcing "the coral to encase itself in its own skeleton, leading to death."

Even more worrying, scientists observed the harmful effects of the chemical even when it was highly diluted -- as low as 62 parts per trillion, or the same as "a drop of water in six and a half Olympic-sized swimming pools," the study found.

Far higher concentrations of oxybenzone were measured near coral reefs in Hawaii and the US Virgin Islands -- ranging from 800 parts per trillion to 1.4 parts per million.

"This is over 12 times higher than the concentrations necessary to impact on coral," the study said.

Researchers estimate that between 6,000 and 14,000 tons of sunscreen lotion are emitted into coral reef areas each year.

Oxybenzone makes up between one and 10 percent of those lotions.

Since not all reefs are located near tourist areas, scientists believe that about 10 percent of global reefs are at high risk of exposure to sunscreen lotion damage.

"The use of oxybenzone-containing products needs to be seriously deliberated in islands and areas where coral-reef conservation is a critical issue," said lead author Craig Downs of the Haereticus Environmental Laboratory in Virginia.

"Everyone wants to build coral nurseries for reef restoration, but this will achieve little if the factors that originally killed off the reef remain or intensify in the environment."

Oxybenzone is not only found in sunscreens, but also lipstick, mascara and shampoo.

The European Union's International Chemical Secretariat has already established it as a threat to human health and called for it to be replaced with another, safer ingredient.

The report notes that the author of the controversial "The Satanic Verses" was just about to speak when his attacker rushed the stage punching and reportedly stabbing him.