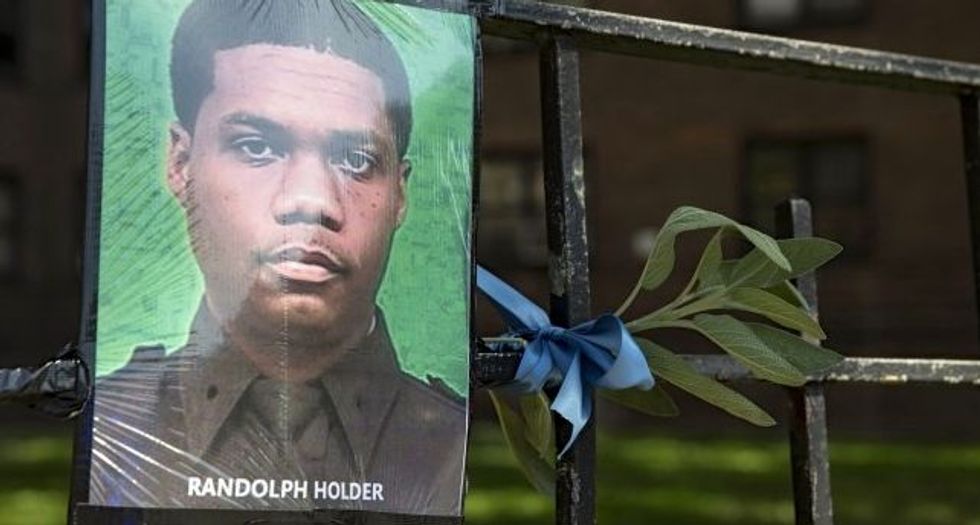 A makeshift memorial is pictured near the scene where the shooting of officer Randolph Holder occurred in the Manhattan borough of New York, October 21, 2015. REUTERS/Andrew Kelly

The man suspected of killing of a New York City police officer late on Tuesday had been the subject of a weeks-long manhunt by detectives seeking him in connection with a gang-related shooting last month, police said on Wednesday.

Police said Tyrone Howard, 30, shot Officer Randolph Holder in the head around 8:30 p.m. in the city's East Harlem neighborhood on a pedestrian walkway above the Franklin D. Roosevelt East River Drive, a highway that runs along the east side of Manhattan.

Howard, who has an extensive criminal history, was a suspect in the Sept. 1 shooting of a gang member in the same area, according to James O'Neill, chief of department for the New York City Police Department.

He was also one of 19 people arrested in a major drug operation last October. They all lived in a public housing complex in East Harlem about 15 blocks from Tuesday's shooting.

"He would have been the last person in New York City I would have wanted to see in the diversion program," said Bratton, who suggested reporters ask the office of Manhattan District Attorney Cyrus Vance why Howard was not behind bars.

Representatives for Vance's office did not immediately respond to a request for comment.

O'Neill said detectives had made numerous attempts to arrest Howard, most recently on Sept. 16, but they had failed to locate him.

"They were hunting him but obviously were unsuccessful," he said at a press conference on Wednesday with city and police officials.

Holder, 33, a native of Guyana, was a third-generation police officer whose father and grandfather served in his native country.

Holder is the fourth New York City officer killed in the line of duty in the last 11 months. Based on information on the website Officer Down Memorial Page, which tracks line-of-duty police deaths, that appears to be the most in any 12-month period since four officers were shot and killed between October 1996 and May 1997.

In December, New York officers Rafael Ramos and Wenjian Liu were shot and killed in their patrol car by a man who said he was avenging the killing of unarmed black men by police.

Information about Howard's criminal past came on the day Bratton had been expected to join dozens of high-ranking police officials from across the country in Washington, D.C., to announce their support for efforts to reduce prison populations.

"The perpetrator here was obviously a hardened, violent criminal who should not have been on the streets," Mayor Bill de Blasio said.

The mayor and New York State Governor Andrew Cuomo ordered flags to be flown at half-staff in honor of Holder.

Police said on Wednesday that Holder and other officers had responded to reports that several people were shooting at one another.

They said one of them was Howard, who fled and a few blocks away took a bicycle from a man at gunpoint.

Holder and his partner encountered Howard on the overpass, and Howard fired a single shot, striking Holder in the head, police said.

Holder's partner returned fire, and Howard was arrested a few blocks away with a gunshot wound in his leg, police said.

Holder was pronounced dead at Harlem Hospital Center at 10:22 p.m. Officers who had gathered outside the hospital saluted as his body was taken away in an ambulance.

Bratton said the four recent killings of NYPD officers were part of the "randomness" of violent crime, and added that they were the most he had seen in such a short period of time in his 45-year career.