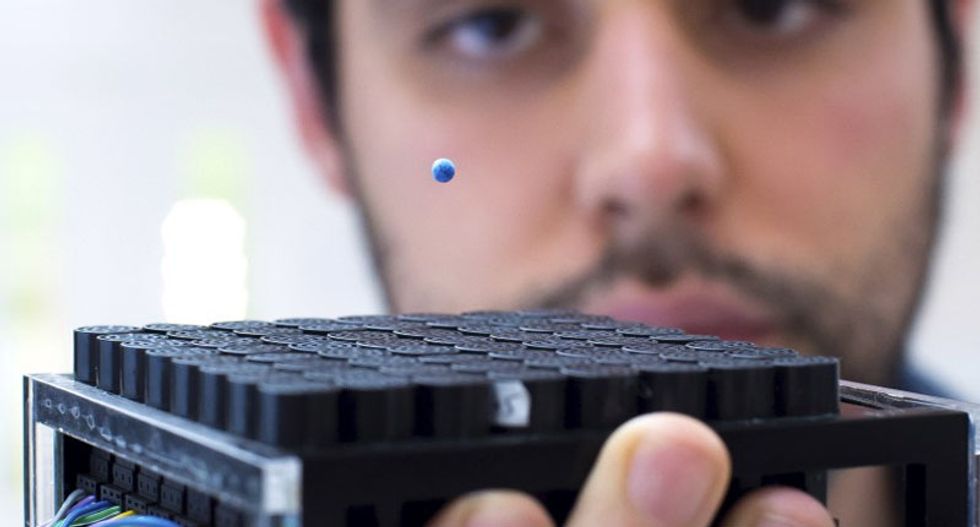 The tractor beam, a staple of science fiction including "Star Wars" and "Star Trek" that is employed to grab spaceships and other things remotely, is entering the realm of reality.

Researchers on Tuesday said they have developed a tractor beam that uses high-amplitude sound waves to levitate, move and rotate small objects without making contact with them. They envisioned medical and other applications for the device.

"As a mechanical wave, sound can exert significant forces on objects. Just remember the last time you were in a concert and your chest was vibrating with the music," said study lead author Asier Marzo of Britain's University of Bristol and Spain's Public University of Navarre.

Marzo said this sonic tractor beam has manipulated objects up to about one-seventh of an inch (4 mm) in diameter and can control the position and orientation of the levitated objects.

The tractor beam uses ultrasound at a frequency of 40 kilohertz. People can hear only below 20 kilohertz.

The researchers used sound waves from 64 miniature loudspeakers called transducers to create what they called "acoustic holograms" to control an object without touching it. These waves took the form of tweezers to lift an object, a vortex to hold a levitating object in place and a cage to surrounds an object and hold it in place.

"A simple wave will just push the particle in the direction of propagation. However, multiple waves will interfere with each other and create complex, acoustic 3D shapes that exert forces from all directions and keep the particle in place," Marzo said.

Marzo said the largest object moved using the device was a 4 mm bead made of a light plastic called polystyrene.

"With special high-power transducers it would be possible to levitate even steel balls," Marzo said.

"Sound cannot travel through the void of space but it can do it through water or human tissue. This potentially enables the manipulation of clots, kidney stones, drug capsules, microsurgical instruments or cells inside our body without any incision," Marzo said.

The research, which also involved researchers at Sussex University and a British company called Ultrahaptics, was published in the journal Nature Communications.