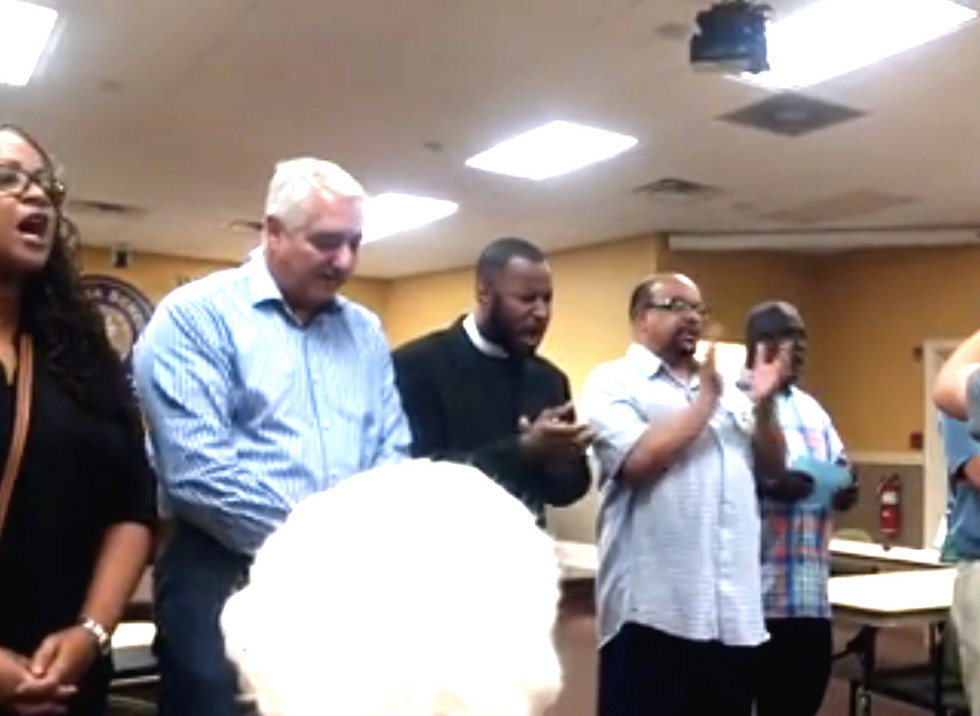 Image: Members of the clergy praying at a meeting of the Okaloosa, FL School Board (screen capture)

A school board meeting in Okaloosa County, Florida devolved into a noisy, chaotic mess Monday night when a group of clergy began loudly praying, clapping and shouting as the board voted on whether to allow Christian prayers in public schools.

Friendly Atheist blogger Hemant Mehta reported that the board voted 3 to 2 in favor of allowing teachers and administrators to lead students in Christian prayers at school functions.

The Okaloosa-Walton Freethinkers -- a secularist group -- posted a video of the noisy mayhem that erupted at the meeting when all of the clergy members began to loudly pray together, joined by some members of the public.

"This was just the beginning of the antics that took place prior to the Okaloosa School Board meeting this evening," wrote the Freethinkers on Facebook.

“I rise in support of the invocation at this meeting or any other meeting. I’m heartstruck at the thought that we have to fight to be able to pray. How in the world can we start our meetings and not invoke the name of God?” said Lewis Jennings.

“I have a 3-year-old. I raise her up on her knees," said parent April Jennings. "I don’t want her to be a part of a school system where God is not welcome. I can’t afford to home-school her, but I will go broke taking my time to teach her about Jesus.”

“Because of the problems we face in running the school board and all of the school system, you need to bring back God into your deliberations. You’re dealing with some tough problems in the schools, and you need God to help you," said Robert Brady of Ft. Walton.

Atheist David Suhor, however, pointed out that prayer in schools should therefore extend to all religious groups and not just Christians.

"We humanists believe you are making a huge mistake by injecting prayer into this meeting," Suhor said. "By introducing prayer, you abandon all sense of neutrality. As school leaders, you aren't following the same rules you impose in your schools. How are you going to deal with a Muslim or pagan who wants to lead a prayer? What are you going to do when a Satanist says a prayer?"

This was just the beginning of the antics that took place prior to the Okaloosa School Board meeting this evening.