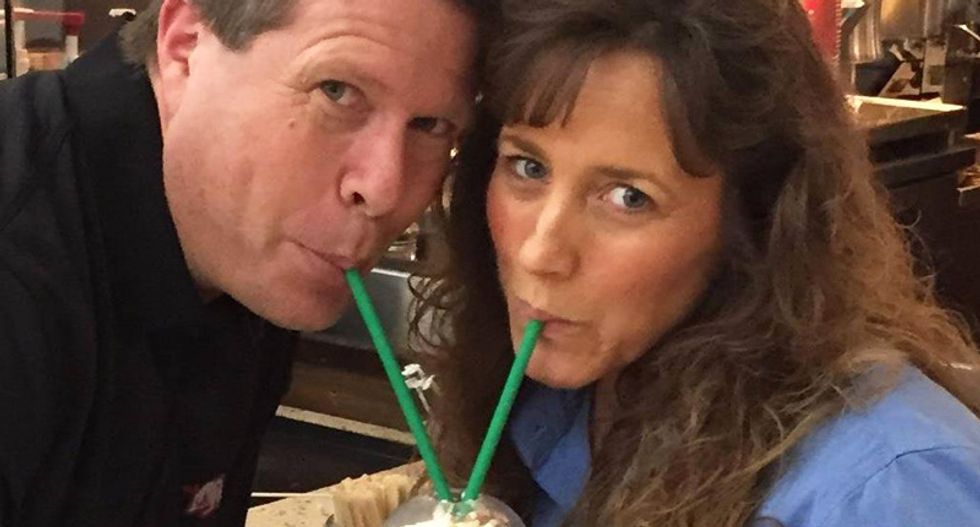 Mega-family patriarch, Jim Bob Duggar recently re-posted a whimsical note of advice to Christian fathers who wish to be spiritual leaders in their homes: Start protecting your family by removing books, magazines, television, or internet that have worldly or sensual content. Replace them with good things like wholesome music, biographies of great Christians, good old-fashioned family fun and games.

Jim Bob -- who believes that by Divine design, men are to be leaders while women were created to bear children and submit to their husbands’ God-ordained supremacy -- might seem to be the embodiment of modern Christian evangelical sexism, but in truth, Daddy Duggar is only a minor-league chauvinist when compared to these Quiverfull leaders whose “WTF!-Did-He-Really-Say-That?!!” blog commentaries are regularly quoted and debunked at No Longer Quivering, a website devoted to exposing the dangers of Christian fundamentalism:

“Husband of one, father of six,” Vaughn Ohlman, who advocates for early marriage via father-led “betrothal,” blogs at TrueLoveDoesn’tWait.com. The popular “True Love Waits” campaign, which is inspired by the contemporary Christian purity movement, is completely off base, according to Ohlman, who contends that “true love doesn’t wait, it marries.”

Von digs into the Good Book, as well as numerous lengthy quotes from ancient Christian patriarchs, in search of the truly-true biblical path to marriage, and what he’s discovered has resulted in the necessity of a FAQ page which addresses these actual readers’ objections:

Author of “Reforming Marriage,” “Federal Husband,” and “Future Men,” Doug Wilson is the senior minister at Christ Church in Moscow, Idaho who writes on a variety of topics at Blog & Mablog.

Here’s a small sample of Wilson’s views concerning the “biblical concepts of true authority and submission”:

A man penetrates, conquers, colonizes, plants. A woman receives, surrenders, accepts. This is of course offensive to all egalitarians … But we cannot make gravity disappear just because we dislike it, and in the same way we find that our banished authority and submission comes back to us in pathological forms. This is what lies behind sexual “bondage and submission games,” along with very common rape fantasies. Men dream of being rapists, and women find themselves wistfully reading novels in which someone ravishes the “soon to be made willing” heroine.

Never mind that Wilson sincerely believes Christian women are prettier than unbelieving “lumberjack dykes” … there’s so much more to dislike about this pastor than his infuriatingly misogynistic blog posts. Along with defending slave ownership, Wilson is being strongly criticized for his role in facilitating the marriage of a young woman to a confessed serial pedophile as well as aiding and abetting a child predator who groomed and sexually molested a 13-year-old daughter of a Christ Church member family.

Prophet, Priest, Provider, Protector - these are the “Four Ps” - the essential qualities of godly men, according to pastor, professor, author, conference speaker, and father of nine, Voddie Baucham. In his book, “What He Must Be If He Wants to Marry My Daughter,” Baucham laments: We don’t expect much from men, and for a long time, we’ve tried to convince our children that there are no differences between men and women. What that creates is passivity in men. Men don’t know if it’s okay to pull out a chair or open a door anymore, so what do they do? They stand there, and they don’t do anything. … We’ve failed to instruct, and we failed to stand firm in the face of opposition. The result of it is men who just really have been neutered in many ways.

Readers who are unfamiliar with the Stay At Home Daughters (SAHDs) movement will find Baucham’s distaste for educated, independent young women especially disturbing in this promotional clip for “The Return of the Daughters”:

Worse yet, in a YouTube video series on Biblical Womanhood (the videos have now been made private), Baucham stated that middle-aged men have a need for the attention of younger women, and God has anticipated and provided for this need by placing teenaged daughters in their homes.  When the daughters are not giving their fathers the attention they crave (either because they are going to college or are involved in a dating relationship), then it is no surprise to discover that daddy is having an affair with his secretary.

The sexist jerk who dishes out the most outrageous and infuriating marital advice on his website, Biblical Gender Roles, might very well be a troll. Solomon (not his real name) has caused quite a stir around the internet recently by suggesting that Christian wives must never refuse their husbands sex -- even if they are sick or in pain, that Christian husbands can still enjoy grudgingly given sex with their reluctant wives by simply not looking at their faces while they’re doing the deed, that husbands must make their wives fear being “shown the door” if they refuse sex, and that wives who continue to refuse need a “sexual intervention” in which the pastor and his wife show up unannounced to persuade the reluctant wife to perform her marital duty. Solomon also claims that biblically, there is no such thing as marital rape.

Whether Solomon is for real or, as has been suggested, merely a super creepy troll, his postings at Biblical Gender Roles are particularly onerous precisely because he blatantly states what many evangelicals believe but are too polite (too devious?) to put into writing. Take for example, this recent post on how doing LESS for your wife can make your marriage better:

The first thing that you should do is apologizing (sic) for not leading your home as you should have. Now that you are taking on the leadership responsibility of your home there are going to be some changes. Go through those changes with her and be clear what you believe your Biblical duties are as husband and father and what her Biblical duties are as a wife and mother.

Or how ‘bout this gem on how to enjoy sex with your reluctantly-consenting wife?

"In Greek mythology there was a monster woman named Medusa. She was a cursed and hideous creature and if men looked upon her face they were turned to stone.

"I know you love your wife, most men love their wives. But sin is ugly. Your beautiful bride’s face becomes ugly during this sinful time that she is grudgingly giving you sex as she grimaces wanting you to “just hurry up and get it over with”.

"So like the men who could not look at Medusa’s face otherwise they would be killed, realize that if you look on your wife’s face when she is displaying a sinful attitude toward sex it will kill your sexual pleasure and may actually make it much more difficult for you to achieve the physical connection and release that you need."

Don't look at her face because seeing how she's not really into it could be a boner killer. Jeezus effing Christ.

Can Women Be Misogynists?

If so, here are some female “honorable mentions” to add to this list of anti-feminist Quiverfull Christian leaders:

“Editress” of Above Rubies, a magazine to encourage women in their biblical roles as wives and mothers and author of “Be Fruitful and Multiply: What the Bible Says About Having Children,” Nancy Campbell inspires Christian women to stay at home, submit to their husbands, and have lots and lots of babies.

Unless we have been successfully indoctrinated by humanist and feminist dogma, it is inherent within us to love being at home. God created the first home, the Garden of Eden, to be ready for Eve when He created her. He placed her in her home, in the environment He intended for her destiny. The Hebrew for Eden means “delight.” We should delight to work in our garden and our home. It is our sanctuary to raise our children in this dark world.

Wait till you hear about Debi Pearl, wife of patriarch extraordinaire, Michael Pearl whose biblical parenting manual, “To Train Up a Child” advocates whipping “rebellious” babies with ¼ inch plumbing supply tubing which has resulted in Christian parents literally beating their children to death.

God made you to be a help meet to your husband so you can bolster him, making him more productive and efficient at whatever he chooses to do. You are not on the board of directors with an equal vote. You have no authority to set the agenda. But if he can trust you, he will make you his closest adviser, his confidante, his press secretary, his head of state, his vice-president, his ambassador, his public relations expert, maybe even his speech writer -- all at his discretion.

Nancy Campbell and Debi Pearl are by no means the only women exhorting Christian women to embrace their God-ordained roles as submissive wives and prolific mothers. Check out Ladies Against Feminism, Generation Cedar, and Noble Womanhood, just to name a few.

I could go on … because, despite the perception that Jim Bob and Michelle Duggar’s version of “biblical family values” is an anomalous fringe of Christian evangelicalism, in reality, conservative Christianity IS anti-feminist, patriarchal, and misogynistic to the core. Dysfunction and abuse are inherent to fundamentalist Christianity.

Take a peek at the links referenced above -- browse the sites and be appalled. When you’ve seen enough and you’re ready to dismiss these patriarchs as extremist kooks, keep in mind that Ohlman, Wilson, Baucham, et. al. are not actually espousing any new teachings which are not regularly preached and practiced in “normal” Christian congregations for ages past … and still today. Focus on the Family, Family Life Today, Desiring God, Revive Our Hearts,… in fact, the majority of evangelical Christian para-church ministries consistently and persistently push “biblical family values,” i.e., the headship of husbands and submission of wives.