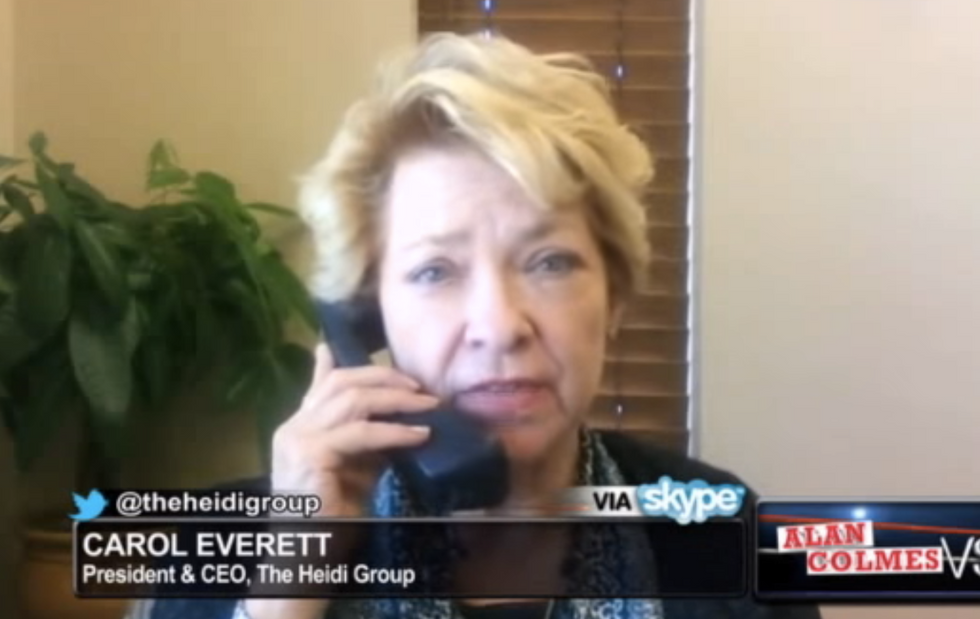 "If you look on the Teen Wire or some of the other sites that Planned Parenthood has, it's very interesting to see how they're encouraging children, young people to experiment with all sorts of, actually, bestiality, even," Everett said.

"Look online at the Planned Parenthood website for teenagers," Everett said. "There it is in black and white and color, not what I'm saying, there it is."

Colmes asked if Everett could supply the exact web address so he could see for himself.

"Well, it's online," she pressed, saying that she will have to give Colmes the exact URL later.

"And Planned Parenthood is behind this?" Colmes asked.

"All sorts of abortion providers are behind it. Planned Parenthood and others," said Everett. "I am saying that they have a website that actually encourages sex with animals."

Raw Story was unable to find any mention of bestiality or sex with animals on the main Planned Parenthood website or its pages for teens.

When asked to provide evidence, Everett sent Colmes a link to anti-abortion extremists the American Life League's list of "Planned Parenthood quotes," one of which contains an excerpt from a 1981 study of male sexuality by Wardell Pomeroy, MD that said:

I have known cases of farm boys who have had a loving sexual relationship with an animal and who felt good about their behavior until they got to college, where they learned for the first time that what they had done was 'abnormal.' Then they were upset.

Pomeroy was a sex researcher who worked with Alfred Kinsey, but it remains unclear how this relates to anything produced by Planned Parenthood or under that organization's auspices.

Everett -- a former director of four Texas clinics that included abortion among their services -- says that she was pressured into having an abortion by her husband and physician in 1973. After the procedure, she says that her life fell apart. She had an affair and began to drink excessively.

Now she is a fervent campaigner against women's right to choose, president and CEO of the Heidi Group, a Texas-based group dedicated to blocking access to abortion services and pressuring women not to terminate their pregnancies and "make positive, life-affirming choices."