British police still shun guns despite Paris attacks: 'We are an unarmed force -- we're proud of that' 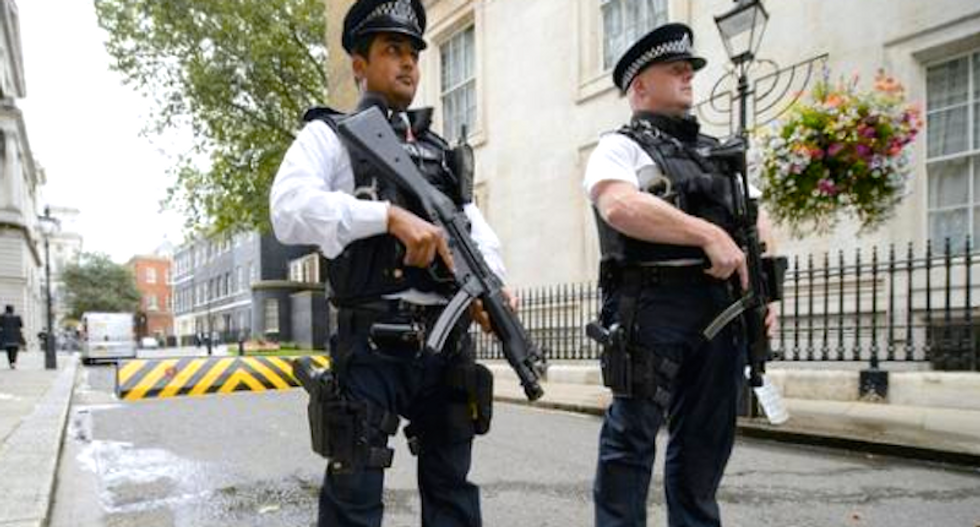 More armed police are to be deployed in London after the Paris attacks, but the move is unlikely to herald a shift toward providing weapons to most officers (AFP)

More armed police are to be deployed in London after the Paris attacks, but the move is unlikely to herald a shift toward providing weapons to most officers in the largely unarmed British force, experts said.

Britain is proud of being one of few countries where police usually do not carry guns, and the sight of heavily armed counter-terrorism police officers in recent days is a highly unusual one for many people.

While the image abroad of "bobbies on the beat" wearing tall hats and carrying little more than a truncheon and handcuffs is outdated, currently only 2,000 of the capital's 32,000 officers are armed.

However, coordinated gun and bomb attacks in Paris last Friday, as well as a review of British police budgets next week, have prompted a partial rethink.

"There will be more firearms officers available every day on the streets," London's Metropolitan Police Commissioner Bernard Hogan-Howe told LBC radio this week.

"What we don't want to do is to knee-jerk towards a new type of policing where everybody's armed," he added.

British police are proud of their history of policing "by consent" -- the idea that police serve the people, not the state.

They say the principle would be tarnished by the sight of too many armed police officers.

Also, the kind of crimes that would necessitate an armed response are relatively low in Britain, and too many armed police could spur more criminals into buying guns, experts say.

Other countries that have mostly unarmed police forces include Ireland, Norway and New Zealand.

Armed police are usually only deployed outside sensitive government buildings.

Since Friday, officers wearing body armor have been seen at football matches and transport hubs.

"I think it is a matter of reassurance, and I don't think they will overdo it. It will be where necessary," said Margaret Gilmore, policing specialist at London's Royal United Services Institute think tank.

Still, police numbers have fallen sharply in recent years as part of a government-wide austerity drive, leading to fears London would struggle to cope with the kind of attacks that struck France on Friday.

"Once upon a time, you could get firearms support to somebody within 10 to 15 minutes," said a retired senior British police officer who declined to be named.

"There are now occasions throughout the country where the possibility of getting somebody there within 50 minutes is more likely."

Suicide bombers and gunmen targeted multiple locations in Paris in the coordinated operation claimed by the Islamic State jihadist group.

A balance must be struck in which readiness for Paris-style attacks is increased, while maintaining the British force's largely unarmed posture, experts said.

Restricting weapons to specially trained units would help achieve that.

"There's no way this is about someone coming onto duty and being given a firearm. These are very highly trained people who choose to be in a specialist firearms unit," Gilmore said.

"Given the fact that the Paris attacks have shown that ISIS have not only the ambition but the capability of carrying out attacks on the streets of Europe, we have to adapt to that heightened terrorist threat," she said, using an acronym for the Islamic State.