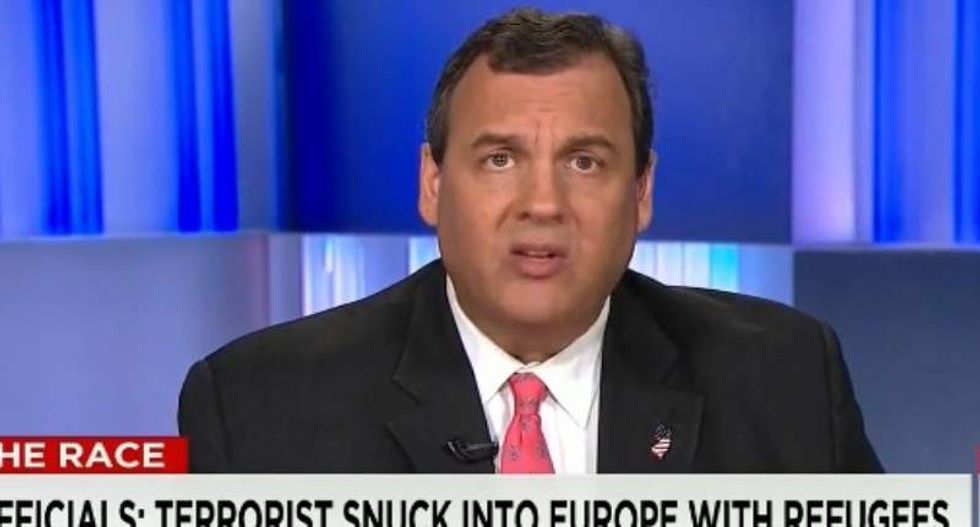 New Jersey Gov. Chris Christie (R) seemingly refused to accept reports that the perpetrators of last week's terrorist attacks in Paris were not Syrian refugees during an interview with CNN on Wednesday.

"I understand that this anti-refugee position is certainly a popular thing to do," host Jake Tapper told him. "But most of the terrorists here in France appear to be French and Belgian citizens. I know that one of them got into the country embedding himself with refugees, but most of them did not. Most of them were citizens here in Europe and I don't hear you or any of your fellow presidential candidates calling for European citizens to be banned from entering the United States."

In reality, European Union officials have "figured out" that the attackers were not refugees.

Christie then acknowledged Tapper's point, but added, "For you to make the blanket conclusion from that that most of the terrorists are folks who are from inside Europe just doesn't wash with me. The fact is, we need to protect American homeland security first and foremost, and admitting people that the FBI director says cannot be vetted, I don't care where they're from."

The governor was criticized -- though not by name -- by President Barack Obama earlier in the day during a speech in the Philippines. The president mocked Christies and his fellow GOP candidates, saying, "At first, they were too scared of the press being too tough on them in the debates. Now they are scared of three-year-old orphans."

Christie fired back during his talk with Tapper, accusing Obama of creating the chaos that is forcing the refugees to flee their country.

"He allowed the situation in Syria to happen," Christie said. "He hasn't set up a no-fly zone that could create a safe haven for these refugees to live safely in their own country, rather than having to scatter all across the world. And he's the one who's casting aspersions? It's a joke. And he's a joke on this issue."

Watch footage from the interview, as posted online on Wednesday, below.