Christian school: Girls must cover legs with tights to prevent rape or be punished with 'isolation' 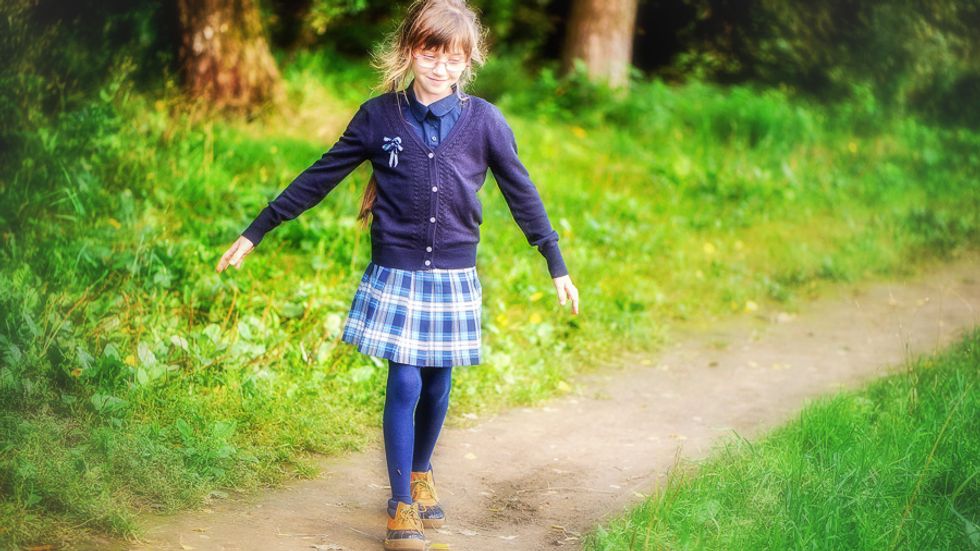 School girl in navy blue uniform has fun in the autumn forest after school (Shutterstock.com)

A new policy at a British Christian school is requiring girls to cover their legs with "opaque tights" and long skirts as a safety measure against sexual assault.

The Hartlepool Mail reported that parents of students at St. Hild’s Church of England School had received a letter informing them of the new policy.

The letter says that “in the interest of modesty and to ensure your child is properly safeguarded on their way to and from school, we ask that black tights be worn with skirts at all times”.

Carol McEnaney told the paper that her 14-year-old daughter Hannah was handed a pair of tights when she showed up at the school wearing a skirt with socks.

“The school said, though, that if she didn’t wear tights, she would be put in isolation or sent home," McEnaney explained. “I want to get my point across that girls should have the right to choose."

“My daughter does not dress inappropriately," the mother added. "She’s perfectly presentable, and there shouldn’t be a problem as the skirt isn’t short. It’s about knee-height."

Sam Smethers of the Fawcett Society, a charity with the mission of ensuring equal rights for women, argued that the dress code was teaching the wrong lessons to girls.

“Girls and young women are being asked to change their behaviour and modify the way they dress and here is yet another example. That’s just not acceptable in 2015," Smethers observed. “Modesty and safeguarding don’t come into it. What they should be focussing on is opening up a world of opportunity to their young women, not controlling what they wear.”

The school's letter to parents describes the dress code change as a "interim" policy, and says that parents will be given a chance to provide feedback at a later date.

“We would like to review our school uniform policy, and will be inviting you to take part in a full consultation in due course," the letter to parents notes. “However, we have a particular concern at the moment regarding the length of skirts worn by some of our female students."

“In the interest of modesty and to ensure your child is properly safeguarded on their way to and from school, we ask that black tights be worn with skirts at all times, effective from Monday, November 9, 2015," the letter continues. "These should be opaque tights, no less than 40 denier. Alternatively, your child may wish to wear black school trousers, as stipulated in the uniform section of the school website."