Cop attacks Calif. Deputy Attorney General for 'speaking loudly' in court -- and gets away with it 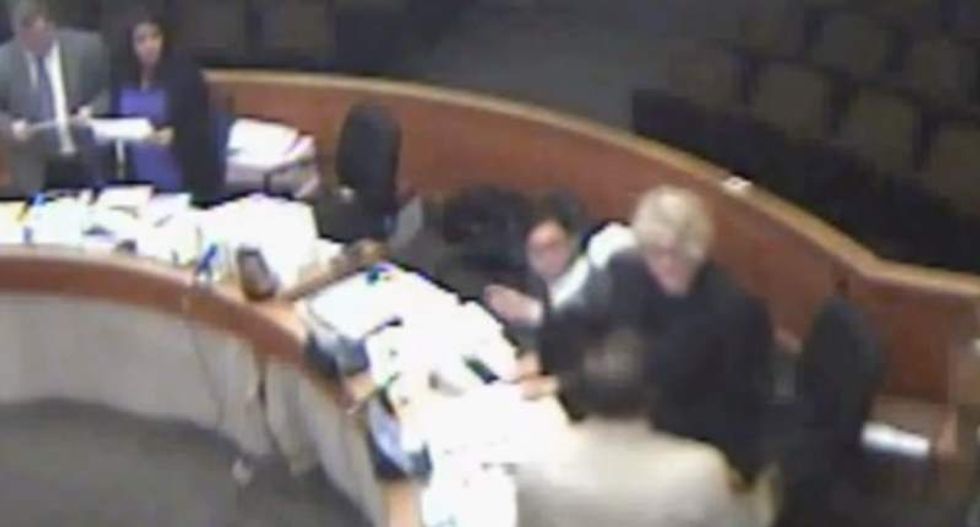 Surveillance video inside a California courtroom captured a bailiff assaulting Deputy Attorney General Jennie Mariah Kelly during a recess because she was “acting in an unprofessional manner.” Although Kelly was arrested for resisting an officer, the District Attorney’s office has not filed charges against the deputy attorney general or the bailiff.

While arguing against a wrongful termination lawsuit on October 20, Kelly reportedly became angry when the plaintiff’s attorney, Timothy Magill, asked a state witness whether she had met with Kelly prior to her testimony in order to cast doubt on her credibility. After Superior Court Judge Barry LaBarbera called for a morning recess, the judge and jury filed out of the courtroom as Kelly began berating Magill for his tactics.

In the beginning of the video, Kelly can be seen shouting at Magill across the mostly empty courtroom. Instead of attempting to defuse the situation, a bailiff approaches the deputy attorney general and appears to ask her to leave before grabbing Kelly’s wrists. As Kelly attempts to pull her hands back, the bailiff tackles her to the ground slamming her head against a metal rail.

Before calling for backup, the bailiff continues to hold down Kelly while pointing a finger and seeming to threaten another female attorney. At least six deputies immediately can be seen on the surveillance video restraining the nonviolent deputy attorney general while placing her in handcuffs. A military veteran with 21 years of legal experience, Kelly was escorted out of the courtroom and arrested for resisting a police officer.

According to the San Luis Obispo County Sheriff’s Office, the bailiff was legally justified in attacking Kelly because the deputy attorney general was “speaking loudly” to Magill and “acting in an unprofessional manner.” Instead of attempting to calm Kelly down following the controversial cross-examination, the bailiff immediately resorted to violence.

Although the San Luis Obispo County District Attorney’s Office has not filed criminal charges against Kelly, they have also neglected to charge the bailiff with use of excessive force. Even when government employees are caught on video physically assaulting each other, apparently they still continue to cover their asses.

Watch footage of the incident, as posted online, below.

This story first appeared on The Free Thought Project