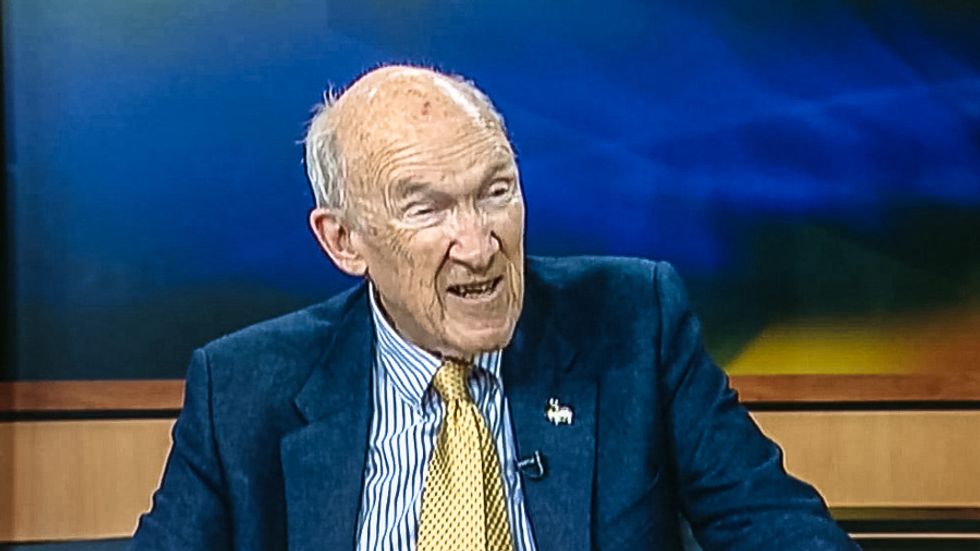 Former U.S. Sen. Alan Simpson (R-WY) called out wealthy companies and conservative leaders as hypocrites over the weekend for refusing to support a $15 minimum wage even though corporations showed billions in profits each year.

Speaking to KULR in an interview that aired on Sunday, Simpson said that he had learned from visiting college campuses that young Americans were not interested in voting on traditional Republican social issues like abortion and same-sex marriage.

"They're very serious people and they don't care about the social issues," he noted. "Gay-lesbian issues are not even on their screen, and they're very accepting of others, which is great, I think."

According to Simpson, young people saw abortion as a "deeply intimate and personal decision."

"I don't think men legislators should even vote on it," the former Republican senator revealed.

But Simpson worried that young people were being taught to be "consumers" instead of saving for the future.

"I think the class warfare thing is going to get worse and worse, the income inequality worse and worse," Simpson continued. "This business of the minimum wage, 'Oh, you can't afford $15.' Well, then don't publish your quarterly reports saying you made a billion and a half. Give me a break."

But what really burned Simpson was the "hypocrisy."

"Hypocrisy is the original sin," he declared. "It's the guy who's checking your moral values, like to ask for Jesus, you know -- while they're diddling their secretary. That's not my idea of family values."

"Either you're who you are or you're not.... people just lead a fake life and try to give you advice."

Watch the video below from KULR's Sunday Roundtable with Greg & Chris, broadcast Nov. 8, 2015.