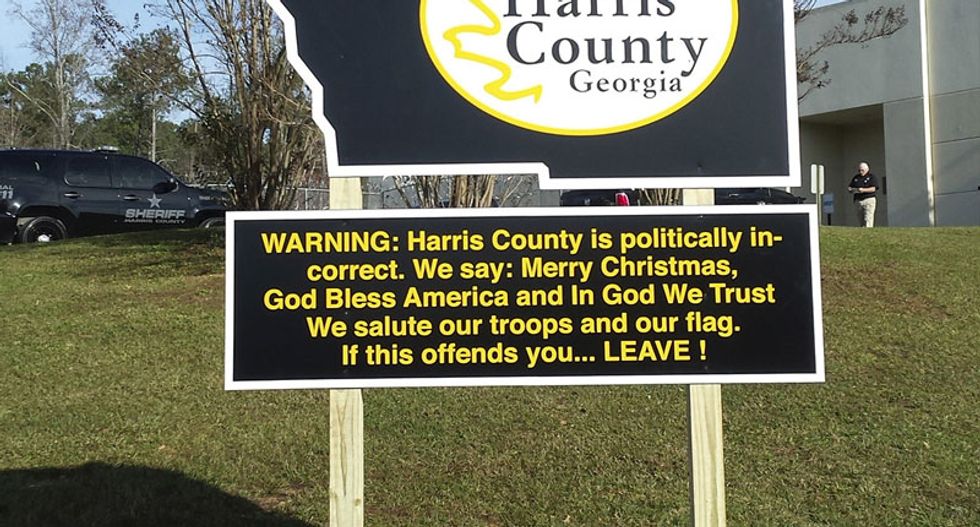 A Georgia sheriff has staked out his ground in the U.S. culture wars by posting a large sign cautioning visitors that his community is proud to be "politically incorrect."

"WARNING: Harris County is politically incorrect," reads the sign posted on Tuesday under a welcome banner and the official seal of the county, located in central Georgia near the border with Alabama.

"We say: Merry Christmas, God Bless America and In God We Trust. We salute our troops and our flag," says the sign placed in front of the Harris County Sheriff's Office. "If this offends you ... LEAVE!"

Sheriff Mike Jolley said the concept was suggested by his staff members, who "saw the verbiage on the Internet somewhere."

The elected sheriff, a U.S. Army retiree who has been in the position for 23 years, personally paid for the $553 sign, which includes an image of the county's official seal.

"I believe it's time for the silent majority to speak their minds," Jolley told Reuters on Wednesday in a phone interview.

So far the response has been "overwhelmingly, humbling positive," said Jolley, noting that his office has received phone calls of support from as far away as Hawaii. He has also heard from critics.

The sign has gained the attention of the American Civil Liberties Union of Georgia, which is exploring the situation.

"It reminds me of the 'don't get caught in this town after sundown' signs that used to go up in segregated America," she said.

Jolley said he expects a lawsuit challenging the sign as a violation of the U.S. Constitution's separation of church and state provisions.

"If a judge tells me to take it down, I'll move it to private property," he said. "I'm not here to cost the county any money."