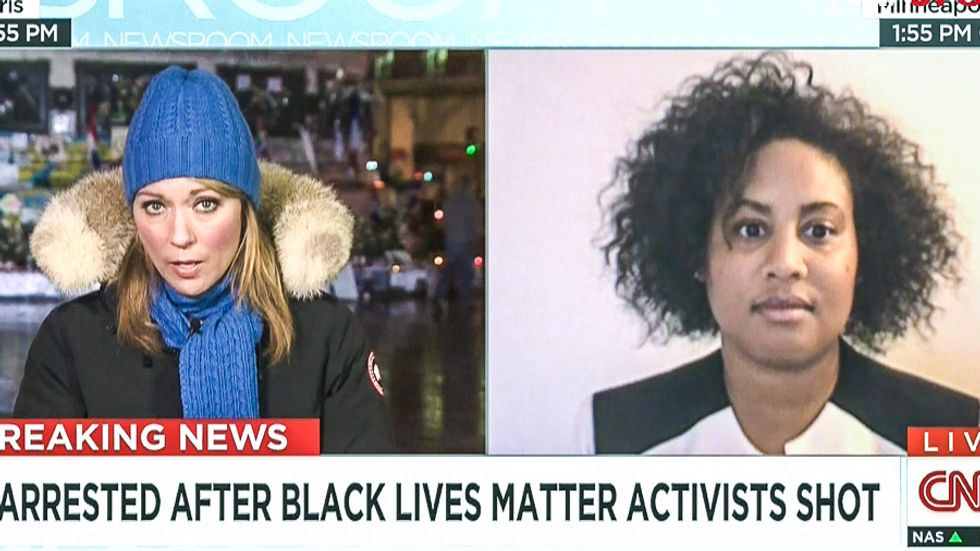 Raeisha Williams, communications chair of the Minneapolis NAACP, told CNN that members of law enforcement were "behind" the Monday night shooting of Black Lives Matter protesters.

During an interview on Tuesday, CNN host Brooke Baldwin asked Williams to react to breaking news that two men had been arrested in connection to shootings that injured at least five people who were protesting the killing of Jamar Clark.

"We're hearing two [arrests] at this time," Williams explained. "But we don't necessarily trust that. We know that the police department is behind this, this is our personal belief after receiving witness accounts."

"Wait, wait, wait," Baldwin interrupted. "You said you believe the police department is behind what?"

Baldwin, who was broadcasting from Paris, noted that Williams had made "serious allegations" on national television.

"And we are standing behind it, we do not back down from these allegations," Williams insisted.

"Where is your evidence that they were involved in the shooting?" Baldwin pressed.

According to Williams, police were "lurking" near the shooting and then refused to provide help to the injured protesters.

"This is what you've been wanting," she recalled one of the officers saying.

"It took 15 minutes for the police to even arrive and shortly after that, they began to Mace the crowd," Williams said. "So if you're not part of the problem, if this is not something you're trying to cover up, why would you not attend to victims who paid for your salaries?"

Williams said that her group had "video evidence of an undercover cop getting into an unmarked car."

"We believe -- and we stand behind our belief -- that the Minneapolis Police Department is not protecting us and therefore they stand with racist white supremacists who want to destroy a peaceful movement," she concluded.