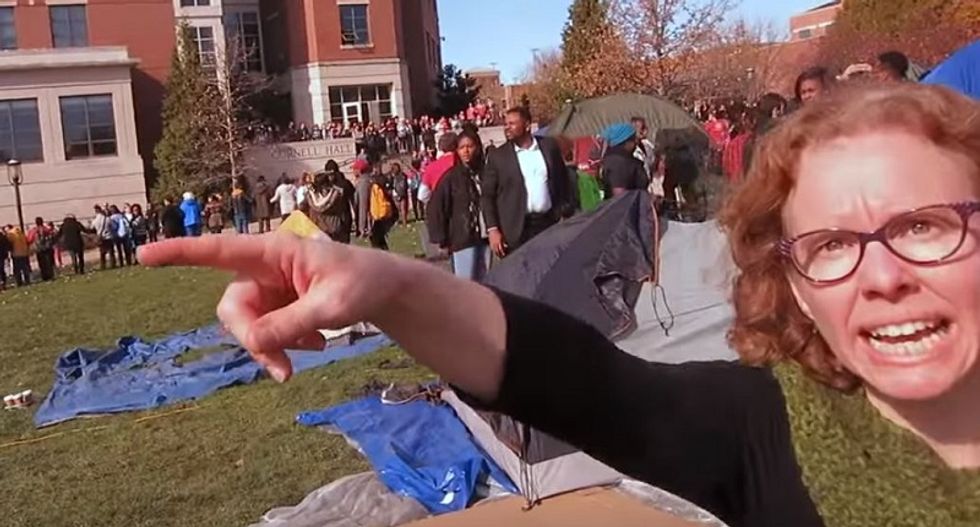 Officials at the Missouri School of Journalism are deciding the fate of an instructor who was filmed in a heated confrontation with a photojournalist who was snapping photos of a protest at the university, the Missourian reports.

Melissa Click could be barred from the journalism department after a confrontation with freelancer Tim Tai and another cameraman Mark Schierbecker, who posted it to YouTube.

Schierbecker approaches Click, and says, "I'm media, can I talk to you?"

When he says he does not need to leave, she tries to grab his camera. She then hollers, "Hey, who wants to help me get this reporter out of here? I need some muscle over here!"

Earlier, another woman could be seen pushing Tai, who could be heard telling demonstrators that he had the First Amendment right to cover the protest. The First Amendment guarantees freedom of the press and allows reporters to cover news without censorship.

The Missouri School of Journalism clarified in a statement that Click is not a professor there.

"Also, for clarification, Assistant Professor Melissa Click, featured in several videos confronting journalists, is not a faculty member in the Missouri School of Journalism," the statement reads. "She is a member of the MU Department of Communication in the College of Arts and Science. In that capacity she holds a courtesy appointment with the School of Journalism. Journalism School faculty members are taking immediate action to review that appointment."

Revoking Click's courtesy appointment only prevents her from teaching journalism classes. According to the Federalist, Click's current research involves, "50 Shades of Grey readers, the impact of social media in fans’ relationship with Lady Gaga, masculinity and male fans, messages about class and food in reality television programming, and messages about work in children’s television programs."

Watch the confrontation, uploaded to YouTube, by Mark Schierbecker, here: