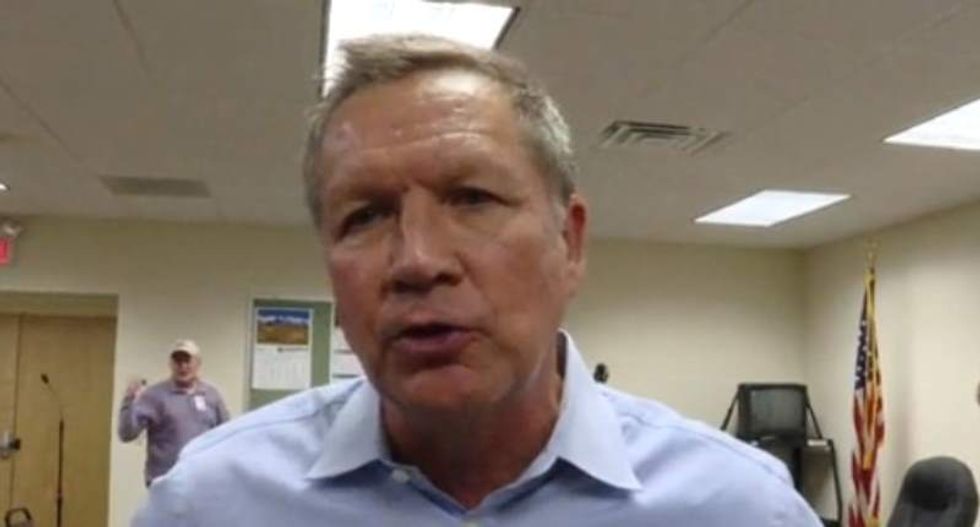 By Molly Redden, The Guardian

Lawmakers seeking to defund the women’s healthcare organization in wake of series of sting videos are taking aim at $1.3 million used for STI and HIV tests

But in an apparent first, its lawmakers are not going after the family planning funds that legislators in many other states have targeted. Instead, Ohio abortion foes are taking aim at $1.3 million Planned Parenthood uses to conduct STI and HIV tests, and infant mortality reduction programs to supplement the state’s troubled healthcare system.

In defense of the cuts, senators disseminated list of alternative providers that include dentist offices, school nurses and a food bank as options for Ohio women.

The defunding effort comes in the aftermath of heavily edited sting videos that purport to show Planned Parenthood employees selling fetal tissue, a violation of federal law. Planned Parenthood denies the accusations, and investigations in more than a dozen states have concluded without finding any evidence of wrongdoing.

But that option was foreclosed in Ohio: the state already passed such a law in 2013.

The house voted to block those grants from going to Planned Parenthood on Wednesday. The Senate voted on a similar measure in October. A version of the bill will reach the desk of Republican governor John Kasich any day now, and he is widely expected to sign.

What the consequences of the cuts will be is a matter of dueling realities.

In 2015, the money Ohio is proposing to strip from Planned Parenthood paid for 47,137 sexually transmitted infection tests, 3,620 HIV tests, and Violence Against Women Act education programs, and supported 2,780 patients in the state’s infant mortality reduction program. In two counties with high poverty – Mahoning and Trumbull – Planned Parenthood has run the state’s infant mortality reduction program for two decades. To health advocates, the results of taking those resources away could be catastrophic.

“If Planned Parenthood goes away as a provider, there will be a void of services in our community, and we don’t have the capacity to fill that void,” said Kelli Arthur Hykes, the health policy director for the department of health in Columbus. “Anything that changes the balance of what’s available right now, we’re afraid it could be disastrous for our community.”

Even with funds reallocated from Planned Parenthood, Hykes said, Columbus providers could ramp up their capacity only 10% in the next two to three years. Space, time, and properly trained staff are in too short a supply. At the same time, the neediest women in her city, Ohio’s largest, wait up to six weeks for an appointment with an OB-GYN. The state overall ranks 48th in infant mortality rates. And it is the deadliest state in the country for African American infants.

Reducing infant mortality is the centerpiece of many multi-million-dollar state health initiatives, Hykes pointed out. “Every single thing that happens to women before, during, and after her pregnancy is key to reducing infant deaths,” Hykes added. “Any effort that undermines that is detrimental to our efforts – not only counterproductive, but dangerous.”

Governor Kasich, however, who is running for the Republican presidential nomination, is untroubled. “I’m not gonna jeopardize anybody’s health, but Planned Parenthood ought to learn that what they were doing was not acceptable,” he said at a recent campaign event in Hopkinton, New Hampshire. Asked if he was concerned the cuts would fuel an existing shortage of health providers, he said: “We don’t think that’s a problem, because there are many different entities that can handle this, from our hospitals throughout the state of Ohio to our federal clinics.”

Several of those providers confirmed that they do not provide STI testing or any other reproductive health services. A spokeswoman for the Freestore Foodbank in Cincinnati, which appears on the list, said the group doesn’t provide any medical services at all, although it helps people enroll in healthcare. “We’re just a drug and alcohol treatment center,” said a representative for the Center for Chemical Addictions, also on the list.

The website for the Mayores Senior Center, another entry, is silent on reproductive health services but notes that the center offers a nutritional health program, arts and crafts, casino trips, and bingo. “Crest Smile Shoppe,” reads the website for another location on the list, “provides the following health services: dental services.”

Ohio Right to Life has its own map of 280 alternative providers it claims can easily take the place of Planned Parenthood. Michael Gonidakis, the group’s president, claims the list is devoid of dentists or senior centers.

“We’ve done out homework,” Gonidakis said, indicating he reached out to many of the locations on his organization’s map. “Not one community health center has told us they can’t take on any more patients or clients.” He noted that many of them would receive additional funding once it was diverted from Planned Parenthood.

In the interview, Gonidakis agreed to share the list. “There’s no hiding the ball here,” he said. He later retracted the offer in an email, writing, “We have an internal database with hundreds and hundreds and hundreds of alternatives in Ohio. Unfortunately we are not distributing that because of all the harassment Planned Parenthood does to each of these clinics.”

When pressed, Gonidakis offered no details on how many of the 280 health centers offer the same services that Planned Parenthood provides using the federal funds. A spokesman for Kasich’s office did not reply to a request asking how his office determined that there was sufficient capacity.

Copeland, of NARAL, thinks the state doesn’t know the answer. “They have not done the due diligence to see if other health care providers in the community would be able to take on the capacity,” she said.” There’s been no study done. They just threw out this list.”

Some providers have told Ohio news outlets that they could absorb Planned Parenthood’s patients in theory – but that they couldn’t be certain of reaching those women.

“Having worked with vulnerable, hard to reach populations, specifically immigrants and refugees who are often limited English proficient and face cultural barriers, I think it’s extremely critical that we do not close any doors in terms of access,” Michael Byun, the head of local health provider Asian Services in Action, told the Cleveland Plain Dealer.

Kight, the CEO of Planned Parenthood of Greater Ohio, has said that her group will continue to offer the same services if it loses the funding. But the cuts would be “a big blow,” she said. Planned Parenthood sees more than 70,000 Ohio patients a year at 28 locations, three of which provide abortions.

Reproductive rights advocates say those funds have been critical for Ohio. The Guttmacher Institute, a thinktank supportive of abortion rights, identified seven counties in the state where Planned Parenthood is the only safety-net provider of contraception services. In an additional 12 counties, Planned Parenthood serves more than half of the women who rely on government support for contraception. (The numbers are from 2010, the latest year for which Guttmacher has data available.)

Abortion foes, though, maintain these fears are overblown.

“There’s no tsunami of patients coming,” Gonidakis said. “Whether you’re talking about one or ten or one thousand women, the options in Ohio are plenty."