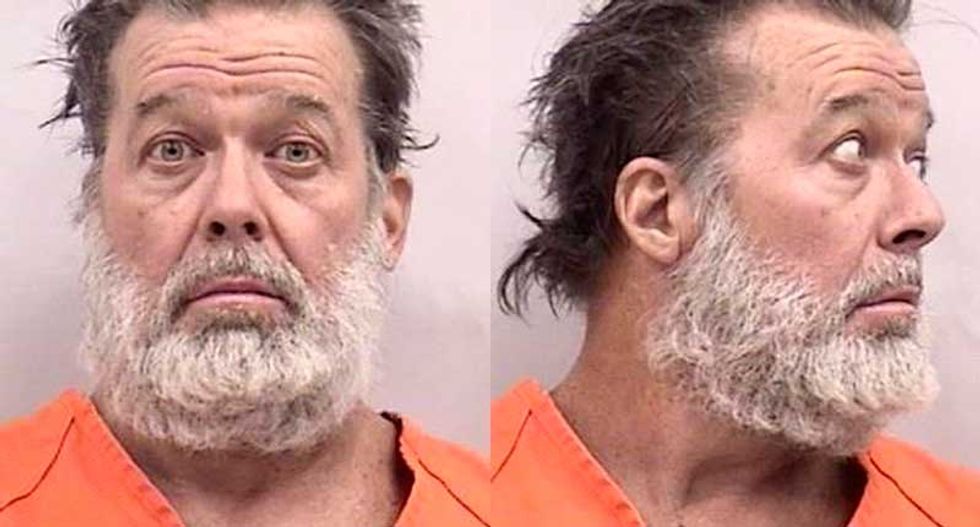 Three people are dead and several others are injured after a crazed man opened fire near a Planned Parenthood in Colorado Springs. Among the victims of Robert Lewis Dear's act of terror was police officer Garrett Swasey and two unidentified civilians.

When news of the six-hour standoff broke, media outlets and authorities were careful to not speculate on a motive until an investigation revealed why Dear would feel the need to murder innocent people. However, soon after the shooting, Dear made remarks about his anti-abortion leanings, and authorities still refuse to accept that his motive was clearly to terrorize Planned Parenthood due to his objection to reproductive rights.

CNN's coverage perfectly demonstrates how authorities are extremely careful against speculating when it comes to a white murder suspect:

"...the suspect accused of carrying out the shooting spree made remarks about "baby parts" to investigators after his surrender, a law enforcement official told CNN. Dear, 57, told them he has anti-abortion and anti-government views, but that doesn't mean those opinions were his motive for allegedly shooting up the Colorado Springs clinic on Friday, the official said. It's too early to tell, as investigators are still processing evidence."

Speculating on a motive, whether the shooter is white, black, or Muslim, is always unacceptable in responsible journalism or policing, which is why I refused to share my opinion on the shooting until I was certain that Planned Parenthood was the target.

At this point, it's unclear what more Dear needs to say or do to make his motive clearer. He's a deranged lunatic who thinks Planned Parenthood is profiting off of "baby parts" because another group of deranged lunatics released fraudulent and highly edited videos to make it seem like these clinics are doing something illegal. If we keep beating around the bush, these acts of domestic terror will continue.

After the Center for Medical Progress released its defamatory and deceptive series of edited videos accusing Planned Parenthood of selling fetal tissue for profit, at least three of the organization's clinics have been vandalized. Domestic terrorists like Dear clearly have no grasp of irony, because in their quest to "protect life" they brutally murder innocent people. It's also important to finally accept the fact that these are not isolated incidents that develop out of thin air.

As the National Abortion Federation notes, since 1977 there have been 8 murders, 17 attempted murders, 42 bombings and 186 arsons and thousands of other incidents, including vandalism. The real numbers are likely to be higher, and the NAF has made sure to only include incidents that were reported to law enforcement agencies. They rightly haven't included cases that were ruled inconclusive.

After the Colorado Springs shooting, President Obama made the same predictable lukewarm statements that the media reported as bold.

"This is not normal. We can't let it become normal," Obama said, not realizing that these shooting are the new normal. "If we truly care about this -- if we're going to offer up our thoughts and prayers again, for God knows how many times, with a truly clean conscience -- then we have to do something about the easy accessibility of weapons of war on our streets to people who have no business wielding them. Period. Enough is enough."

And so we continue on with the same old routine in case after case of domestic terrorism. Rightwing organizations like the Center for Medical Progress and conservative presidential candidates like Carly Fiorina lie about Planned Parenthood, a right-winger opens fire at a clinic, the President offers up the same tough-guy rhetoric on gun control, conservatives act like this is an isolated incident, and at the end of it all nothing gets solved.

There needs to be real criminal consequences for organizations that deceive people to the point where they incite violence against abortion clinics. Domestic terrorism impacts Americans more than Islamic terrorism, yet nothing is being done about it. Last February, the Department of Homeland Security released a report warning about the threat of domestic rightwing terrorism, but the media and the government continued to shift its focus to Islamic terrorism abroad.

According to Democracy Now, despite the intense focus by the Obama administration on Muslim communities, non-Muslims have carried out more than 19 terrorist attacks since September 11, 2001, while Muslims have been responsible for seven. The number reported by Democracy Now are from last June, and don't even include the more recent cases of domestic terror.

Back in 2011, the DHS dismantled its unit that focused on rightwing terrorism because conservatives vilified the department for pointing a finger to real threats in the U.S. When you put all the puzzle pieces together, it's not a surprise that horrific shootings like the one in Colorado Springs happen so often. The U.S. doesn't really take these cases seriously. After all, we need to focus all our attention on despising movements like Black Lives Matter and demonizing Muslims. Apparently there's no time to protect lives from genuine threats in the country.