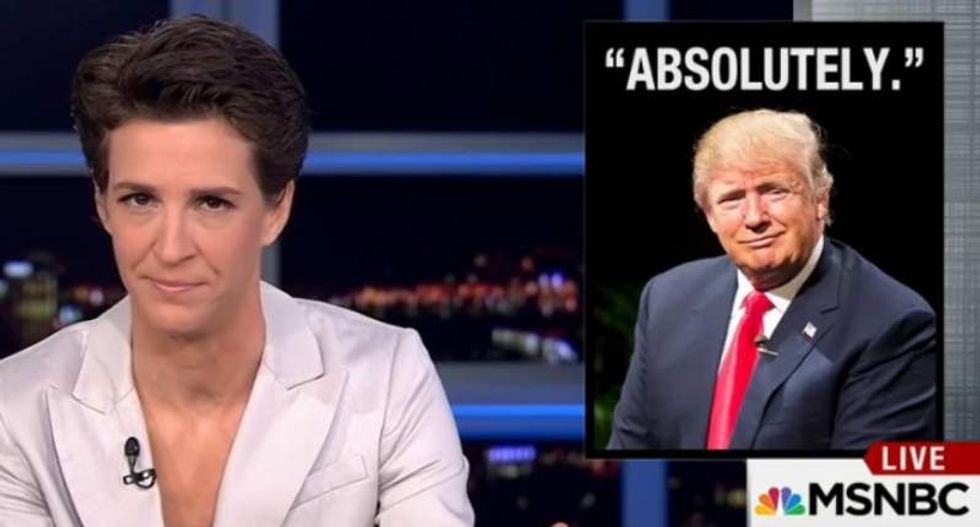 MSNBC host Rachel Maddow blasted Donald Trump and his campaign on Friday for refusing to debunk his apparent support for special "databases" and identification for US Muslims.

"Donald Trump is deep now into blaming the media for this whole scandal. Blaming the media for us reporting that he's campaigning on the idea of watchlists and databases to register American Muslims," she said. "And I know it's fashionable and politically smart to blame the media, but this is important. And somebody's gotta report this out. Somebody's gotta do something other than standing there, agog, disbelieving that this is really the top tier of the Republican contest to try to be the next president of the United States of America."

The real estate mogul said on Twitter that Yahoo News' Hunter Walker introduced the notion of a Muslim database during their interview on Friday, while also endorsing the idea of a "watch list."

But Maddow noted that Trump has never said that he would refuse to implement such a policy if elected. As NBC reported last night, he said exactly the opposite and called it "good management."

That lack of a definitive stand has opened Trump up to criticism from not only Democrats, but fellow Republican candidates, as well as both Muslim and Jewish groups.

On Friday, the Republican front-runner called into Fox News and complained that he was actually trying to respond to another reporter, while calling for a database for Syrian refugees. Maddow also pointed out that Trump made reference to an unidentified "thing we should start thinking about."

"What exactly is the thing we should start thinking about?" she asked. "Could you please be clear about that? In the immortal words of Justin Bieber, 'What do you mean?'"

Watch Maddow's commentary, as aired on Friday, below.