REVEALED: Bush and Blair went to war in Iraq despite South African intelligence proving no WMDs 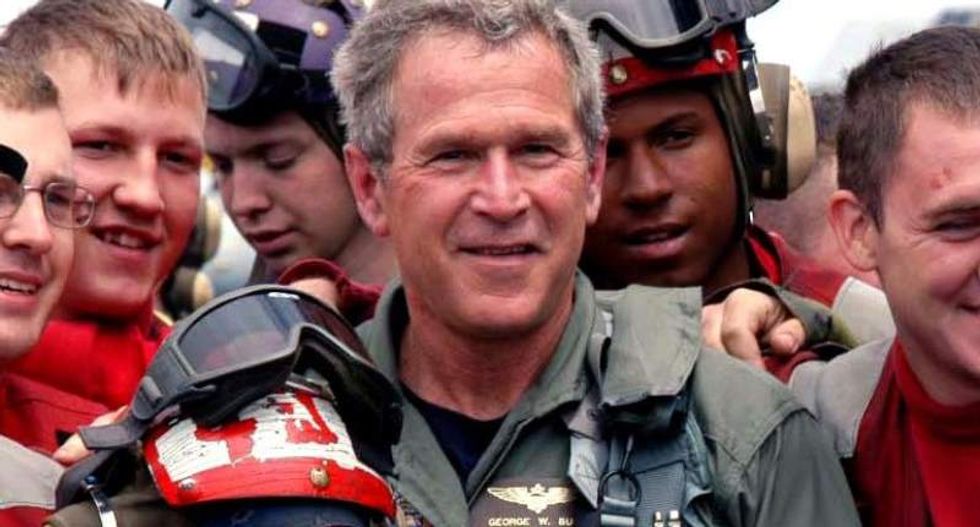 Tony Blair went to war in Iraq despite a report by South African experts with unique knowledge of the country that showed it did not possess weapons of mass destruction, according to a book published on Sunday.

God, Spies and Lies, by South African journalist John Matisonn , describes how then president Thabo Mbeki tried in vain to convince both Blair and President George W Bush that toppling Saddam Hussein in 2003 would be a terrible mistake.

Mbeki’s predecessor, Nelson Mandela, also tried to convince the American leader, but was left fuming that “President Bush doesn’t know how to think”.

The claim was this week supported by Mbeki’s office, which confirmed that he pleaded with both leaders to heed the WMD experts and even offered to become their intermediary with Saddam in a bid to maintain peace.

South Africa had a special insight into Iraq’s potential for WMD because the apartheid government’s own biological, chemical and nuclear weapons programme in the 1980s led the countries to collaborate. The programme was abandoned after the end of white minority rule in 1994 but the expert team, known as Project Coast , was put back together by Mbeki to investigate the US and UK assertion that Saddam had WMD – the central premise for mounting an invasion.

Mbeki, who enjoyed positive relations with both Blair and Saddam, asked for the team to be granted access.

“Saddam agreed, and gave the South African team the freedom to roam unfettered throughout Iraq,” writes Matisonn, who says he drew on sources in Whitehall and the South African cabinet. “They had access to UN intelligence on possible WMD sites. The US, UK and UN were kept informed of the mission and its progress.”

The experts put their prior knowledge of the facilities to good use, Matisonn writes. “They already knew the terrain, because they had travelled there as welcome guests of Saddam when both countries were building WMD.”

On their return, they reported that there were no WMDs in Iraq. “They knew where the sites in Iraq had been, and what they needed to look like. But there were now none in Iraq.”

In January 2003, Mbeki, who succeeded Mandela as president, sent a team to Washington to explain the findings, but with little success. Mbeki himself then met Blair for three hours at Chequers on 1 February, the book relates.

He warned that the wholesale removal of Saddam’s Ba’ath party could lead to a national resistance to the occupying coalition forces. But with huge military deployments already under way, Blair’s mind was clearly made up. When Frank Chikane , director-general in the president’s office, realised that the South Africans would be ignored, it was “one of the greatest shocks of my life”, he later wrote in a memoir.

Matisonn adds: “Mandela, now retired, had tried as well. On Iraq, if not other issues, Mandela and Mbeki were on the same page. Mandela phoned the White House and asked for Bush. Bush fobbed him off to [Condoleezza] Rice. Undeterred, Mandela called former President Bush Sr, and Bush Sr called his son the president to advise him to take Mandela’s call. Mandela had no impact. He was so incensed he gave an uncomfortable comment to the cameras: ‘President Bush doesn’t know how to think,’ he said with visible anger.”

On 19 March, airstrikes on Baghdad began, triggering a conflict that has dragged on for more than a decade, killing hundreds of thousands of people and contributing to the rise of Islamic State.

Mbeki’s spokesman, Mukoni Ratshitanga, confirmed that Mbeki met Blair at Chequers to advise against the war and the UK’s involvement in it. Blair disagreed, Ratshitanga said, insisting that he would side with Bush.

“President Mbeki informed the prime minister that the South African government was about to send its own experts to assist and encourage the Iraqis to extend full cooperation to the UN weapons inspector, Dr Hans Blix,” Ratshitanga said. “He urged the prime minister to await the report of the SA experts before making any final commitment about going to war against Iraq.

“The prime minister responded to this information and suggestion by telling President Mbeki that the SA experts should operate knowing that relative to the decision-making process about the then impending war, ‘it is two minutes to midnight’.”

Mbeki also had a phone conversation with Bush in 2003 and tried to discourage him from going to war, the spokesman said. “President Bush said he would rather not go to war but needed a clear and convincing signal that the Iraqis did not have WMDs to enable him to avoid the invasion of Iraq.

It is not known whether Bush did obtain a copy of the report.

Mbeki later contacted Blair to ask him to find out from the US president what would constitute a “convincing signal” from Saddam, promising that he would contact Saddam to persuade him to send such a signal, according to Ratshitanga. “President Mbeki understood from his sources and was convinced that Prime Minister Blair received his message as reported above, but did not convey it to President Bush.”

Blair’s office did not deny the meeting with Mbeki or the specifics of what was said. A spokesperson said: “All such information, including that based on limited and controlled access, would have been scrutinised and assessed by our intelligence agencies. Other intelligence agencies agreed that Saddam had weapons, the disagreement in the international community was what to do about it.

“We did not brush anything aside but of course had to act on the information of our own and other agencies. However, as we now know the outcome was that although he had used chemical weapons extensively against his own people and others, the programme did not exist in the way that was thought.”

In an interview last month , ahead of the release of the Chilcot inquiry, the former prime minister apologised for the intelligence he received being wrong, and for mistakes in planning, but said he found it hard to apologise for removing Saddam.