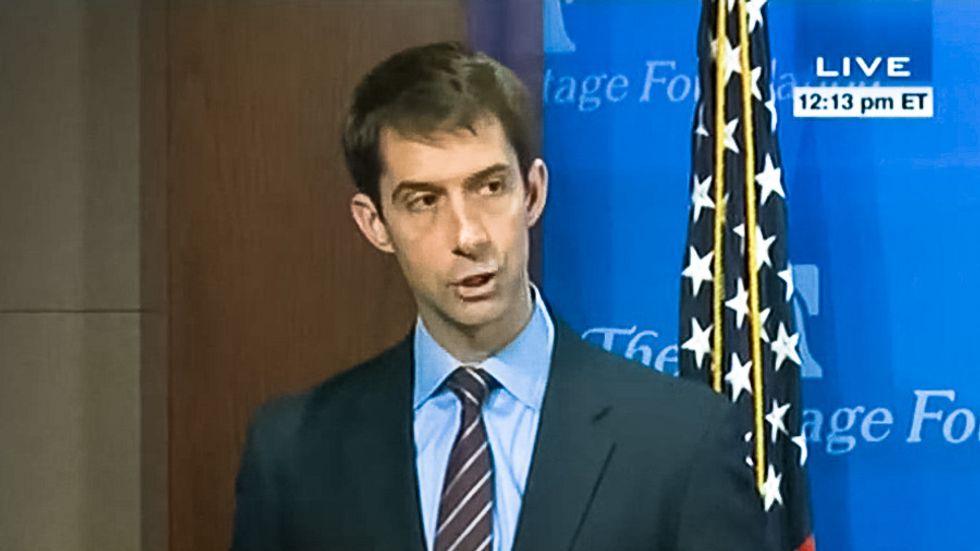 Sen. Tom Cotton (R-AR) suggested on Monday that population decline and drug abuse in poor areas could be the result of too many people on Social Security disability.

Speaking to the conservative Heritage Foundation on Monday, Cotton warned that communities with high a percentage of residents on Social Security disability had reached a tipping point that was linked to population decline. But he said that communities which used fewer benefits were enjoying a population increase.

"It's hard to say what came first or caused the other, population decline or increased disability usage," Cotton opined. "Or maybe economic stagnation caused both. Regardless, there seems to be at least at the county and regional level something like a disability tipping point."

"When a county hits a certain level of disability usage, disability becomes a norm," he continued. "It becomes an acceptable way of life and alternative source of income to a good paying full-time job as opposed to a last resort safety net program to deal with catastrophic injury and illness."

And according to Cotton, that was just the beginning of the bad news for communities with above average disability claims.

"At a certain point when disability keeps climbing and become endemic, employers will struggle to find employees or begin or continue to move out of the area," he said. "The population continues to fall and a downward spiral kicks in, driving once thriving communities into further decline."

"Not only that, but once this spiral begins, communities could begin to suffer other social plagues as well, such as heroin or meth addiction and associated crime."

Cotton revealed that he planned to introduce legislation that would single out non-permanent disability recipients and set a timeline for them to return to work.

Disabled people who are not ready to return to work would be forced to reapply for disability benefits, Cotton said.

"These reforms won't solve all the problems of Social Security disability but they will address one of the most urgent crises in the program," he concluded. "And the one, perhaps, most corrosive to effected communities."