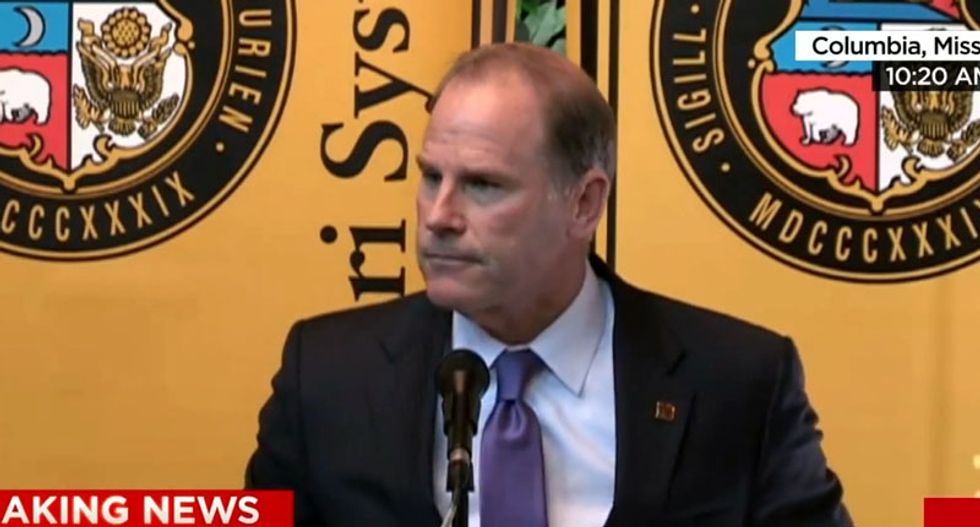 Tim Wolfe, the former president of the University of Missouri system (CNN/Screenshot)

The University of Missouri's president said on Monday he would resign after protests over his handling of racial tensions on campus rocked the school.

The university's black football players had refused to practice or play until President Tim Wolfe stepped down, and some teachers and students had threatened to walk out of class.

“My decision to resign comes out of love, not hate,” he added. "Please, please use this resignation to heal, not to hate.”

The football team suspended practice on Saturday and Sunday, and more than 30 black players had vowed not to return until Wolfe was fired or resigned.

In addition to the football team's action, one student has held a weeklong hunger strike.

Protests on campus have been led by a group called ConcernedStudent1950, which says black students have endured racial slurs and believes white students benefit from favoritism in many aspects of campus life.

Racial tensions in Missouri flared last year when a white policeman in the St. Louis suburb of Ferguson killed an unarmed black teenager and a grand jury brought no charges against the officer. The shooting kindled nationwide soul-searching about the treatment of blacks by law enforcement.