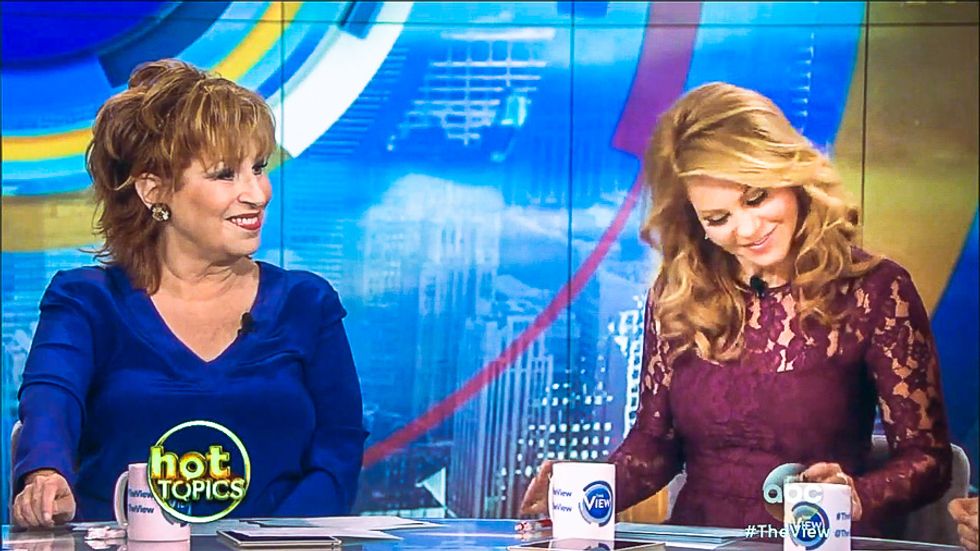 Candace Cameron Bure, the sister of evangelist actor Kirk Cameron, insisted on Wednesday that creationism was compatible with science. But she was then left speechless after Joy Behar asked to defend her remarks.

A discussion on The View about reports that GOP presidential hopeful Ben Carson's own advisers doubted his grasp on foreign policy prompted Behar to remind her co-hosts the that former neurosurgeon also rejected evolution.

"I take issue with that," Bure interrupted. "Because that does not mean that he is a dumb man or unintelligent."

"Really?" Behar replied skeptically. "I'd like to meet them."

"To say that someone who believes in intelligent design does not believe in science is silly," Bure insisted. "The two are compatible."

Bore took a deep breath and let out a nervous laugh.

"You're putting me on the spot," she told Behar.

Sensing that Bure was struggling, co-host Whoopi Goldberg called for a commercial break to allow her to collect her thoughts.

"I think I just want to make the point because it's such a big conversation about science and intelligent design," Bure explained after returning from the break. "But I believe that the two are not mutually exclusive. And Ben Carson is a man of science, he's a doctor. I mean, he is a great and intelligent surgeon."

"And so, I think for you to say that because he does not believe in evolution, to dismiss him as a candidate or an intelligent candidate is just silly," she added.

Behar argued that anyone who visited the Museum of Natural History or studied anthropology should be able to accept that evolution was a fact.

"You see that we did not arrive in this condition over the millions of years," she said.

"Also go to the Creationism Museum," Bure recommended. "And you will see the counter arguments too. But I think they are compatible."