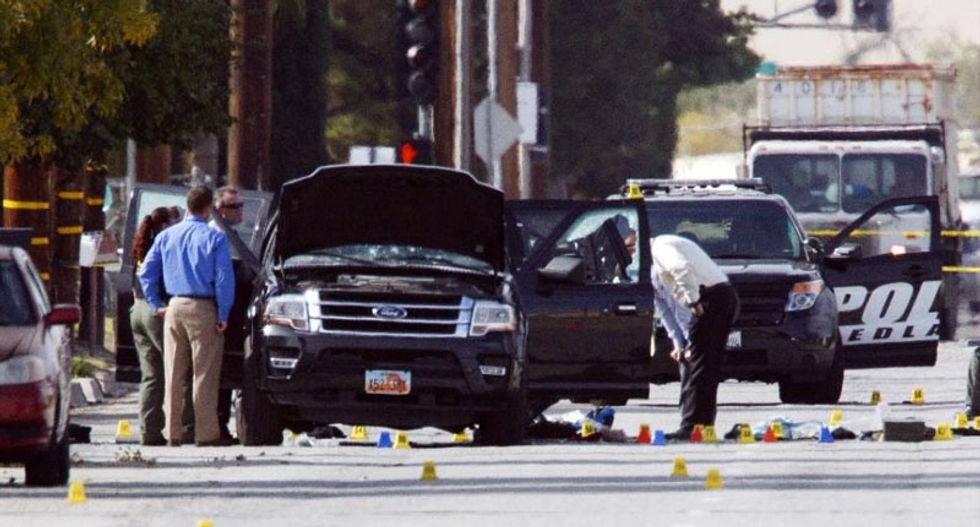 Investigators look at the vehicle involved in a shootout between police and two suspects in San Bernardino, California, on December 3, 2015 (AFP Photo/Patrick T. Fallon)

Tashfeen Malik, one of the two accused shooters in the massacre in San Bernardino, California, moved with her family 25 years ago from Pakistan to Saudi Arabia, where her father became "conservative and hard-line," a family member told Reuters on Friday.

Malik, 27, and her American husband, Syed Rizwan Farook, 28, were killed in a shootout with police hours on Wednesday, hours after the mass shooting in San Bernardino in which 14 people died.

Two Pakistani officials said Malik was from the Layyah district in southern Punjab province, but moved to Saudi Arabia with her father 25 years ago. She returned home five or six years ago to study to become a pharmacist at Bahauddin Zakariya University in Multan, they said.

One of Malik’s uncles, Javed Rabbani, said Malik’s father, Gulzar, changed while the family was living in Saudi Arabia.

"When relatives visited him, they would come back and tell us how conservative and hard-line he had become," Rabbani said in an interview with Reuters.

The father had built a house in Multan, where he stays when he visits Pakistan, according to another uncle, Malik Anwaar.

Rabbani said he had been contacted by Pakistani intelligence as part of the investigation into the San Bernardino shooting.

The Pakistani officials said Malik had two brothers and two sisters and was related to Ahmed Ali Aulak, a former provincial minister.

(Additional reporting by Idrees Ali in Washington; Editing by Doina Chiacu, Bill Trott and Will Dunham)