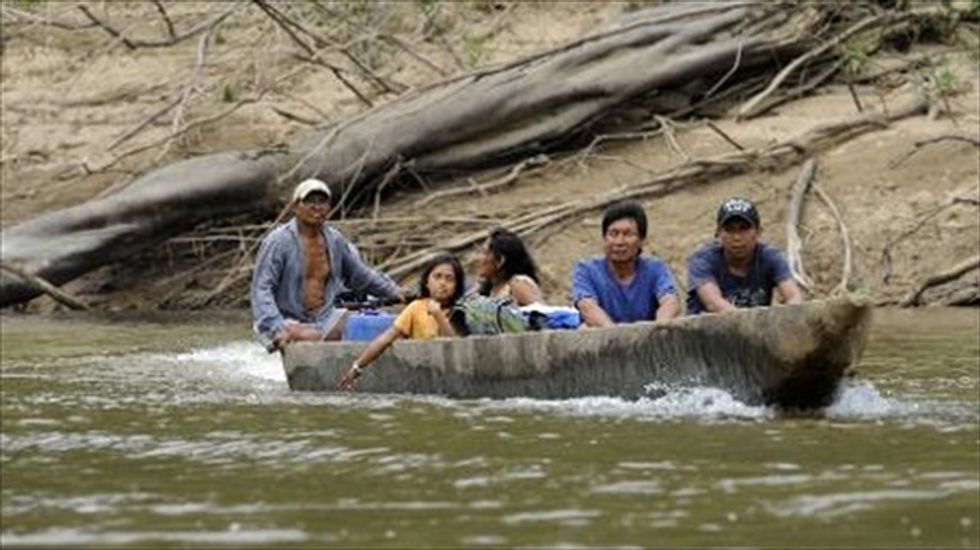 The the indigenous peoples of the Amazon are far removed from the Paris conference rooms where politicians and technocrats in dark suits hashed out a historic deal on curbing climate change to close out the year.

But they are taking bold action of a different kind to save the rich biodiversity of the planet's largest rainforest, whose survival is essential to limit global warming.

In Ecuador, one tribe has swapped hunting for growing cocoa. Another in Brazil has started managing its fish stocks. And one in Peru set up an indigenous local government to protect its environment from oil, mining and logging companies.

The Waorani barely seem to notice the stifling tropical heat in Gareno, a hamlet of wooden huts in the middle of the Ecuadoran jungle.

Every morning, they chant a ritual work song in their native language, Waotededo, before heading out to their fields for the day.

Keen to preserve their environment, in 2010 they gave up hunting, their traditional livelihood, and replaced it with farming cocoa.

The Waorani had noticed the game they hunted was increasingly hard to find.

To combat the problem, an indigenous women's group, the Association of Waorani Women of the Ecuadoran Amazon (AMWAE), created a program that gives cocoa trees to local women if their husbands stop hunting.

"They gave up hunting wild animals, and we took up farming without cutting down the forest," said AMWAE president Patricia Nenquihui.

Ten indigenous communities are participating in the project -- 70 families who farm 25 hectares (60 acres) in the eastern provinces of Pastaza and Napo.

The association buys their crop from them for $1.25 a pound -- 45 cents above the market price -- and sends it to the capital, Quito, to be made into chocolate.

At first, the men were "upset" over the program, said Nenquihui. But the older generations admitted that hunters had to walk up to one full day through the jungle to hunt the animals they sold to provide for their families.

"We opened our eyes," said Ligia Enomenga, a 26-year-old widow who is raising her six children thanks to the money she earns growing cocoa.

"Before, (the men) hunted a lot. Now they have joined the cocoa project and stopped killing animals," she said.

"We hunted a lot... Wild pigs, monkeys, toucans. Sometimes we brought out five or six quintals (500 to 600 pounds, 230 to 275 kilograms)," said Moises Enomenga, whose wife now farms cocoa instead.

In Brazil, home to most of the region's six million square kilometers (2.4 million square miles) of forest, the Paumari people are taking a similar approach to save the pirarucu, an enormous fish that can reach up to 4.5 meters (15 feet) long.

Pirarucu fishing was banned when the enormous gray and hot-pink river monsters began to disappear.

But after seven years of work with a conservation group called the Native Amazon Operation (Opan), the Paumari successfully lobbied to re-legalize sustainable fishing practices.

"It goes far beyond marketing the fish. It's about strengthening community groups, strengthening fish stocks and generating income. Those are the main sources of revenue for this community," said Gustavo Silveira, a coordinator at Opan.

"The management and control they have over their territory is a fantastic thing."

Under the program, pirarucu that measure less than a meter and a half must be released. Brazilian environmental authorities do a population count every year, and the Paumari are in charge of guarding the area's lakes from poachers.

Meanwhile, the Wampis nation in Peru has set up its own government in a bid to stop deforestation and the destructive presence of oil and mining companies on its lands.

"We're not asking for independence, simply to protect our ancestral lands and give us title to 1.3 million hectares where more than 100 Wampis communities live," said Wrays Perez Ramirez, the president of the newly formed indigenous government, which is not officially recognized by the Peruvian authorities.

"The next generations are going to need natural resources to survive."

In southwestern Colombia, the Inga people are likewise fighting to protect the biodiversity of their lands -- threatened, in this case, by the guerrilla war that has wracked the country for the past 50 years.

They have won government funding to eradicate more than 22,000 hectares of poppy fields, the raw ingredient for heroin. The fields were threatening the local ecosystem and fueling violent clashes between armed groups in the region.

"The Earth was crying... and asking us to take care of her," said Hernando Chindoy, the governor of the Inga de Aponte indigenous reserve.