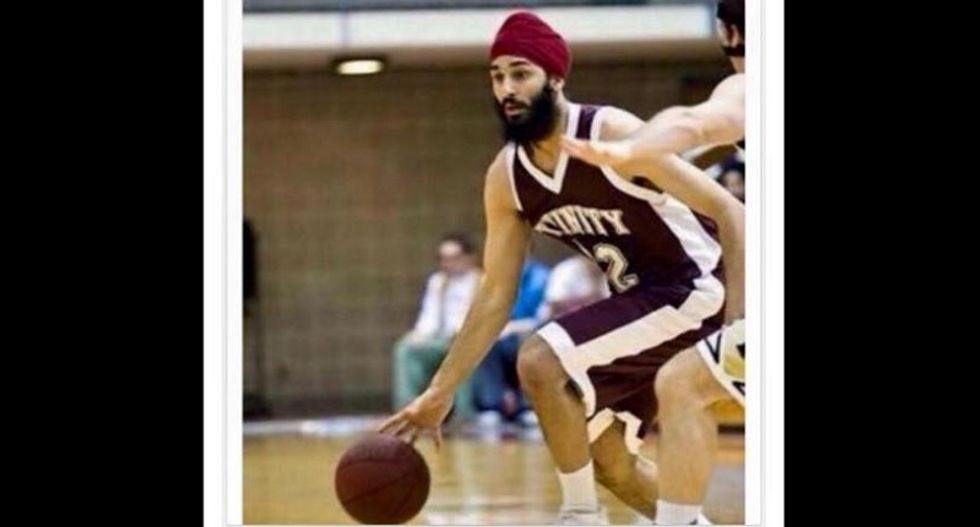 A "joke" floating around the Internet featuring a turbaned man playing basketball has been shot down by the man's friend.

The joke features a picture of the man dribbling with the caption, "No one wants to guard Muhammad, he's too explosive." But fellow Texan and graduate student at the University of Texas at Austin, Greg Worthington, posted to Facebook that he knows the player. He's not Muslim or Arab, and his name is not Muhammad.

"His name is Darsh Singh and he's a US citizen, born and bred. That jersey he's wearing in this pic, it currently sits in a Smithsonian Museum in Washington, DC because he made US history as the NCAA's first turbaned Sikh American basketball player for Trinity University in my hometown of San Antonio," Worthington wrote.

Singh was co-captain of the university basketball team when the picture was taken, he said. Since then he has worked in U.S. intelligence and the National Security Agency, and currently manages financial portfolios for "some of the most compassionate companies in the US."

Worthington pointed out that Sikhs have often been targeted for violence because they are frequently mistaken for Muslim. In one of the more high-profile cases, a white gunman stormed a Sikh temple in Wisconsin, killing six people.

But even if he was a Muslim or if he was Arab, this still doesn't make the joke okay and it still doesn't give you reason to believe that person is inherently evil or that they deserve harm," Worthington wrote.

Worthington also linked to articles that show Singh's accomplishments, from sports to business.

"It's incredibly touching to have friends and community members stand for what is right, and it's heartening to be reminded of what I truly believe -- that there is far more light and goodness in this world than there is darkness," wrote Simran Jeet Singh, Senior Religion Fellow at The Sikh Coalition. "It also reminds me of something my parents always taught me -- relationships really matter."

View Worthington's post in its entirety, as posted, here:

Let me tell you why this shit isn't funny. I know this guy and his name's not 'Muhammad.' He's not Arab, he's Punjabi....