Authorities criminalize kids for saggy pants, but not violent beatings 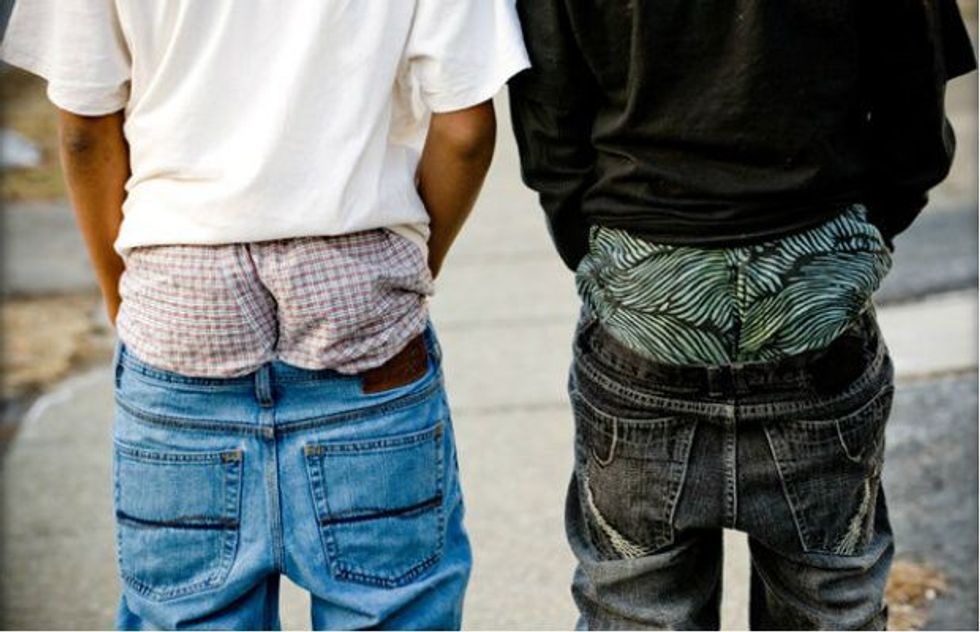 Despite the skinny jean trend that successfully convinced teens that constricting blood flow to their lower bodies is a good idea, some of Tennessee's youth are still donning saggy pants, and adults aren't fans. The issue (other than the fact that saggy pants look terrible) is that authorities in the state are going as far as jailing boys for refusing to lift up their pants.

Four Tennessee high school students have been charged with indecent exposure, and two of them were jailed for 48 hours because the authorities felt that playing fashion police was more important than keeping the community safe from real crime. The school resource officer at Bolivar High School claims he asked the boys to pull up their pants repeatedly, and since they refused to do so, they were slapped with charges that could result in them being placed on the state's sex offender registry.

According to the state's sex crime laws, a person who has three or more convictions of indecent exposure is required to register as a sex offender. Although I absolutely hate the baggy travesty that got these teens in trouble in the first place, does it make sense to criminalize something that doesn't really harm anyone?

While it's true that it's irritating to see some teen's colorful boxer briefs while his pants are nearly down to his ankles, the hyper-sexualized mass media we both willingly and unwillingly consume on a daily basis makes the questionable attire seem tame.

Juxtapose the saggy pants story to a viral video from Alaska that features a group of teenage girls beating their friend viciously at a sleepover. The ten minute video of Naomi Johnson getting attacked was so brutal that her parents pulled her out of school and filed a civil suit against the mother who hosted the slumber party.

As of now, the four girls who viciously kicked, punched, and dragged Johnson are not facing any criminal charges. The school the attackers go to has also neglected to take any action. Authorities in Anchorage released a brief statement about their investigation into the incident, which occurred months ago:

“The incident was first reported to APD on July 26, 2015, and an investigation was initiated,” police said in their statement “The video of the incident was received by police approximately two weeks after the initial report. This incident has been investigated and final reports are being sent to the Division of Juvenile Justice (DJJ).”

So far it seems unlikely that the girls will face any assault charges, regardless of the fact that they proudly posted smartphone video evidence of their assault online. One of the attackers allegedly threatened to stab Johnson the next time she saw her, which proves how easily teens are emboldened by escaping consequences for violent actions.

Both stories come from two different parts of the country, but it does go to show you where our priorities are. Certain behavior tends to get a pass when they're perpetrated by innocent looking girls. At the same time, we allow preconceived notions and stereotypes to cloud our judgement when we see minority students dressed a certain way. It's interesting that saggy pants make people uncomfortable because they symbolize violent gang behavior, and the teens who actually carried out an act of violence were dressed in bedazzled jeans. Looks can be deceiving.

It's time adults stop policing the fashion choices of kids, and work harder to educate them about the consequences of bullying and beating their peers. Unfortunately for school administrators and authorities, the latter takes hard work. Dress codes are just easier to enforce.