Bernie Sanders opens can of whoop-ass on 'pathological liar' Donald Trump: 'Much of what he says are lies' 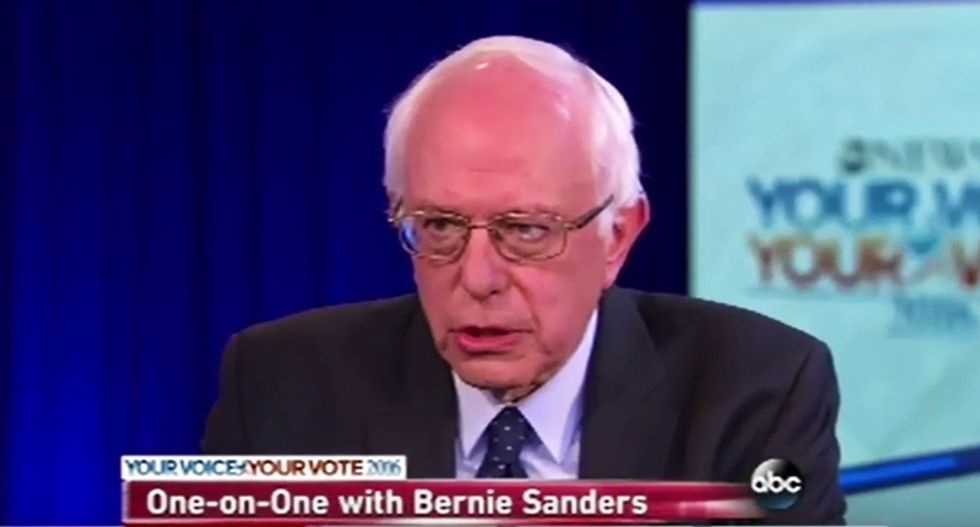 Sen. Bernie Sanders (I-VT) lambasted GOP presidential aspirant Donald Trump on Sunday,  calling the blustery billionaire a "pathological liar" over claims he has made while on the campaign trail

Speaking with host George Stephanopolous on ABC's This Week, Sanders got right to the point when asked about Trump

"I think, and I say this straightforwardly, you've got a pathological liar there," he stated. "I think much of what he says are lies or gross distortions of reality."

Sanders hit on Trump's claims that he saw thousands of Muslims celebrating as the Twin Towers collapsed on 9/11,  saying , "Either that's true, or it's not true."

"From what I understand there has been a lot of research, they archive what goes on television, you're a TV guy, right? Everyone was saying it's gotta be archived. Either it is true or it's not true," he said. "Nobody has seen a tape of thousands of people celebrating the destruction of the Twin Towers in New Jersey. It doesn't exist and he keeps claiming it. That's called pathological lying."

"What somebody like a Donald Trump is doing, is playing on the fears and anxieties of the American public," Sanders explained. "And people are afraid. They're afraid of terrorism, rightfully so. They're anxious about an economy in which the middle class is disappearing, we're seeing massive examples of income and wealth inequality, people are worried about the future for their kids. These are legitimate fears. So instead of having a rational discussion about how we rebuild the middle class, how we deal with Wall Street, how we have a tax system in which the wealthy and powerful start paying their fair share of taxes -- what Trump is saying is, 'It's all the Muslims fault. It's all the Mexicans fault.'"