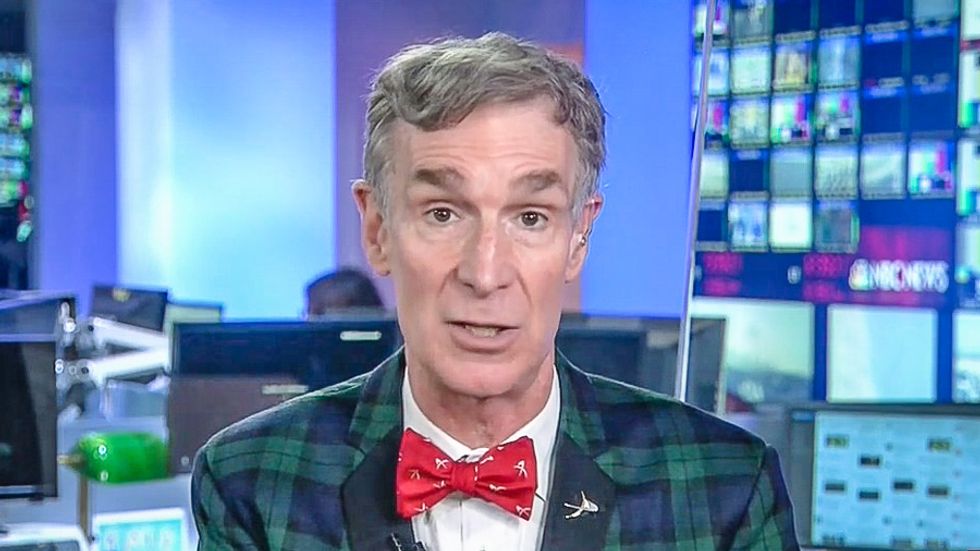 Science advocate Bill Nye explained on Tuesday that many parts of the United States were expected to see record temperatures over the Christmas holiday because of weather patterns associated with climate change and El Niño.

The month of December has already seen about 6,000 record-breaking warm temperatures across the United States, and experts predict that there could be dozens more before the end of the year.

But Nye pointed out during an interview with MSNBC that meteorologists were refusing to utter the words "climate change" to their viewers.

"We have a situation where no one in regular television will say the phrase 'climate change,'" Nye declared, calling out MSNBC meteorologists by name. "Nobody will mention this phrase. But the world's getting warmer so when there's an El Niño event, which is where the surface of the Pacific Ocean gets a little warmer, yes, you get these two things here in North America. You get more moisture in the atmosphere out west, which generally leads to more snow, which is what we have."

"And then you get the warm weather back east," he continued. "Since there's more heat energy in the atmosphere, these two phenomena are amplified."

The term climate change was accurate because "the local climates are changing," Nye said. "So why nobody will say anything about this is what I would call charming and also troubling."

"I think it's been discussed extensively," Russert insisted.

Considering the political impact, Nye asserted that the eventual Republican presidential nominee may have already lost the election because none of the remaining GOP candidates accept climate science.

"I have a question for you, hard hitting political journalist," Nye said to the MSNBC host. "Yes, a conservative can win the primaries without any millennial votes, right? Nobody in their 20s and early 30s is needed to win the primaries."

"But can a conservative win the national election for president and deny climate change and alienate millennials?" he continued. "It's a near-run thing. It's a very close call."