Bulletproof backpacks for kids? Here are 10 sick products you can buy in America -- thanks to the NRA 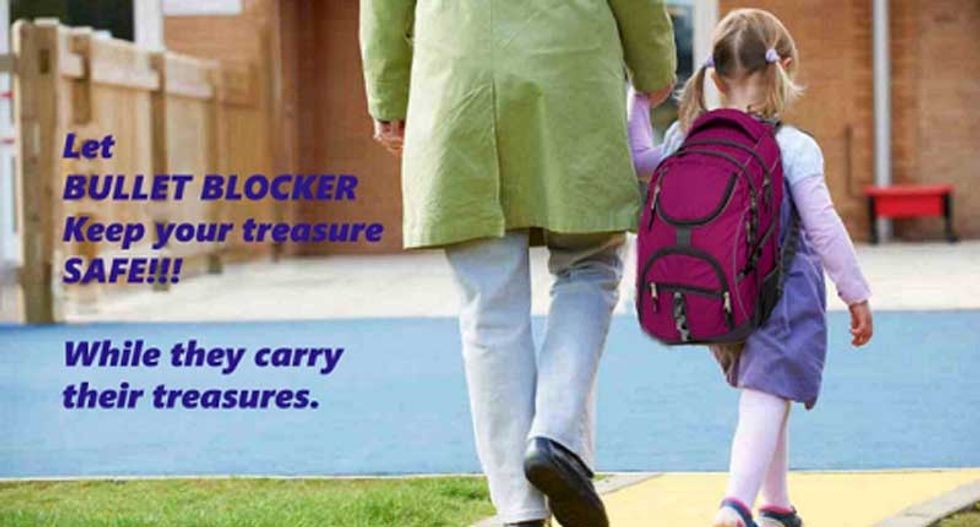 Just one day after the most recent mass shooting in America, Senate Republicans voted against a bill that would have prevented gun purchases by suspected terrorists. The official reasons—as if they ever might be valid—have something to do with “liberty” and “freedom.” The real reason, as we all know, has everything to do with the NRA and a gun lobby that has proved itself quite the smart shopper, having bought up a significant portion of Congress.

When a lack of gun control and a culture of gun violence collide with capitalism, the result is a market for the kinds of goods that speak volumes about a society, nearly all of them tragic and troubling. So let’s have a look-see at what our weapons worship hath wrought. Here are 10 things you can buy in America that prove how f*cked up our gun laws are.

There may be other manufacturers of bulletproof blankets for use during school shootings, but the industry leader is Protecht, which developed the Bodyguard blanket after the Sandy Hook massacre. I’m not sure anything does a better job of encapsulating why the viability of this product should be a source of national shame than the text on the website itself.

“Bodyguard™ blanket was developed and tested to specifically protect our children and teachers in the event of a school shooting...It is made of the same materials our U.S. soldiers wear while in battle, and is equal to or exceeds the protection used by our police departments. After extensive research, it is estimated that Bodyguard™ blanket provides bullet resistant protection against 90% of all weapons that have been used in school shootings in the United States. We are so confident in the protective properties of Bodyguard™ blanket we are encouraging every administrator to make it an integral part of school and university lockdown protocol.”

For the most part, book, pencil and eraser manufacturers have been churning out school supplies that are totally useless against a spray of bullets. What good is a backpack full of books in the middle of a school shooting? But with bulletproof backpacks, you can make sure your kids are prepared to deal with the repercussions of our Congress’ inaction on gun control. Right after Sandy Hook, companies selling armored backpacks reported a precipitous rise in sales, and the number of manufacturers has only expanded since then. And with no probable change in gun laws in sight, it’s an area primed for growth!

Because you never know when our politicians’ cowardice will trickle down in the form of a shot-up classroom, schools are now investing in dry erase boards that can absorb a hail of bullets. In 2013, the University of Maryland Eastern Shore spent nearly $60,000 on whiteboards that “double as bulletproof shields.” And last year, a middle school in New Castle, Delaware, bought bulletproof whiteboards for all faculty and staff. Speaking to the Washington Times, a guidance counselor at the school expressed hope that the bulletproof boards “will never get used,” but also shared that the tablets serve as a sort of security blanket. “I think it makes us feel a little safer,” she said, “like, we have something for us to defend ourselves in case something horrible happens.”

Mass shootings can happen anywhere in America—supermarket parking lots, community health clinics, historic black churches—so bulletproof clothes must be diverse enough to fit any occasion (during which you might be shot to death). If you imagine a simple, drab vest when you hear “armored clothing,” then forget everything you think you know about bulletproof fashion. Now there’s a chance you might survive a random shooting even if you’re wearing a tasteful leather coat, a classic jean jacket or—since mass shootings know no particular season—a summery tank top. And for the executive who insists on looking sharp and maybe surviving an office massacre, a bulletproof suit jacket.

With senseless bloodshed and mass shootings now a daily reality in America, foreign manufacturers of “ballistic protection” are staking their claim in the U.S. market. Enter Miguel Caballero, a bulletproof vest maker who started making kids' clothes after the Sandy Hook massacre. “After the tragedy in Connecticut, we started getting emails from customers asking for protected (clothing) because they were afraid to take their kids to school,” Caballero told the Seattle Times in 2013. Is it slightly ironic that Caballero’s firm is based in Colombia, a place Americans have feared for almost four decades? Kinda. “The products were created with the American market in mind,” Caballero added, “not for the Latino market.”

The SchoolGuard app, which describes itself as “a panic button in the hands of every teacher and staff,” aims to cut down on police response times when school shootings happen, as they so often do in America. After the first shots are fired, the app calls 911, lets all the faculty and staff know what’s happening, alerts participating schools within a five-mile radius and “instantly alerts all participating law enforcement officers, on and off duty, who are in close proximity.” The app sounds like a helpful aid to school personnel, though not quite as helpful as a Congress that wasn't in the pocket of the NRA.

As a signifier of Americanness, baseball hats are up there with doing absolutely nothing to pass gun laws to help put an end to mass shootings. Which makes the BulletSafe Bulletproof Baseball Cap possibly the most American thing ever. According to the company website, it can handle a variety of calibers, including “.22LR, .38, .380, .40, 9mm and .45ACP rounds.” And if you’re worried about the potential deadly force of impact, the FAQ notes that “the amount of impact you would feel is on the order of twice the impact of being hit in the helmet with a hockey puck. Is that enough to give you a concussion? Maybe? It is certainly in that range, but a concussion would be a welcome outcome when compared to the damage a bullet would do to the same area without protection.” So the next time a random shooting breaks out, be sure to hold onto your hat, provided it is bulletproof.

From how-to guides describing what’s needed to survive a school shooting to young adult novels that feature school shootings as a plot device, mass shootings have inevitably made their way into our literature. Goodreads lists 51 novels “about school shootings, their premeditation, and aftermath.” (School shootings even qualifies as a genre on the site.) Art mirrors life.

For the most part, this list includes products developed to offer safety in the absence of common-sense gun control. But the bedside gun holder is an example of the craziness of gun culture itself. Tiger Holster, one of the manufacturers of the product, rhetorically asks consumers, “You hear a noise in your home...what do you do?” The answer, according to the company is, “You reach for your bedside weapon, that’s what.” There’s also a picture of how the bedside gun holder looks with a dog sitting near it, because they thought of everything.

God and guns: It’s as if America is parodying itself in the most horrifying way possible.