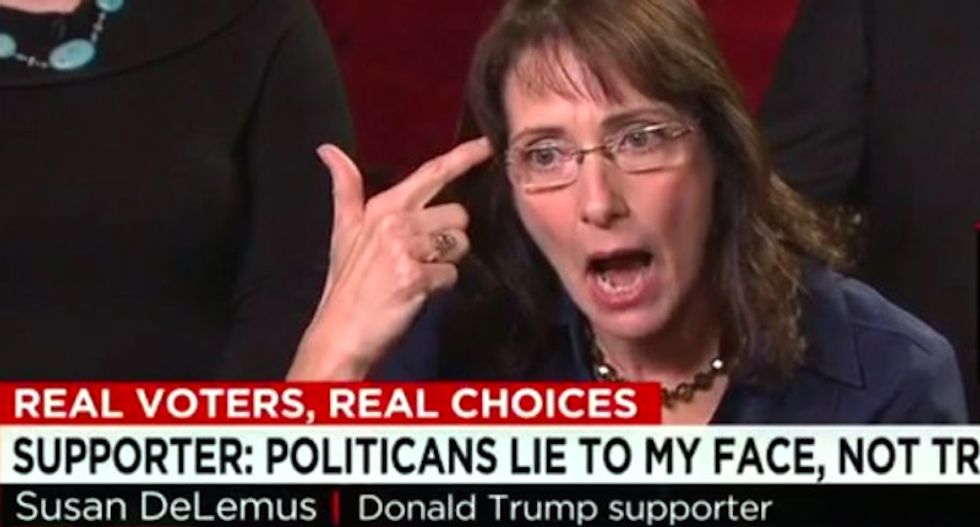 A woman who called President Barack Obama a liar on CNN said she -- or her new political idol Donald Trump -- were never involved in politics until the 2016 campaign season.

"I'm telling you, he says what I'm thinking," Susan DeLemus said on a CNN panel. "Never been involved in politics, never had an interest in any of it. Now suddenly, he is resonating."

Whether she was referring to herself or Trump not having political experience, neither claim is true.

DeLemus, a far-right elected leader for the state of New Hampshire, and Trump have both long been active in the so-called "birther movement," a group of conspiracy theorists who believe President Barack Obama was not born in the United States. Trump has flirted with a presidental run as far back as 1999.

Susan DeLemus was elected in 2010 as a Republican to the state House of Representatives. In 2011, she was one of the state lawmakers who fought to keep Obama's name off state ballots because they believed he was a "treasonous liar" who wasn't born in the States, according to the Atlantic.

"It just makes me want to throw up," Rep. Susan DeLemus had said at the time. "Let's just bury the Constitution now and have a funeral."

Here she is accosting state officials about her false accusation that Obama is not a natural-born citizen.

DeLemus' husband, Jerry DeLemus was part of the armed insurgency at Bundy Ranch in Nevada last year. He also made an unsuccessful run for sheriff. In 2012, the DeLemus couple had endorsed far-right Republican Rick Santorum.

The couple has participated in CNN panels about Trump's 2016 candidacy in the past, but Susan DeLemus was not identified as a lawmaker.

(Editor's note: This article has been updated)