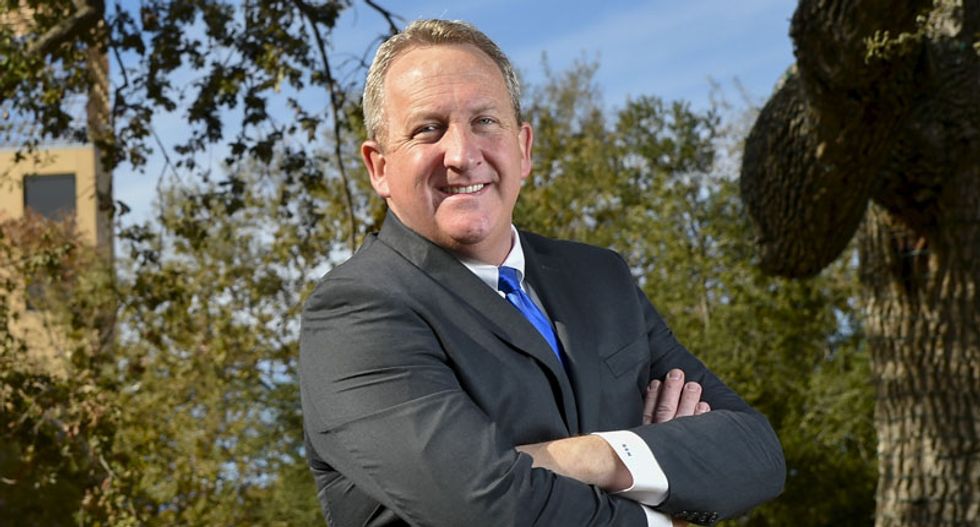 One Sunday two years ago, Pastor Rob McCoy, who believes in banning abortion and gay marriage and putting prayer back in schools, stood at the pulpit of his California mega church and announced he was endorsing a political candidate: himself.

“Every single person in this room has been inculcated and trained to think that any time a pastor opens his mouth to talk about politics from the pulpit, somehow that’s wrong,” said the 51-year-old McCoy. "You’ve been taught incorrectly. There should be no other place that you should speak of it but from the pulpit.”

McCoy lost his bid for the California State Assembly but, with the help of 650 volunteers, mostly from his church, he later won a seat on the Thousand Oaks, California, city council.

McCoy represents a tactical shift within a Christian far right seeking to regain its political influence after losing several big battles in the so-called culture wars, including the Supreme Court ruling this year allowing gay marriage. That shift is being brought into sharp focus as activists prepare the battleground for the 2016 general election.

At the center of the effort is the American Renewal Project, an umbrella group that says it has a network of 100,000 pastors. It is headed by evangelical Republican political operative David Lane, who wants to recruit 1,000 pastors to run for elected office in 2016.

So far, roughly 500 have committed to running, Lane told Reuters.

“This is a fundamental shift in strategy,” said John Fea, a history professor at Christian Messiah College, who is nevertheless skeptical the effort will produce the desired results. “Rather than forcing this from the top down, this is about a grassroots approach to changing the culture by embedding ministers in local politics from the ground up,” he said.

In some instances, pastors are trumpeting their candidacies or those of other evangelicals directly from the pulpit, in violation of Internal Revenue Service rules governing tax-exempt churches. Some are launching church-wide voter registration drives.

One, Brad Atkins, pastor of South Carolina's Powdersville First Baptist Church, said he has just finished registering every eligible voter in his church of 300. “I even lick the envelope and stick on the stamp for them,” said Atkins.

Several of the pastors in Lane’s network were instrumental in last month’s defeat of Houston's “transgender bathroom bill,” the local ordinance that banned discrimination against sexual orientation and gender identity in public places. The pastors united to decry the measure and encourage congregants to sign a petition that eventually put the new law to a ballot initiative, where it was voted down.

White evangelicals make up about 20 percent of the U.S. population, according to the Public Religion Research Institute, and have long represented a key voting bloc for Republicans. While less organized as a national and cultural force than in the 1980s and 1990s under the leadership of Jerry Falwell's Moral Majority and the Christian Coalition, evangelicals still reliably turn out for presidential elections.

In 2004, they were instrumental in President George W. Bush's re-election bid, when strategists made a concerted effort to mobilize them and used some of the voter registration strategies Lane advocates today. They turned out in similar numbers in 2008 and even 2012, when Mitt Romney, a Mormon who many evangelicals considered too moderate, was the Republican nominee, according to a report by the Pew Research Center.

In the runup to November 2016, Lane says he is holding conferences in hotels across the country nearly every week, bringing together thousands of far right pastors and their wives for two-day, all-expenses paid retreats. There are lectures on running political campaigns, turning out voters, and injecting sermons with a healthy dose of politics.

They are lessons pastors such as Beryl Amedee put into practice after attending one of the gatherings over the summer, where she learned how to deal with the media and fend off attacks on her religion. In November, Amedee won a seat as a Louisiana state representative, beating out an 8-year incumbent.

“In the 1970s, our attitude was, 'We are not of this world, Jesus is coming, so why bother with government?',” said Amedee. “Now, we know we are the government.”

Helping fund the events are political donors like the billionaire Wilks brothers, who have given up to $10 million according to sources close to the family. The Wilks, together with their wives, have also given $15 million to a Super PAC supporting the presidential campaign of Texas Senator Ted Cruz, a favorite of evangelicals.

"THE LORD IS LEADING ME"

Cruz, who has shown up at about 10 of the events this year alone, appears to be the candidate who may benefit most from Lane's drive. He attended a recent gathering at a hotel in Chantilly, Virginia, where about 200 pastors and their wives listened to a series of speakers.

Lane's speakers paint a picture of an America where religious freedom is under assault by secular forces. One case often cited is that of the Washington state flower shop owner who was sued for discrimination because she declined to provide arrangements for a gay wedding.

After attending several of Lane’s events last spring, Pastor Jack L. Martin went on to announce to his congregation in November, “I feel the Lord is leading me to enter the congressional race here in the Florida 11th District,” he said.

Critics say openly discussing politics from the pulpit - even announcing plans to run for office - threatens the concept of separation of church and state. It is also prohibited by the IRS, if churches want to remain tax exempt.

Since 2012, about 900 preachers from evangelical fundamentalist churches across the United States have made recordings of politically infused sermons and sent them to the IRS. The federal tax agency, which declined to comment, has yet to take any action.

Lane and his network of pastors say they are well within their rights to bring politics into the church. “The founding fathers never meant for the church not to participate in government,” said Lane. “They meant for the government not to interfere with the church.