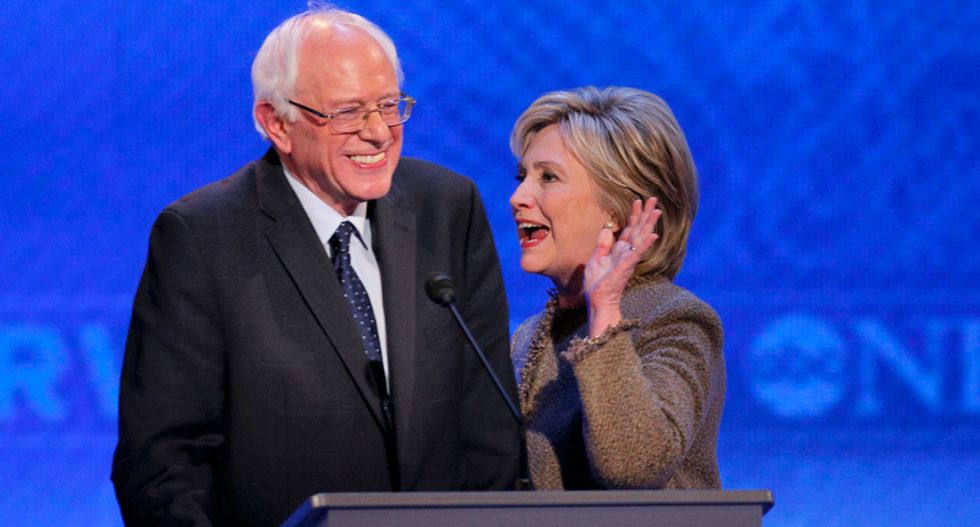 U.S. Democratic presidential candidates clashed over who has been strongest on gun control at a debate on Saturday where a dispute over a campaign data breach intensified the battle between front-runner Hillary Clinton and Bernie Sanders.

Clinton, Sanders and a third candidate, former Maryland Governor Martin O'Malley, also debated the best way to defeat Islamic State militants and prevent "lone wolf" attacks like the one carried out by a radicalized Muslim couple who killed 14 people in a Dec. 2 shooting spree in California.

O'Malley, who is lagging in polls behind former Secretary of State Clinton and U.S. Senator Sanders in the race for the 2016 Democratic presidential nomination, accused his opponents of adopting a more aggressive stance on gun control in the wake of a number of mass shootings this year culminating with the massacre in San Bernardino, California.

O'Malley charged that Islamic State militants have advised recruits that the best way to get a weapon in the United States is at a gun show where rules are more lenient on the purchase of a firearm. This is a result, he said, of "flip-flopping" by Sanders and Clinton.

Sanders said he had lost an election in Vermont for a gun-control stance and Clinton said she had backed gun-control measures.

The Democrats' third debate was marked by controversy from the start over a recent data breach of Clinton's campaign voter files by a Sanders staffer, who was subsequently fired.

Sanders apologized to Clinton for the breach.

"Yes, I apologize," he said when asked about the controversy during the debate, but he renewed his criticism of the Democratic National Committee for freezing access to his own voter files until the issue was resolved late on Friday.

Clinton, whose campaign said Sanders made a number of breaches into Clinton computer files, accepted the apology and said it was time to move on.

"I very much appreciate that comment, Bernie," she said. "Now that I think we’ve resolved your data, we’ve agreed on an independent inquiry, we should move on. I don’t think the American people are all that interested in this."

She said Islamic State militants are showing videos of billionaire tycoon talking about his proposed ban as a recruitment tool.

Clinton said "the first line of defense against radicalization is in the Muslim community," and that all Americans should work with them.

The rising tensions between Clinton and Sanders, who have largely refrained from attacking each other, occurred at a crucial moment for Sanders, a democratic socialist who is trying to close the gap in the race six weeks before Iowa holds the first nominating contest.

On Friday, Sanders filed a lawsuit to force the DNC to restore access to his voter files, which it had blocked after the Sanders campaign improperly accessed files generated by the Clinton campaign. The DNC and Sanders reached a late-night deal restoring access for Sanders.