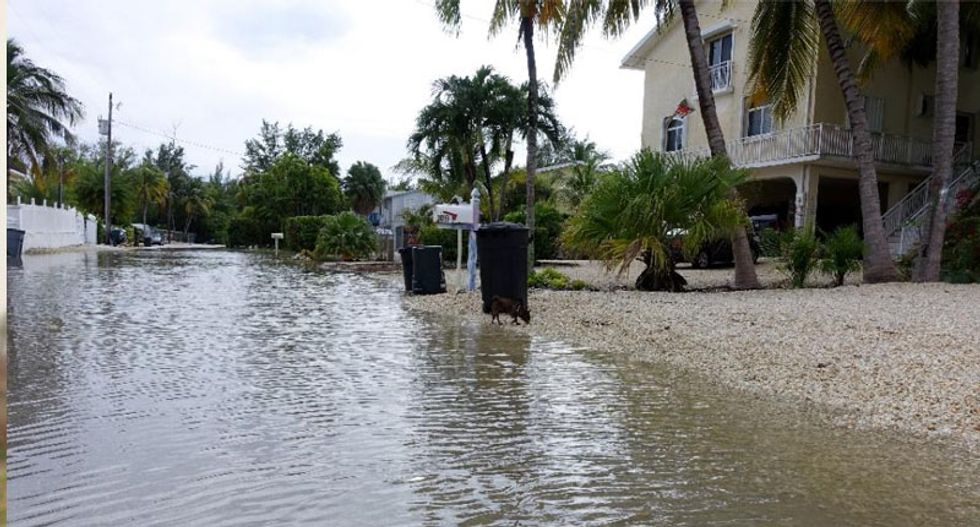 Adams Drive in Key Largo, Florida has been flooded for nearly a month, after high tides were exacerbated by a super moon (AFP Photo/Kerry Sheridan)

Deadly extreme weather on at least five continents is driven in large part by a record-breaking El Nino, but climate change is a likely booster too, experts said Monday.

"It is probably the most powerful in the last 100 years," said Jerome Lecou, a climate expert at the French weather service Meteo France, noting that accurate measurements have only existed since the mid-20th century.

Flooding and mudslides unleashed by torrential rains have killed at least 10 people and driven more than 150,000 from their homes in Paraguay, Argentina and Uruguay in recent days.

In central and southwestern United States -- where temperatures in Texas are forecast to drop from a balmy 28 degrees Celsius (82 degrees Fahrenheit) Saturday to zero (32 F) on Monday -- clashing weather fronts have given rise to snow-packed blizzards, freezing rain and a spate of tornadoes that have claimed at least 43 lives.

Across the Pacific, meanwhile, wildfires in Australia fanned by high temperatures and super-dry conditions have engulfed more than 100 homes outside Melbourne, with hundreds more threatened.

Across south and southeast Asia, monsoon rains essential for life-sustaining crops have been limited, while drought in eastern Africa means millions will require food aid, especially in Ethiopia, according to Oxfam.

"The role of El Nino on much of what we are seeing around the planet is obvious," said Herve Le Treut, a climate scientist and director of the Pierre-Simon Laplace Institute, which is a federation of French research centres.

El Ninos, which emerge every four to seven years on average and run from October through January, are triggered by a shift in trade winds across the Pacific around the equator.

Warmer surface water that normally accumulates in the eastern Pacific moves to the west, leading to heavier rainfall along the west coast of the Americas and drier-than-usual conditions in Australasia and southeast Asia.

This year's El Nino is the most powerful ever measured, surpassing the one in 1997-98, both in terms of ocean surface temperature -- up by more than 3C (5.4F) -- and the surface area affected, said Lecou.

As was true in 1998, this year's super El Nino will have contributed to making 2015 the warmest on record, worldwide.

But the reverse may also be true, with climate change boosting the power of cyclical El Nino events.

"This naturally occurring El Nino and human-induced climate change may interact and modify each other in ways which we have never before experienced," Michel Jarraud, head of the World Meteorological Organisation in Geneva, noted last month.

But the multiplier effect of climate change on extreme weather events -- while predicted by climate models -- is very difficult to establish on a case-by-case basis, scientists caution.

The tornadoes, for example, that ripped across populated stretches of the Dallas-Fort Worth metropolis in Texas cannot be directly linked to global warming, even if generally warmer conditions may favour their occurence.

Likewise the heavy rains and flooding that have devastated parts of northern England, where the government dispatched hundreds of soldiers for emergency assistance.

"Milder winters favour rainfall, such as what we are seeing in England," said French researcher Jean Jouzel, former vice chair of the UN's top panel of climate scientists.

But such extremes could still fall within the boundaries of natural cycles, independent of climate change, he added.

This year's El Nino is credited with the largest number -- nine, in total -- of major Pacific hurricanes in a single season, along with the single most powerful hurricane ever recorded.

Patricia, packing 320-kilometre (200-mile) per hour winds, was downgraded to a tropical storm by the time it struck Mexico in October.