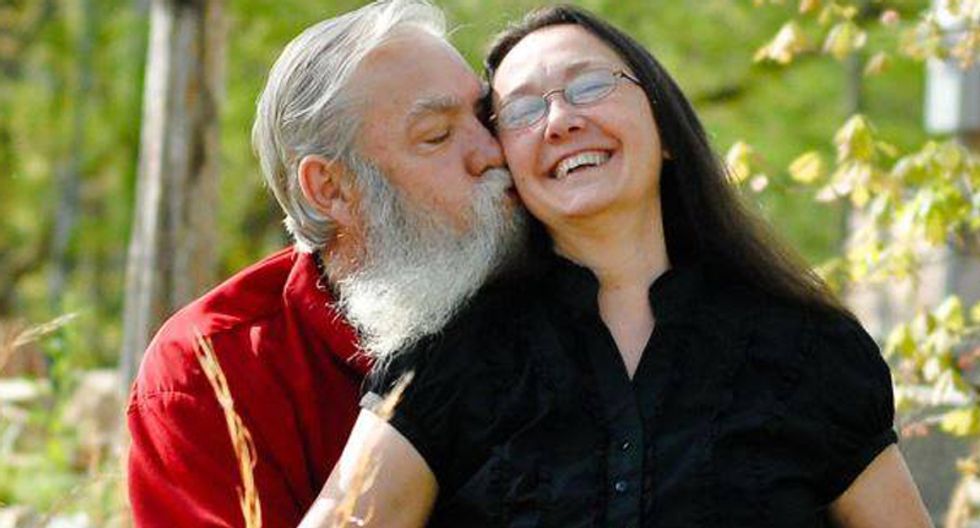 [We] knelt on bended knee and cried out to God, “This one has brought a great delusion that we can’t defeat. Remove him from our lives.” Within hours that one was destroyed. ...We were stunned into holy silence. So we silently, behind closed doors, met eyes and fearfully marveled at God’s decisiveness. His answer was more than we asked for, and so completely terminal.

The abrupt answer built faith and brought extreme temporary relief in the battle that was waging against us. Now we must face a new enemy and are publicly asking God to make a new statement.

This chilling declaration is part of a public prayer request posted by Debi Pearl, wife of Christian evangelist, Michael Pearl, whose controversial parenting manual, To Train Up a Child, advocates child abuse and has been linked with at least three deaths of young children at the hands of their own Christian parents who implemented Pearl’s harsh, “spare the rod, spoil the child” discipline advice.

Debi Pearl is a regressive fundamentalist leader in her own right. Her book, Created To Be His Help Meet, teaches Christian wives to anticipate and meet their husbands’ every need, want, and desire, regardless of the cost to themselves and their children:

“God made you to be a help meet to your husband so you can bolster him, making him more productive and efficient at whatever he chooses to do. You are not on the board of directors with an equal vote. You have no authority to set the agenda. But if he can trust you, he will make you his closest adviser, his confidante, his press secretary, his head of state, his vice-president, his ambassador, his public relations expert, maybe even his speech writer -- all at his discretion.”

According to Suzanne Titkemeyer, blogger and administrator of the spiritual abuse recovery site, No Longer Quivering, it appears that Michael and Debi Pearl are facing legal challenges related to their advocacy of male dominance and parental tyranny.

“They make legal judgments against that fact that we would dare to believe God teaches that a woman should submit to her husband, and that children should be trained according to the Word of God. They are the dogs tearing at anything bearing the name of Jesus.”

While Debi mentions “secularists” who make no apology that they “hate Jesus,” her post implies that it is actually fellow fundamentalist Christians who are making “legal judgments” against the Pearl family:

“We can ignore the dogs of this world who rail at the Christians, but sometimes the dogs come dressed in sheep’s clothing. It is very sad and troubling when the dogs wear Christian faces. ...It is a sobering thought that Satan can come at us wearing the face of fellow believers—friend even. But if it was so with Jesus and his apostles, we can expect no less.”

Pearl goes so far as to call the “evil dogs” who are bringing legal action against her family, “the enemy of GOD.”

The obvious answer, according to Debi, is prayer … but she is not content with the usual, banal, “bless your enemies, pray for those who persecute you,” prayer which Jesus reportedly advocated. No … Debi Pearl has a more permanent solution in mind which she’s delirious enough not to hesitate to post on the Internet: Please join us in praying that God will strike our enemies dead!!

“Lord God, we ask that you step in and bring down the evil that is set against Michael Pearl’s family. Bring to an end all those that testify in lies and deceit.”

I shared Debi Pearl’s “prayer request” on my Facebook page. Here are just a few choice responses from my friends and fellow spiritual abuse survivors:

“It was people like this that made me back away from evangelical fellowship. Just under the surface of all the love and perfect unity people were praying - against EACH OTHER! And I thought, "they all disagree even under the same roof. Everyone can't be right". And they would amp up the rhetoric like this crazy lady.” -- M. Weber

“Just recently parents the Pearls helped warp with their thinking were convicted for slaughtering their adopted daughter and beating/terrorizing their adopted son. I'm part of the adoption community and these two completely make us sick. They are not only self aggrandizing and delusional, but dangerous and have proven to be a real harm to children.” -- A. Wesley

“How arrogant these people are--they think they are bearing the name of Jesus. And that their God is speaking to them, justifying the decisions they make and the horrible things they do. Or at least what they tell themselves to avoid taking responsibility for their words and actions.” -- C.A. Malpica

“Pity for every family who has brought the curse of abuse upon their children and themselves by following the Pearl's lies.” -- M. Dolon Hickmon