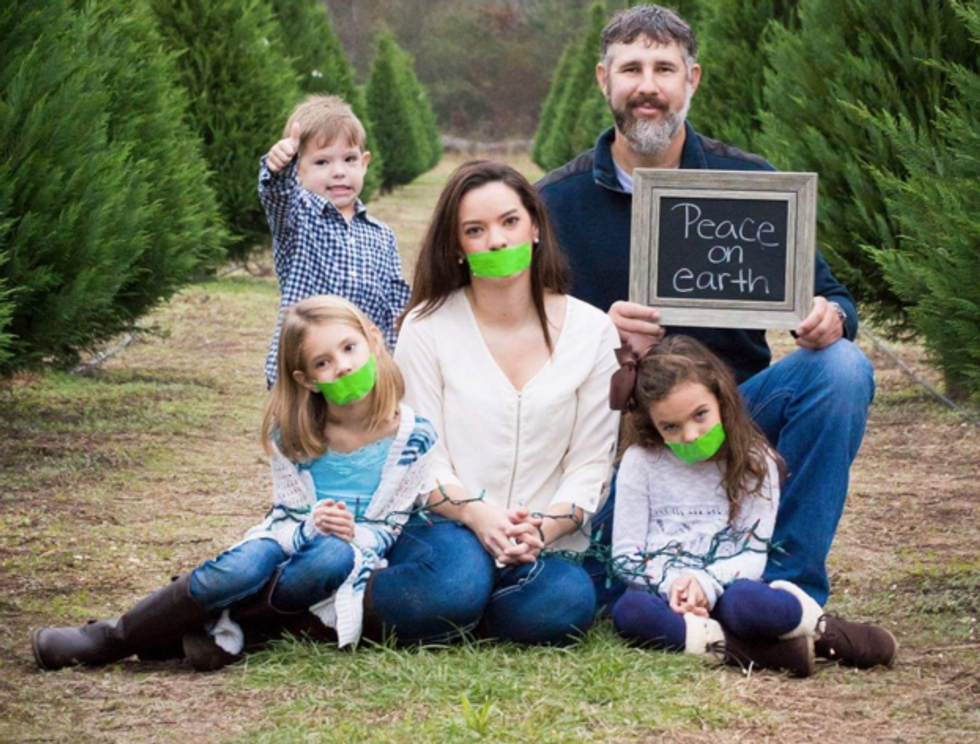 Hannah Hawkes, a Louisiana photographer, posted a family Christmas photo on her Facebook page which depicted a family of five celebrating “Peace on Earth” with Mom and two daughters with green duct tape over their mouths and their hands tied up with Christmas lights.

The Internet was not amused.

According to Inside Edition, the holiday photo, which was meant to be a joke, went viral and was quickly removed by Facebook after many expressed concerns that the image is not only not funny, but actually perpetuates a culture of violence and subjugation of women.

After receiving a flood of mostly negative comments on her Facebook page, Hawkes defended the photo:

After being silent, now isn't that ironic, I would like to speak! I have been called every name in the book, and have...

After being silent, now isn't that ironic, I would like to speak! I have been called every name in the book, and have received some very hateful and vulgar comments and messages. I would like to say that as a female I do NOT and have never promoted violence to women! I do not support abuse, or the degradation of women. My controversial photo was taken by request by the family, and was in no way meant to promote abuse. This photo was taken with humor in mind, and was meant as a comical Christmas photo. I personally know this family, and have known them for many years. They are not abusive to their children in any shape or form. Also, I would like to add that no one was harmed during the process! So everyone have a very MERRY CHRISTMAS and MAY GOD BLESS you and yours!

Unfortunately, we live in a culture that still perpetrates violence against women as evidenced by this photo. What is equally as disturbing as the duct taping of the woman and girls’ mouths and the binding of their hands is the image of the young boy behind them giving a ‘thumbs up’. It is obvious, he is already influenced. Though we are glad the photo has been removed, that people responded so strongly against it, and the photographer asserted that the photo was taken in jest, it is no laughing matter. Violence against women is commonplace and perpetuated by apathy and ignorance, as exemplified by this photo. Once again, it gives us a glimpse into the ongoing struggle to change how our culture views and treats women and girls.