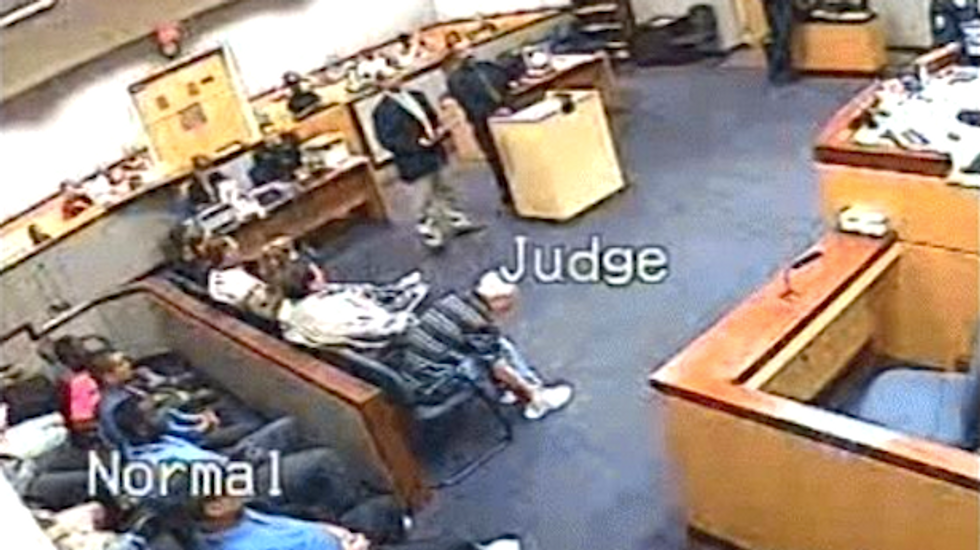 A Brevard County judge has been removed from his post by the Florida Supreme Court after he was caught on court room audio brawling with a public defense attorney, the New York Daily News reports.

Judge John C. Murphy was caught on tape last year threatening Andrew Weinstock. Weinstock says Murphy took it so far as to hit him. The two can be heard disagreeing about Weinstock's client before they take it out to the hallway.

WFTV reports court room deputies had to break the fight up between the two.

"You know if I had a rock I would throw it at you right now," Murphy says. "Stop pissing me off. Just sit down."

Weinstock says the behavior is inappropriate.

The judge then issues the throw-down offer.

"If you wanna fight, let's go out back and I'll just beat your ass," he says.

Commotion from the rumble can then be heard on the court room's audio recording. Murphy can be heard yelling, "Do you wanna f*ck with me? Do you?"

“The attorney said that immediately upon entering the hallway he was grabbed by the collar and began to be struck,” Blaise Trettis, public defender of the 18th Judicial Court, said last year. “There was no discussion, no talk, not even time for anything. Just as soon as they’re in the hallway, the attorney was grabbed.”

The Florida Supreme Court issued a statement saying Murphy's actions of "a grievous misconduct became a national spectacle and an embarrassment to Florida’s judicial system. Judge Murphy's conduct is fundamentally inconsistent with the responsibilities of judicial office and necessitates his removal."

Watch the court room recording of the incident, as posted by WFTV, here: