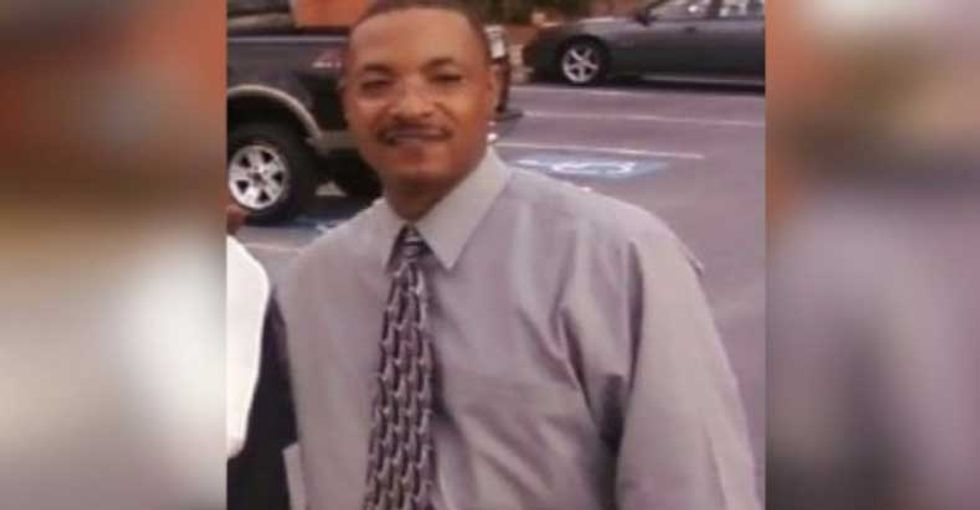 Bobby Daniels was a peace officer by trade – a private security guard employed at CNN’s headquarters in Atlanta. When he learned that his emotionally troubled 25-year-old son Bias had suffered a breakdown and was holding a fellow security guard at gunpoint in a mobile home park in Douglasville, Bobby raced to the scene. Using the skills of persuasion and patient de-escalation upon which a private peace officer must rely, Bobby persuaded his son to relinquish his handgun and place it on the hood of a car.

Just seconds later, Daniels was fatally shot – not by his mentally ill son, but by the sheriff’s deputies who had arrived on the scene.

In familiar fashion, law enforcement officials insist that the victim of this police shooting – at least the 960th to occur in 2015 – was to blame, and they have provided contradictory accounts as to how it happened.

“I think that he could have been trying to help the situation instead of hurting it, but when he pointed the gun at the officers, he was shot,” asserted Douglas County Sheriff Phil Miller in remarks to reports at the scene shortly after the December 21 incident.

A different official account provided by the Georgia Bureau of Investigation claims that as Bobby and Bias struggled over control of the gun, deputies attempted to incapacitate the younger man with a taser.

“As the fight continued between Bias and Bobby, the handgun was pointed at the deputies, at which point one of the deputy [sic] fired, striking and killing Bobby,” according to the GBI.

“There’s no doubt in my mind that my officer thought his life was in danger, and he did what he thought he had to do,” insists Sheriff Miller, according to the Atlanta Journal-Constitution.

That the deputy believed himself to be at risk is a certainty, if only because police officers are incessantly catechized about the grossly exaggerated risks of their job and marinated in misinformation about a non-existent “war on police.” That this was a potentially deadly situation was clear, as well. Daniels, who sought a non-lethal solution to the predicament, was willing to place himself at risk. The deputies, on the other hand, behaved in accordance with the “officer safety uber alles” mindset.

Eyewitness Garret Daniels, Bobby’s nephew, says that Bobby “tried to slap the gun off the car,” which may have led the deputies to think “he was trying to grab the gun probably to shoot them, but no he really wasn’t…. He was trying to protect [Bias]. That’s all he was trying to do.”

That version of events might explain why anxious deputies would have shot Bobby, but it contradicts the “official” account in which the father and son struggled over control of the gun. Speaking on behalf of the family, attorney Chris Stewart maintains that “At no point did [Bobby] touch the weapon, but for some reason the officer shot. What they should know is that they killed a victim. Bobby didn’t want anyone to be shot; he was trying to protect his son and the officers.”

Bobby Daniels, a Navy veteran, “would never ever take a gun and point it at an officer,” his grieving wife, Cynthia, insisted during a tearful press conference. “He would never do that.”

“Bobby Daniels is a veteran of the U.S. military,” attorney Stewart points out. “He is a father of five, married, a great man and the last person that would ever point a gun at an officer.” According to a press release issued by Stewart, the round that killed Bobby was “fired at a distance from an AR-15.”

Police officers, the public is told, are never off duty. The same principle applies to private peace officers, whose occupation is substantially more dangerous than that of government-employed police officers. Rick McCann, founder and CEO of Private Peace Officer International, observes that a far larger number of private security officers die in the line of duty than their public sector counterparts. Furthermore, while the overwhelming majority of on-duty police deaths happen “as a result of traffic accidents, or issues arising from training and physical conditioning,” more than eighty percent of the on-duty fatalities involving private security officers are “a result of traumatic, confrontational injury” inflicted by someone committing an act of criminal violence.

Unlike police officers, who are protected by “qualified immunity” and have no legally enforceable duty to protect an individual citizen, private security guards are fully accountable, both in civil and criminal terms, for any injury they inflict on innocent people – including liabilities that would be involved in failure to carry out their contractual obligation of protection.

Bobby Daniels was the first responder on the scene of the hostage situation, and he defused it without violence – only to be killed by government employees whose only tool is violence, and who almost certainly will not be held accountable for killing a private peace officer in the performance of his duty.