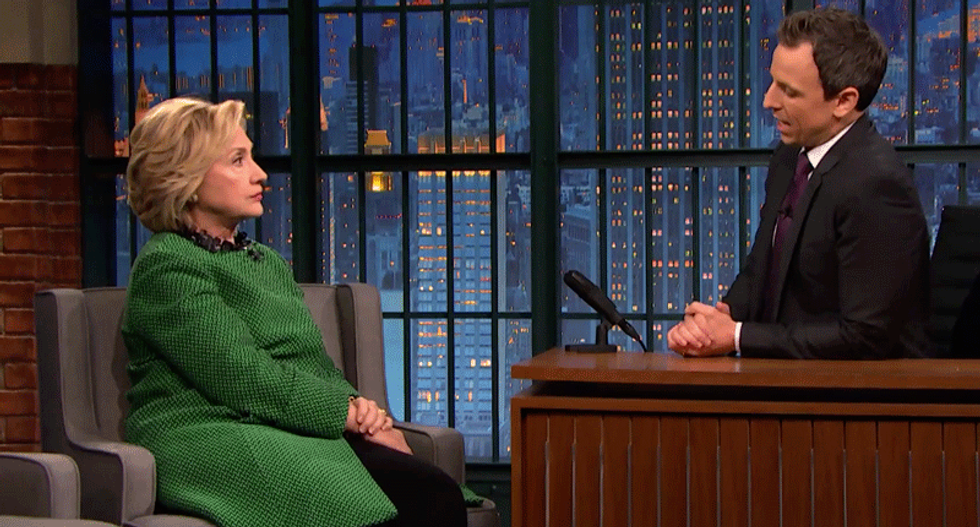 Clinton launched her attack on the billionaire during an appearance on NBC’s Late Night with Seth Meyers on Thursday, sparking loud applause from the audience.

In the aftermath of attacks by Islamic extremists in Paris and in San Bernardino, California, Trump has called for monitoring mosques and barring Muslims from entering the United States.

“I think for weeks, you know you and everybody else were just bringing folks to hysterical laughter and all of that,” Clinton told the host. “But now he has gone way over the line. And what he’s saying now is not only shameful and wrong – it’s dangerous.”

Republicans were swift to condemn Trump. His rival for the GOP nomination, Senator Lindsey Graham, told the Guardian that “Donald Trump today took xenophobia and religious bigotry to a new level”, while former vice-president Dick Cheney said in a radio interview that Trump’s plan “goes against everything we believe in”.

Despite the backlash, Trump’s divisive rhetoric seems to have struck a chord with Republican voters. More Republicans favor his proposal to ban all Muslims from entering the United States than oppose it, according to a new poll from NBC News and the Wall Street Journal . And a New York Times CBS News poll released on Thursday, the real estate mogul received support from 35% of Republican primary voters nationally.

The poll also found that seven in 10 likely Republican primary voters believe Trump is well-equipped to confront the threat of terrorism, with four in 10 “very confident” he could respond to the threat.

Clinton’s appearance rounded out the late-night talk show circuit after stints on Jimmy Kimmel Live!, the Late Show With Stephen Colbert and the Tonight Show with Jimmy Fallon.

Watch video of Clinton's appearance below: