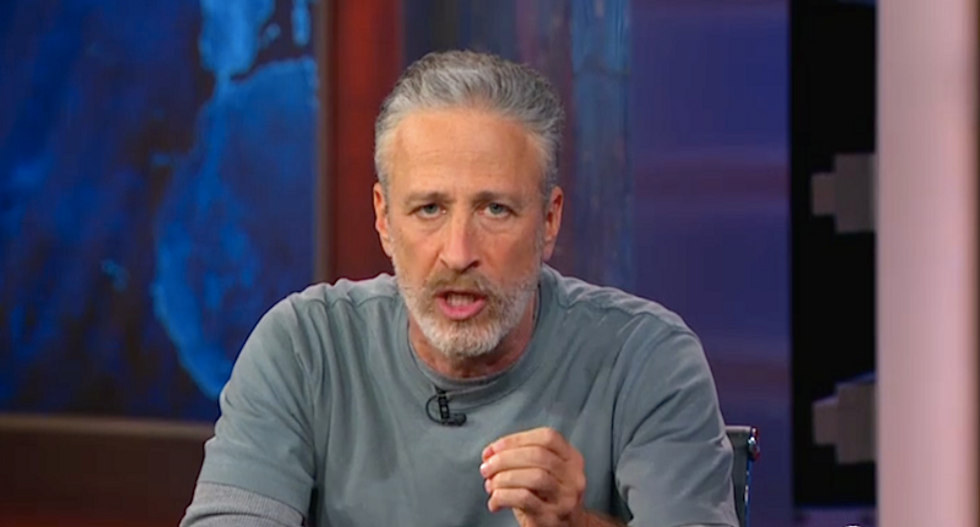 Jon Stewart came back to The Daily Show on Monday to continue his public shaming of Senate Majority Leader Mitch McConnell (R-KY) for stonewalling the extension of a bill that would guarantee health care for 9/11 first responders.

"Here's what I believe it is: Sen. Mitch McConnell of Kentucky doesn't give a sh*t about anything but politics," Stewart told Trevor Noah. "The first responders were told the Zadroga Act would be included -- they were told this last week -- in the transportation bill passed last week. Mitch McConnell of Kentucky pulled it out of the transportation bill when he didn't get concessions about loosening oil export regulations."

"So he used the health of the 9/11 first responders as a bargaining chip to make it easier to sell oil?" Noah asked.

The bill was originally passed in the wake of a December 2010 roundtable discussion Stewart hosted featuring four first-responders. But after the audience cheered Noah's suggestion that Stewart bring back the panel, the former host revealed that only one, Kenny Specht, was physically able to return to the show; two were sick as a result to their experience working after the attacks, and one died.

"This is the reality of peoples' lives that are affected by this," Stewart said, before turning to Specht. "Even the idea that you had to come here five-and-a-half years ago to plead your case on national television to get this done was insulting and embarrassing for us as a nation."

Stewart also became a correspondent for a day, showing footage of his door-to-door visits with other first responders to confront senators who voted against extending the bill, including Republican presidential candidates Rand Paul (R-KY) and Ted Cruz (R-TX).

However, he also reassured Noah that Monday's appearance was just a visit.

"Are you here to take the show back?" Noah fretted.

"Trust me, trust me," Stewart replied. "A thousand times no."

Watch the segment, as posted online, below.