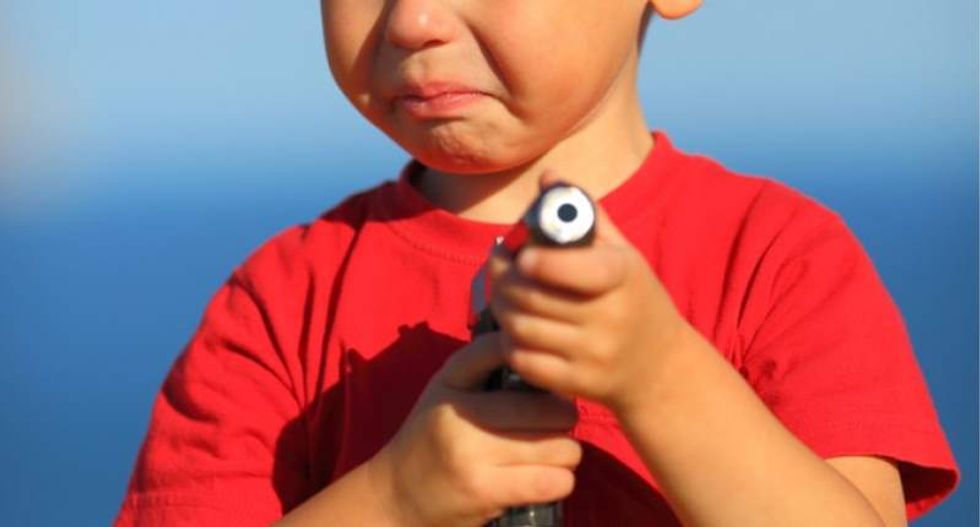 We are so shamefully attached to our guns that we would rather tell our children to run towards mayhem than support policies that may stop it.

On Tuesday, Fox News ran a segment on “how to protect yourself in an active shooter situation”. Host Elisabeth Hasselbeck opened by saying that “five seconds can mean the difference between life and death” and then introduced a self-defense instructor who demonstrated moves, with several kids [??], on how to take a gun away from a shooter terrorizing their school.

This is what America has come to – we’d rather dangerous criminals be taken on by children than support simple policies to stop them.

This Wednesday – a day when people all over the country are holding vigils for the victims of gun violence , and just a few days before the third anniversary of the massacre at Sandy Hook elementary school that left 20 first graders dead – let’s just stop acting like we have our priorities in order.

Stop calling this the “new normal” , as if the bullet-riddled bodies of children not much older than toddlers is something we should ever consider typical. Stop with the excuses. Stop with the idea that wisely regulating who gets to own a gun will lessen gun violence.

We now live in a country that sells bullet-proof blankets for children . Just stop.

These acts of preventable violence have become so frequent that it has become too easy to depersonalize the victims and lives impacted – another day, another story on the news to become outraged over. But the reverberations on individual lives remain , just as they do on our collective consciousness. And right now, we should be ashamed.

After the shooting at Umpqua community college in October, Mark Barden and Nicole Hockley – parents of Sandy Hook victims Daniel, 7, and Dylan, 6 who started an organization dedicated to ending gun violence – said , “our nation will once again enter the endless debate about gun control and gun freedom”.

“The debate goes on,” they added, “but our children need us now.”

Our children do need us. They don’t need fear , they don’t need classes on how to get a gun away from a shooter – they need grownups. Grownups who will protect them and do what needs to be done. Most Americans support sensible gun laws – so pass them already. Every day that goes by without reform is a day that we put children and families and people and loved ones in danger.

Like most parents, I imagine, I think of my daughter whenever there is a shooting. She’s in school now, and just a year younger than the children who were murdered three years ago at Sandy Hook elementary. I think about the drills she went through when she was just two years old in her preschool where she was taught to hide in the event someone came into their building with a gun. I think about the lesson that we are teaching kids – about the ways in which we do, or do not, prioritize their lives and safety.

You don’t need your gun as badly as I need my child. So, please: just stop.