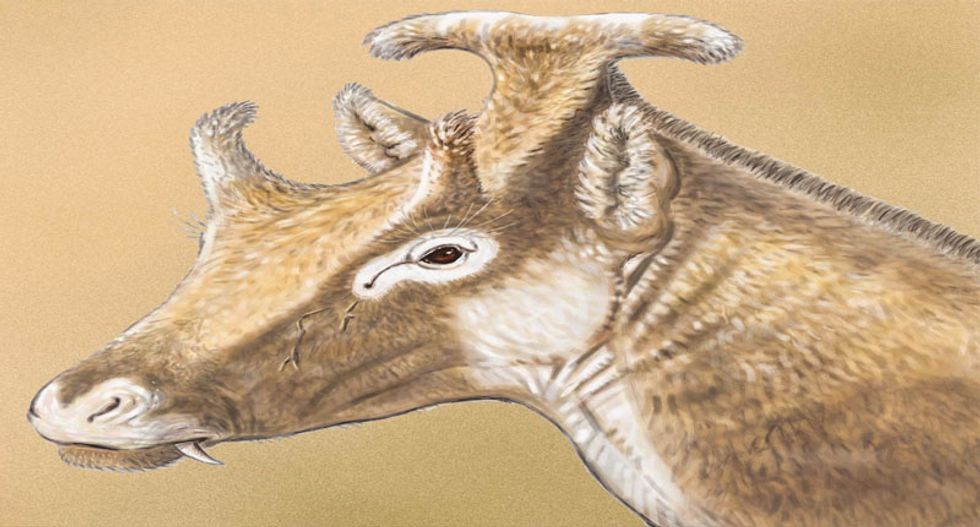 An artist' illustration shows a reconstruction of Xenokeryx amidalae, meaning "strange horn of Amidala," in this image released on December 2, 2015. REUTERS/Israel M. Sanchez/Handout via Reuters

What does a strange giraffe-like animal with three horns atop its head and a set of fangs that roamed Europe about 15 million years ago have in common with a pretty young queen from the "Star Wars" movies?

Plenty, according to the scientists who on Wednesday announced the discovery in Spain's Cuenca province of beautifully preserved fossils of this creature.

The peculiar shape of Xenokeryx's largest horn was "extremely similar to one of the hairstyles that Amidala shows off in 'Star Wars' Episode 1 when she is the queen of her home planet Naboo," said paleontologist Israel Sanchez of the National Museum of Natural History in Madrid.

Xenokeryx was a herbivore about as big as an average deer. The males had two small horns like those of a giraffe above the eyes and a larger one shaped a bit like the letter "T" on the back of the head. The males also boasted enlarged sabre-like upper canines that likely were used for display to impress other members of the species, Sanchez said.

Females were hornless and fangless.

The modern animals most closely related to Xenokeryx are the giraffe and the okapi, both found in Africa, although Xenokeryx did not have their long necks, Sanchez said.

It belongs to an extinct group of ruminants called palaeomerycids whose fossils have been found from Spain to China. Ruminants today include cattle, sheep, goats, deer, giraffes and antelopes. These mammals typically have a stomach divided into four compartments and chew a cud consisting of regurgitated, partially digested vegetation.

The discovery of the Xenokeryx fossils, one adult individual and two juveniles, enabled the scientists to determine where palaeomerycids belonged in the ruminant family tree, ending a decades-long debate, Sanchez said.

"It is strange, it posed a good phylogenetic (evolutionary history) problem, it is fun to reconstruct and it is a window to the marvels of the past," Sanchez said of Xenokeryx. "In this case, being a life-long 'Star Wars' fan, it was great to mix my two passions."

The research was published in the journal PLOS ONE.